Thereâ€™s only so much time to catch music at one of these shindigs. So this â€œguideâ€ is for the following person: you have indie, possibly NPR World CafÃ©-like earworm tastes. You like an eclectic blend, so you donâ€™t mind if a little country makes it into your brew. Still you prefer a wide variety of lyrical stylings although you tend to gravitate towards psych rock. Not only that, but distortion and fuzz are twin forces that tickle your ears rather than send them off screaming.

If this describes you, letâ€™s get this list up and running with a who’s who:

Bloody Knives. Iâ€™m into their sound just like Iâ€™m into a lot of Saint Marie Records artists these days from Drowner to Lilies on Mars to Blackstone Rangers to Strata Florida â€“ and thatâ€™s just to name a few because there are other good ones on that label. So Bloody Knives are in good company and word is theyâ€™re an awesomely energetic live show.

“Bloody Knives is based in Austin, Texas and consists of Preston Maddox (voice/bass/sounds), Jake McCown (drums), Kim Calderon (samples) and Christo Buffam (keyboards).Â  Constant touring has spread the bands reputation as an explosive live act, with dense layers of sound and blasts of noise.”

Em and the Mother Superiors sound wicked. And this is something Iâ€™ve decided that I want to see live. Iâ€™m willing to bet lead singer Emily Alexander is a goddamn firecracker on stage, and Dylan Johnson’s photos seem to suggest I’m not wrong in thinking this.Â  Plus their group has been at the fringes of my periphery for sometime now and since I do genuinely like their sound (psychedelic soul), I find myself planning to split time between them and Bloody Knives. They play 12:00 a.m. at the Bluebonnet meanwhile Bloody Knives is only a few doors away on the same side of street at Red Brick Bar. 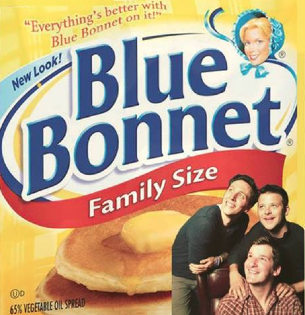 Their sense of word play and quirky pop culture leanings never fail to amuse me. The Tobias Funke flyer for their Blue Note show last year was more of the same.

Speaking of Bluebonnets: Limber Limbs. Theyâ€™re playing Friday night at 9:00 p.m. If I have to tell you where, you’re on your own.

Derek Moore, a name regular readers should know by now, is in this band. He writes okc.netâ€™s weekly LI$Ts. Iâ€™m making time to catch Derek, Ben Bowlware, and Robert Riggs that night. If you like their sound and other musical leanings, know that Limber Limbs is also a good live show. Ben keeps a tense energy about him till he’s getting into the sweeping parts of their songs, Robertâ€™s got the beat on the other two, and Derek is not only a good bassist, heâ€™s got a way with the melodica. They’ve also been testing out new material here and there.

Horse Thief is also another favorite of mine and they just released a new album called “Fear in Bliss.” They play at 3:00 p.m. Saturday on the Main Stage. Fun fact: Cameron Neal played cello on Limber Limbsâ€™ EP. Neal is also the frontman of Horse Thief. If there is a pattern that is emerging here, itâ€™s that many musicians in the OKC metro seem naturally inclined to combine their talents.

Such is the beautiful patchwork that is music.

In that vein of thought, one might think of Zorch‘s sound as a digital patchwork of glitch and frenetic energy. I’ve seen them at Womb, which is the Flaming Lips’ art gallery. It also bears mentioning that Bella Union is the home of both Horse Thief and the Lips. Zorch, however, is on theÂ Sargent House label, and they’re good live. Their songs range in length, but they’re nice and eclectic enough to be pleasingly phantasmagorical.Â  They take the outdoors Opolis Stage at 7:00 p.m. on Friday.

Local psych rockers Luna Moth are from Norman. I liked songs on their latest album “Celestial Shades.” And although I’ve always had them on my list ofÂ  “should go see,” I’ve been thwarted every time they’ve taken the stage and this latest concert date is no different. Still, if I had a time turner I’d make time for them on Saturday at 7:00 p.m. at Dreamer Concept Studios.

La Femme will be at Austin Psych Fest, just like me, the weekend after Norman Music Festival. Since Austin Psych Fest is chocked to the ever-lovin’ brim with a lot my current favorites, plus hosts strange new offerings from side projects by musicians who didn’t even make their big indie name in the genre, I’m going to see La Femme at Norman Music Festival while I can. Their album “Psycho Tropical Berlin” is psych-punk rock goes eclectic electronic, and the group is also French. Even if you don’t speak the language, I dare you not to get lost in the hypnotic trance that is their music.Â  Also know that they do not regularly tour the US, and 2014 sees them hanging around for a little bit. They take the Main stage after Horse Thief on Saturday at 4:15 p.m.

DEERPEOPLE are always fun live. Brennan Barnes is a showman and it’s not uncommon to see him climb shit on stage like a goddamn goat while getting theatrical on the mic. And if he’s in a pair of shorts you might get to see the DEERPEOPLE brand he has on his thigh. I’m told there is video of when he did it that suggests it totally hurt like a motherfucker, but that it was somehow all kind of funny. At least the person telling me this story thought it was funny. I haven’t seen it, but you should go see them on Saturday at 7:00 p.m. at the outdoor Opolis stage. They’ve also been playing some new stuff here and there.

I saw people making fun Diarrhea Planet’s name on Facebook group lists when the Norman Music Festival lineups were announced. Needless to say it is a pretty horrible name, but take heart: their music is not shitty. And they’ve played these parts before earlier in the year at Opolis. Word has it that they’re a good live show too. They play the Main Stage on Saturday at 6:45 p.m.

Feathered Rabbit I’ve heard about and listened to, but don’t think I’ve ever seen them play live. So come 1:00 a.m. at the Bluebonnet on Friday night I will have a chance to fix that.

Helen Kelter Skelter is another band I’ve heard good things about and since I like their output so far, I think they are worth checking out. They play Opolis’s outdoor stage Saturday at 6:00 p.m.

The Samuari Consquistadors have been around, but if you haven’t caught them live you can see them while drinking an excellent margarita on Tres Cantina’s patio at 12 a.m. on Friday. Remember, Norman Music Festival is the excuse to go out to see music you might have missed for one reason or another.

I like Ringo Deathstarr. And whenever I do bother to follow what is playing on obscure Indie internet radio stations, they’re a group that frequents many lists. You can catch them on the Opolis’s outdoor stage at 11 p.m. on Friday.

Power Pyramid is not on Spotify, alas, but if you like fuzz in the form of dream pop, lo-fi shoegaze this is your ticket. They play 10 p.m. at the Red Brick Bar on Friday.

Moongiant I’ve heard good things about since last year, and even as recently as this weekend.Â  You can check out more of their material at 12:30 a.m. in the Brewhouse late, late Thursday.

Caleb McGee, I’m told, is really good and will have a whole backing band at Norman Music Festival 7. He plays 2 p.m. at the Main Stage on Saturday. [EDIT: McGee reports he will be taking the Main Stage at 1:30 p.m.]

Magnificent Bird is good and I’d like to hear any new stuff they might be working on, they’re playing Dreamer’s stage at 12:00 a.m. on Saturday. I think this is a much more appropriate setting for them compared to being at the Brewhouse last year.

I’m not going to write out a separate hip hop list, but Josh Sallee, Jabee, ADDverse Effects and Bed People should be ones to watch if that is your thing. Bed People is the only female-fronted group in this handful of acts mentioned. Grace Gordon’s “Meet Pussy J” is infectious and raunchy. I’ve seen them live with friends, the group I was with wasn’t sure what to make of Bed People at first, but they were completely won over by the end of their set. If you liked this TOTALLY NSFW track, listen to “24 Hour Party People.”

And if you’re interested, Norman Music Festival also released its own official playlist where you can hear the headliners and many, many more.

Other notes? There’s an App for it. 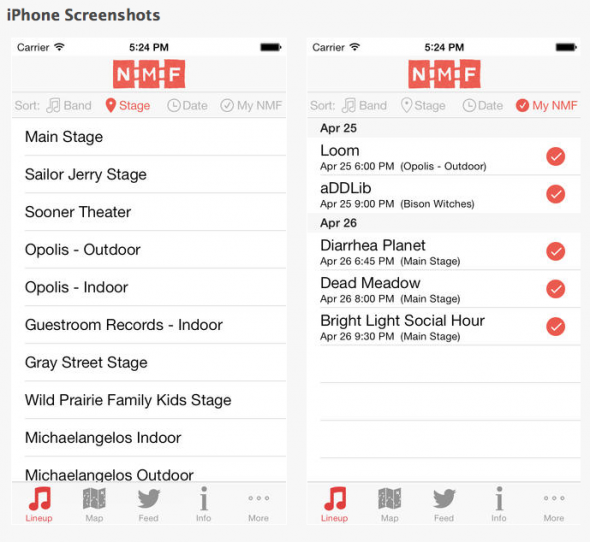