The only thing I hate about Norman Music Festival is that I won’t be able to go this year. While scrolling through the line-up, I see so many bands that I genuinely enjoy and others I’d like to hear. Even so, from a professional standpoint, the pull of Austin Psych Fest is too strong to break.

The best I can do for coverage this year is to have a team of writers, Justin Watson and James Nghiem, and a very talented freelance photographer, Dylan Johnson, document NMF 6 for okc.net. I can also share with you all a list of some of the bands I’ve been following and getting to know these past couple of years. While some of the members of these bands are friends, although by no means are they the majority, everyone on this list is on here for their talent. No bullshit. I’m going to tell you about musicians who have great stage presence and have a passion for music. My list, like me, is also a little all over the place when it comes to musical genres. So feel free to take what you like and leave the rest. Although, and this my plea for diversity, I would encourage anyone to explore outside their favorite genres. The other wonderful thing about a free music festival is that it costs you nothing to try something new. So make the most of your opportunity!

*Or in the case of Colourmusic, while not new to me, is a band I keep missing. I don’t know how that is possible, but it is highly vexing.

I have had the pleasure of seeing Sarah Reid perform at Breathing Rhythm Studio earlier this year. She’s also in Magnificent Bird with her brother Kyle Reid. More about him later. In the meantime, Sarah plays violin, guitar, and thumb pianos. With the addition of a looping pedal, it all comes together to make wonderful songs. 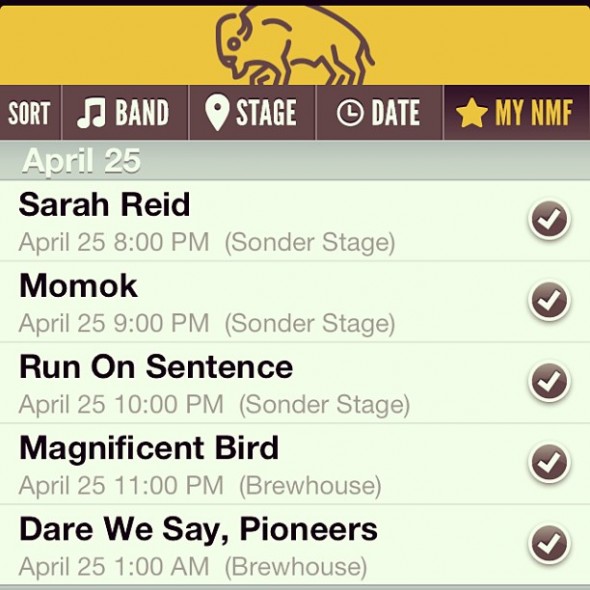 Norman Music Festival? Yeah, there’s an app for that. Photo courtesy of Sarah Reid who also says, “Come getchyo Fest on.” If you’re wondering, yes, this is her list. And yes, I got permission to share it.

I’ve seen Jordan Herrera perform with others before, and if his style of music appeals to you, go find him tonight and listen in. Plus he had fun coloring contest for his recent album’s art work.

Run On Sentence and I had a nice conversation earlier this year when I saw them at Breathing Rhythm Studio. If I make it out to Norman tonight, I’d like to catch up with Dustin Hamman and hear what he’s been up to musically. 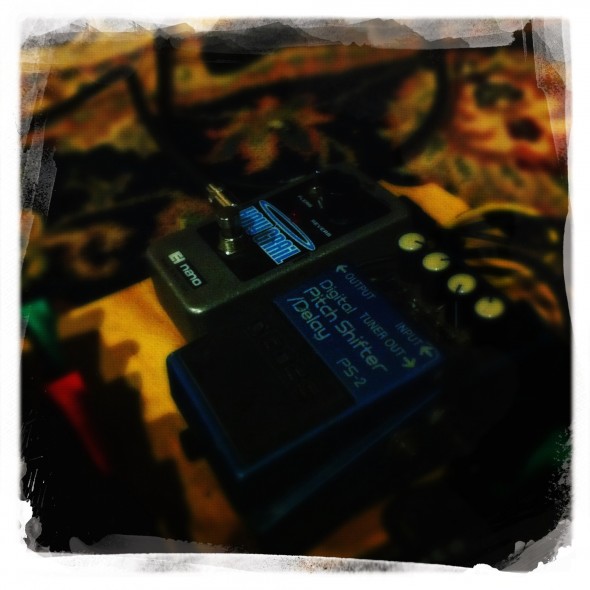 Dustin was so kind as to explain his pedal board to me too. You see, I’ve seen bigger boards before, but heard very little sound coming out of them. However, Dustin’s was of a manageable size and what’s more: lots of sound. Which just goes to show it’s not the size of your pedal board but how you use it.

I have written about Magnificent Bird Â before, but I know they’re working on new material. And since that first time I went to go see them, I’ve probably watched a handful more shows. Alright, maybe that number is more like two handfuls. They’re good. Even Justin Watson agrees. And although I was really trying not to have overlap between lists, yeah, I’m making an exception for them. Also I’ve been listening to Nathan work on this one for awhile.

The other album, which is not a rough cut.

I really like the folksy Americana sound as emulated by a band such as Barling. I don’t know what else to say other than that. You can read the interview I did with frontman Nicholas Poss to learn more about their background. I will likely sneak in their set tonight before I head out for Austin. Yes. I like them that much. I know, I know, they’re not even anywhere close to being Psych Rock, but I don’t care.

Oh, Horse Thief. Talk about another band I will try to fit in before heading out this Friday. I want to hear the new songs they’ve been working on. Check out the interview to find out about the new members and what inspires Cameron Beckham Neal to write about mountains. They’re also in the Psych Rock-Folk Rock vein. And they recently did a cover swap with The Flaming Lips (each band covered a song of the other: check Flaming Thief Horse Lips for details), who are their label mates on Bella Union.

DEERPEOPLE – Blackwatch – Friday – 4/26/13 11:00 PM
Listen people, I have seen them play live many, many times. They never fail to put on a hell of a show, this is something okc.net writer Shannon Moham discovered recently as well when she went to their Kamps show a couple of weekends ago. They are an eclectic and endearing bunch. Brennan Barnes has so much energy, if you aren’t dancing around crazy, you might be immune to joy and ecstatic flights of happiness. Also there may or may not be confetti. You’ve been warned.

Fire Wolf – STASH – Friday – 4/26/13 7:00 PM
Fire Wolf’s frontman, Darell Amos, I met through a friend when we all went to go see My Morning Jacket in Tulsa. Ah, music and good times. I remember he told me he was a drummer and that he’d been in another band (which is somewhere on this list) but ultimately decided to form his own band. Fire Wolf is that band. I rely on my intuition a lot: sometimes it is wrong, sometimes it is not. But I had a pretty good feeling about Darell’s drumming abilities.Â  When Fire Wolf finally debuted last year at Downtown Sound in Norman, it was good to hear that I was not wrong. They’re kind of blusey-garagey-surfish-psych-rock. And if you like that, you should go check them out. They have pretty good energy, and I’ve seen Darell break drum sticks while playing songs.

I know Derek Moore, bassist for Limber Limbs (nÃ©e People People), because he also plays bass for DEERPEOPLE. Here’s the deal. I kind of heard them live. One 2nd Friday Art Walk I was walking with my family past Opolis and heard music I liked emanating from within. Curious to find out who was playing, I quickly peeked in and found out it was Limber Limbs. I was a little bummed I couldn’t stay. And while my husband is accommodating of my little addictions, he did not look amused when I suggested that I could stay for their set and he could take the kids to Gray Owl to wait on me. Ah, it was worth a shot to see if he would go for the idea. But give their EP a listen, I’m confident you’ll hear why they deserve attention.

I’ve only seen Joey Paz play a couple times. Once acoustically and another time with brother Dallos Paz and a couple of others as a full band. He’s in the psych rock vein.

Kyle plays with just about every band from here to OKC and beyond. He’s also got solo work and makes cigar box guitars. In short: he’s ridiculously talented. I interviewed him about his EP Sawdust in My Bed. But if you haven’t managed to catch him at some point, which I’m not judging (see: Colourmusic), you should try to get out and see him Saturday afternoon.

I’ve seen Samantha Crain perform before, alas, I’ve yet to see her do any new material. But her new album is pretty damn good. Colin wrote about Kid Face. And remember how I said Kyle Reid plays with everybody in this state? Yeah, he’s on her new album too. Here’s her brand new video for “The Pattern Has Changed.”

If you like hip hop, you’ve probably heard of Jabee, and if you haven’t you might want to check him and others out on Stash’s Hip Hop showcase line up.

Tanner Blair described his music to me as bit of an eclectic mix. He’s also an engineering student. I’ve not heard him play live before, but I would be curious to see how he’s developed his sound over these past few months.

“I have been building an analog drum synth, and I put in an insane number of hours getting the sequencer and the patches working. When it started working this song came out of it.” – Tanner Blair as to the genesis of “Digital Heart.”

Brittany Dalton clued me into this band as she wrote a whole interview about them.

Seriously. I cannot believe I am missing them yet again. How is this even possible!?!?! I swear the universe is conspiring against me. The fate of these teddy bears may as well be my expectations of seeing this band anytime soonish.

Jacob Abello is not new to me, but I’ve never seen him play a whole set before, which is a shame. I think I saw him very briefly one night a long, long time ago. He’d also been gunning for a slot on American Idol. Other things you should know? This song might knock you up.

I dig their sound and were I in Norman Saturday, you bet your sweet ass I’d be watching them play the Main Stage.

I’m not entirely sure how I came to hear of the Admirals. But they caught my ear, and that’s enough for wandering over to see them play were I around this weekend.

I met Keirston White for the first time this past Tuesday because she was singing back up for a friend. We got to talking about going out to the Woody Guthrie Folk Festival and music in general, and I found myself curious as to what her music sounds like. So I looked up a video of her via Casey Friedman’s Acoustic Oklahoma Showcase.

I heard about Power Pyramid through Elizabeth Dowds, and later through the guys who run Dust House Recording Studios, read: Atlee Hickerson and Austin Tackett. If you like shoegaze, you might like Power Pyramid.

Body Breakers – Dreamer Concepts – Saturday – 4/27/13 1:00 PM
No clue, but kind of intrigued since I have friends that like them and a wild card livens things up, plus they bill themselves as a punk outfit. Check’em on Facebook.

Another musician I’ve heard plenty of buzz about, but have never seen play live. His style is folksy Americana.

Love Cobra – Bluebonnet – Saturday – 4/28/13 1:00 AM
Founding memebers Josh Henning (drums) and Nate Wooldridge (guitar, vocals) have been collaborating for over a decade. Which has yielded a cohesive blend of stoner, deathpunk, and classic metal. And again, I have friends in Norman who like them. Also a wild card. Were I at NMF, I’d take my own advice and try out a genre I’m not usually keen to listen to. Check’em out on Facebook.

Oh, did I say I only had two wish lists? Sike. The mom in me would take my kids to the honorable mentions were I in town. As it is, I’m sending my husband to these places with the kids in addition to taking them to check out the Dustbowl Arts Market.