Here at okc.net I get random samples of music. Because I love music so much, I’m willing to listen to a lot of it. Or at least give it a fair shot.Â  This means you might find me (or members of our writing collective) at various venues, or when we are waylaid with other business or family issues then it becomes a matter of when we can make it out to the next show. This Sunday there’s a fair chance we will be at Form + Function catching acoustic sets featuring Magnificent Bird,Â Sea Couch, Young Readers, Luna Moth, and Nathan D’Coby Richards. 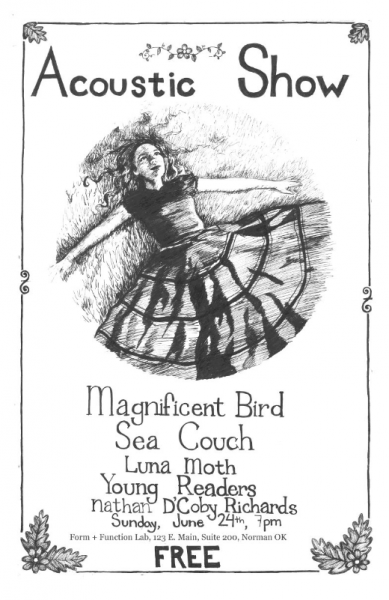 I appreciate that there aren’t any birds on this poster; trend-wise it’s a nice change of pace. Poster art by Erin Elise.

All said, this is not my first brush with Magnificent Bird. A few years ago I remember searching for local music via the Oklahoma Rocks blog. It was the first iteration of Magnificent Bird that had peaked my interest, but then some time went on, and life went on, and then tadaa I find our paths have crossed again. So their most recent work, “Superdark Can Happen To Anyone,” quickly caught my attention. And by quickly, I mean there’s a sort of darkly melodic yet ambient tone that is consistent throughout the album. Their percussive elements have a pensive quality, most notably heard in songs like “The Married Woman,” and in “Awful.” And since I lack Daniel Page’s extensive musical training, I couldn’t tell you if all the instrumentals kept time perfectly.Â  I can, however, write about lyrics and the kind of expansive sound you can expect to hear.

The songs on “Superdark Can Happen To Anyone” are layered, and what I like most about the album is that it maintains that dark tone, which lends well to having an overall cohesiveness, yet it retains enough variety of sound to be enjoyably different from track to track. Lead vocals are primarily sung by Nathan Lofties, but there are a few songs like “Lazy Daisy,” and “No Where to Hide” that are sung by ex-band member Tiffany Criswell.Â  Actually, “No Where to Hide” reminds me of PJ Harvey circa “White Chalk.” There’s some experimental elements laced throughout the songs, and lyrically the themes are confessional. On Magnificent Bird’s bandcamp page they describe their sound as:Â ambient, cowboy indie, indie rock, and space. All of these are fitting tags. What other bands or artists am I reminded of listening to this? Well, on “Superdark” I’m strongly reminded of Sufjan Stevens, mostly this has to do with the execution of the chorus, but only if someone took one of Sufjan Stevens sweet upbeat songs that’s still sad (like Casimir Pulaski Day) and laced it with a dose of Mount Eerie (O My Heart) or Sun Kil Moon (Third and Seneca). All said, I did enjoy the vast majority of this album.

Naturally, I became curious and wanted to know more about Magnificent Bird.

okc.net: Who is in the band?

okc.net: When did it start?

Lofties: I’ve been recording music by myself since I was a teenager, but this project started about six years ago when I started sporadically recording with some friends. I took it seriously, but I wasn’t doing much about it, and there were a few years of general inactivity until I got it in me to finish the first full length. Over the course of the last year I lost a very talented band member, but Steve got on board and has put as much faith and time into this project as I have, and then the Reids got involved and everything just felt like it was falling into place, so in a lot of ways it feels like we’re just starting out. It feels like a brand new band.

okc.net: How many albums do you have?

Lofties: Just the one full length, Superdark Can Happen to Anyone, which was finished last year. We’re in the middle of recording a follow up in Boaz’s studio, which will be less of me sitting in my bedroom writing all the parts by myself and more of getting everyone involved in the creative process. I’m no longer King and Tyrant. Just President for Life.

okc.net: How do you classify your sound?

Lofties: That’s such a hard question to answer, but I need to come up with something because no one identifies with rambling, long-winded explanations or comparisons to landscapes.

okc.net: Who are your influences?

Lofties: Musically, I grew up a post-rock junkie, and that build-to-a-climax, ethereal style of music was very rooted in my brain. But, I got older and I started wanting to hear someone tell me something, and I eventually fell in love with artists like Smog and Silver Jews; people who could capture your attention so easily with so few moving parts. That forced me to try and be a better lyricist. I don’t want to record twenty minute rambling instrumentals. I want to capture that same expansive feeling and condense it into a four minute song about why being in your 20s in 2012 is slightly terrifying.

okc.net: Both Colin and I have weathered our 20s; it can be slightly terrifying at various stages.

okc.net: What’s the deal with your videos – are those cult movies or scavenged films or ???

Lofties: The video for “Awful” was footage taken from this old Swedish or Finnish movie about the history of witchcraft. The other videos were actually old home movies from a friend’s family archives. They fit the mood of the songs very well, and I like that they give the impression that we’re the world’s quietest Satanic band.

okc net: We speculated that there was no way the movie used in “Awful” was produced in America in the 20-30s. Colin said something about Americans and Chaplin, I mentioned “Birth of a Nation.” None of these American examples are as striking in imagery as what we saw in the “Awful” video. Our best guesses had been: France, Germany, or Sweden.

okc.net: Do you have a special talent, perhaps fire breathing, a specialty bird call, or maybe you are great at drawing stick dinosaurs?

Lofties: Everything has been focused on music for so long that I’m not sure how else to describe myself. I just recently got pretty good at cooking. I managed to pay off my car earlier this year, which I think is more impressive than breathing fire.

Also, most people don’t realize that *I* was actually Andy Warhol’s muse.

okc.net: Being Andy Warhol’s muse is good. But, paying off your car is even better.

Lofties: I would hope I haven’t discovered it yet. If I did I’d probably be too old to be in a band.

Lofties; Playing as a two piece at Galileo’s (now Picasso’s) and clearing the place out in about five minutes. The patrons apparently didn’t want to hear our interpretations of Eric Satie’s music.

Lofties: We actually haven’t toured yet. We’re in the beginning stages of planning a few tours after we finish the next record. But as soon as we get out there and have a good experience, you’ll be the first person I e-mail.

okc.net: If you‘ve never toured with a band, tell me about your worst groupie, or if you’ve never had a groupie, what’s the best local show you’ve ever played?

Lofties: There have been a few, but probably the best was our CD release at Form + Function last year. We had complete control over the environment and were able to make it a very personal event and a good number of people showed up to listen. The end of that show is the only time in my life I’ve received a standing ovation.

okc.net: We hope it’s not the last. We love to be at shows where musicians get that kind of treatment. It means a very good time was had by all.

To that end, here are a few examples of the music that will be played Sunday evening starting at 7 in Form + Function, which is located at 123 E Main St. in Norman.

One comment to “From Magnificent Bird to Young Readers: It’s An Acoustic Evening For Listeners”