First things first: it is free and open to all ages.

Horse Thief’s 2014 album “Fear in Bliss” is a favorite of mine. I realize a lot of people tend to make hyperbolic statements when describing their “favorite” anythings. So, to clarify, I bought “Fear in Bliss” on blue vinyl, attended their album release show in OKC, and added the album’s closer “Warm Regards” to my songs from 2014 playlist. We won’t delve into other concert dates, but pretty much if I can make one of their shows, I do.

Although, and this just goes to show how a good song sneaks up on you no matter what you’re preoccupied with, I recently found myself unwittingly head bopping along as I edited a photo on my phone during their practice session at City Presbyterian (829 NW 13th St) this past Thursday. I’m not saying I’m resistant to it, but it’s just “The Devil” and “Already Dead” (that finger picking that turns into strumming is so rhythmic) were ones that even had me toe tapping too. 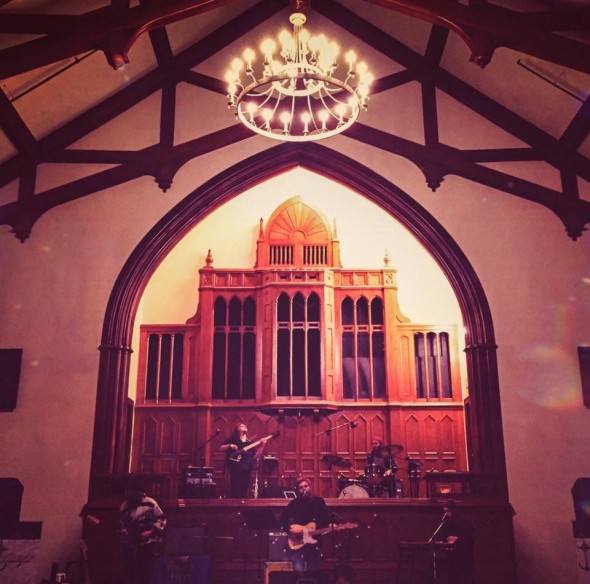 I also got to preview what is sure to become a new favorite called “Mountain Town”. Cameron Neal, guitarist and lead, said of the song: “We have a temporary title for it, but the whole song is about the craving for youth, like as you grow older you always want to be younger and you can’t really change that. You have to live in the moment and embrace who you are now.”

Bonus: listening to some experimental stuff guitarist Alex Coleman tinkered around with on his new pedal board setup.

“I got a midi controller that allows me to control as many of my pedals as I want from the push of a single button,” said Coleman. “It has presets and all that good stuff. I also got a new modulation pedal and a new delay pedal made by a company called Strymon to add to my Big Sky Strymon Reverb pedal I already had previously. Those three pedals together are referred to as the “Strymon trilogy,” which I’ve been wanting for years now! That combination was a lot of what was making the dreamy, spacey sound you were talking about.”

Neal said they’re working on a second album with themes covering America, conformity, and the pursuit of happiness. Unlike “Fear in Bliss,” which is focused around themes about anxiety, Neal said, “I’m trying to go for the fear of an American life, of like the representation of what people expect you to be in America. And how that’s diluted and how there’s so much more to it than that.”

It’s here where I asked if Neal if he’d heard of “Ishmael,” a book that talks about an idea called mother culture and social expectations.

Neal, “Yeah. Like you got have the white picket fence, the two story house, and live in the suburbs. I feel like that culture is pushed on a lot of people and it drives a lot of people crazy. I think there are a lot of people out there that aren’t comfortable in doing what they love because they fear that they won’t be successful. And I’m trying to get that theme across on the record. I’m trying to get a lot of different things on there about what the American lifestyle is.”

For those who don’t know, members of Horse Thief hold down other jobs too. And Neal is no stranger to odd juxtapositions. Sometimes he’s the front man of a rising indie band who tours the world playing music for small and large crowds alike, festivals too, and sometimes he’s working a fast food job. The latter he said is humbling, this was by way of a past interview when I toured their OKC studio last year. I should have asked him if he still had that job, but it slipped my mind.

Neal said Bella Union, thanks to the efforts of Abbey Raymonde, is producing a documentary of the band and their work on the second album. This also means taking Raymonde around various parts of OKC, like Guestroom Records, ACM, and other little places in the metro, like a brand new bar that Neal says they’re (Horse Thief) in love with called The Power House, it’s in the Old Public Farmers Market district near Urban Agrarian and one of the best antique malls in the city.

Horse Thief’s song writing style centers on Neal coming up with lyrics while other members Cody Fowler | bass, Alberto Roubert | drums, Alex Coleman | guitar, and Zach Zeller | keys contribute music. As mentioned earlier, I heard Coleman playing around with his newly stream lined process. I also asked Zeller a little bit more about this experimental place they’ve been working in, he said, “Where I’m kind of at right now is exploring new sounds with keyboards and really with computers too. Like using that as an instrument, really I’ve been a guitar player, and Horse Thief’s one of the first bands where I fully play keys, so for me it’s still kind of new territory and it’s gotten me to dig deeper because there’s always a new sound out there.” Zeller also said for synth inspiration he’s been listening to a lot of Baths and similar artists.

City Presbyterian as a music venue is pretty good. Midtown Music 2 was great here and there’s another quarterly Songwriter series that also likes to make use of this building’s acoustics. It’s a gift from City Presbyterian pastor Bobby Griffith. And for those of us who just want to go have a drink (which will be available on site), sit down and watch a music show like you’re there to pay reverence, this is the place. Plus there will be live visuals played throughout Horse Thief’s set. Chad Mount, another OKC artist, aims to provide a unique experience for those going to Saturday night’s show.

Mount said people can “expect a night of beauty on multiple levels, delivered in a way that people aren’t maybe quite used to seeing around these parts. No strobes or swirling lights.” He also said, “I wish I had the budget to map the entire room!“Â  Below is an example of non-swirling lights and strobes.

Pageantry opens the show on Saturday night, they’re from Dallas, and they’re great. I’ve seen them a couple times now, and I love their dreamy sound. Neal said Horse Thief has played with them several times the past couple of years and has heard the new material they’re working on, which he says sounds dreamy and should be perfect for a venue such as City Pres.

P.S. Amplifan (a sponsor) is giving away a little something, something that night too.