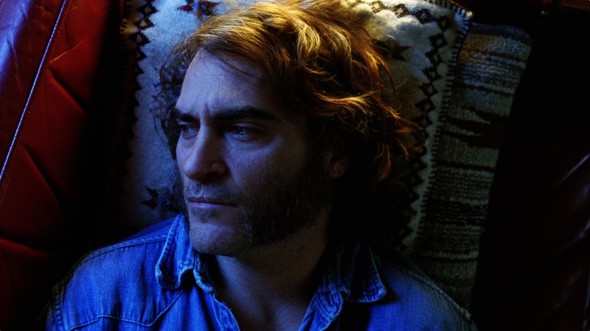 “ Imaginative nonconformity was in the air: Picasso, Joyce, Freud, Stravinsky, Schoenberg, and others were breaking conventional bonds. Charging this atmosphere was a conception of the universe in which space and time and the properties of particles seemed based on the vagaries of observations. “

There’s probably not a film rule that’s unbroken in Paul Thomas Anderson’s 7th work, Inherent Vice, a riff on one ofÂ Thomas Pynchon’s lesser received, but funnier, novels. In a film with few establishing shots the first is squeezed between beach shacks. Then we go straight into the close up of Joaquin’sÂ resting face, just off the bus from theÂ loco trip of The Master, and dumped into another pungent time, 1970,Â 3 years after the ideals of the counter culture broke and caused the wave,Â says Hunter S.Â Thompson, to roll back.Â Â Phoenix’s character, private eye Doc Sportello,Â happily didn’t get the memo. Stoned, heÂ keepsÂ his late night-TV-watchin’ dirty feet days alive.

The lovely lady, Shasta Fay Hepworth, (Katherine Waterston) interrupts his groove andÂ asksÂ Doc ifÂ he can help find a missing person. He is Michael Wolfmann, her lover. He is a real estate developer. He might be tied up with neo-Nazis, though he is Jewish. The trouble might come from his wife, who is unusually close to her Spiritual Adviser. The conversation between Shasta and DocÂ plays long and seemingly without anchor.Â All the convos here are airy and freewheeling. TheÂ vague substances in the air, though, eventually produceÂ melancholy, as it slowly seeps into the master actor’s expressions for Shasta,Â his ex.Â Doc takes the job anyway. 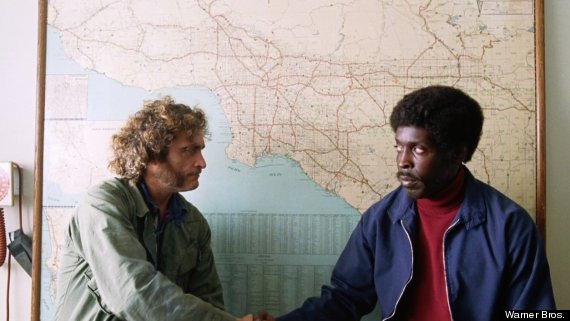 Doc works in an actual doctor’s office.Â A joke aboutÂ his name that becomes an actual setting. There he interviews a black radical Tariq Khalil (Michael Kenneth Williams: Boardwalk Empire/The Wire) for an inordinate amount of time, Doc drifting out of the frame saying, “right on,” writingÂ  unspecific things in his notebook. “Paranoia.” “Something Spanish.” Tariq leads him to an ex-heroin junkie Hope HarlingenÂ (Jena Malone) who mentions theÂ deceasedÂ father of her (heroin) baby, Coy (Owen Wilson), another missing person. Coy drifts into Doc’s life in a night time fog shot of painful intrigue. The voices in the air and the slow zooms reminiscent of Anderson hero Robert Altman in The Long Goodbye, another detectiveÂ story with voices from a dying counterculture.

Coy isn’t absent from his wife’s life because he wants to be. He’s trapped, working off a debt for Hope byÂ anonymouslyÂ aiding a wing of The Golden Fang, a vertically integrated society of corporations, drug cartels, dentists,Â shady policemen,Â WASPY CEOsÂ and intelligence rings.Â Coy, a saxophonist at heart, isÂ running counter-subversive missions.Â Doc sees Coy heckling Richard Nixon on TV and thinks he’s dreaming. But the Golden Fang is out to make the hippies lookÂ bad. And just when Shasta’s hippy dippy ways influenced Michael Wolfman, heÂ declares heÂ is going to start giving away his housing, then disappears. 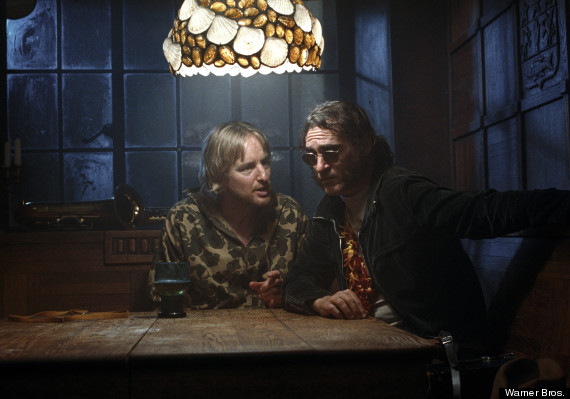 Coy talks to Doc quietly, inÂ a sad and almostÂ giddy improvised exchange that takes place at a Hippie Last Supper (con Pizza)Â in a home so extravagant that to watch most of it be ignored for a kitchen conversation is to speak of the insane confidenceÂ in PTÂ Anderson. Confident that he knows the energies he’s looking for and the abundance of materials at his disposal. 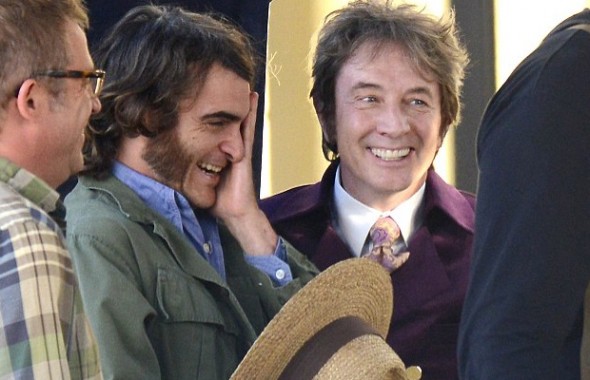 There are plenty of characters and conspiracy theories and dead ends. The two other most substantial ones to mention:Â Â Martin Short as a coke sniffing dentist, Rudy,Â presumably involved with the Fang, and for sure involved with drifting high hippie chicks –and his secretary. Doc knows one ofÂ  Rudy’sÂ playthings, he once hunted her down and brought her back to her richÂ father Crocker FenwayÂ (Martin Donovan; who will come into Â play hardcoreÂ later). The other key guy is detective Bigfoot Bjornson (Josh Brolin), an imposing bruiser of a cop whose bluster, he seems to know, isn’t nearly as big as the powers that be.

He and Doc are rivals in a sense and from different worlds: the straight and the stoned. Watching this movie it occurred to me that these two worlds exist today, too.Â Â Bjornson has to work jobs, advertising real estate and being an extra on Dragnet type cop shows (one Doc might be watching when dialing a booty call to an assistant Distract Attorney friend–Reese Witherspoon). Bjornson’s pathologies and secret weirdnesses erupt in fights with Doc, one slow mo beauty where DocÂ randomly throws himself on Bigfoot’s cop car; Bjornson scrapes Doc off without a beat. Dirty hippies. The extra scene space Anderson gives Brolin is significant, and his beautifully weird performance cues us to see the system stifles all kinds, not just the dopers. 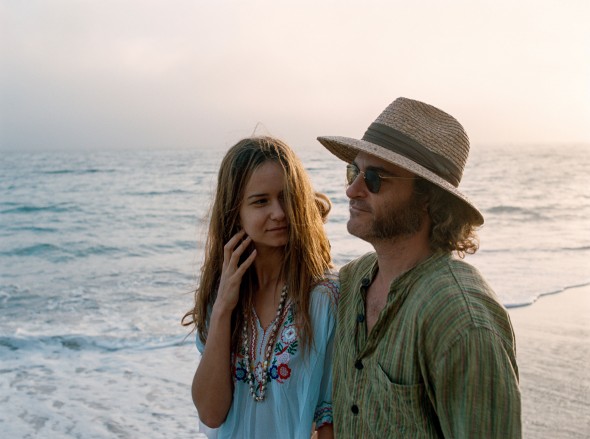 The women in Inherent Vice are significant because they are beautiful. They also serve as important messengers for the detective. Sortilege (Joanna Newsom) the narrator is available for astrological and personal advice when Doc needs it. Deputy DA Penny Kimball (Witherspoon) has nighttime tenderness for DocÂ but also a steely day life; she’s able to extract hard information from the legal world. Shasta is the womanÂ with an aura so strong that it keeps Doc, despite Joaquin’s expert idiot poker face, going. She disappears, as womenÂ do, and reappears, as women also do. More importantly, she returns from aÂ dark side of life later in the film, and communicates to us the sexual-spiritual cost of what happens when the power structure exploits bohemian innocence and utopian ideals. Or was Free Love ever really free?

I have extracted these plot points after a day of trying to remember the most importantÂ parts of the story.Â It’s a script that will driveÂ some out ofÂ the theater. The actorsÂ run over theÂ fine pointsÂ and shed punch linesÂ like they are bad omens. Could it be, a script that’s not this weird is a sign of vanity?Â An aesthete will coast along Inherent ViceÂ fine with the Can or Neil Young song playing, or the spontaneous gestures of fine actors given freedom.Â The script isÂ spoken (incomprehensibly by Phoenix and BenicioÂ Del Toro) (comprehensively byÂ Wilson, Brolin and Newsom)Â with so much twisty dialogueÂ that never lets up over the course of this 2 and a half hour trip. It’s a movie apparentlyÂ made for no one but the lone genius Thomas Pynchon, age 77, Â a reclusive author no one can find and whose works literary nerds pore over like sacred pop culture cryptograms. 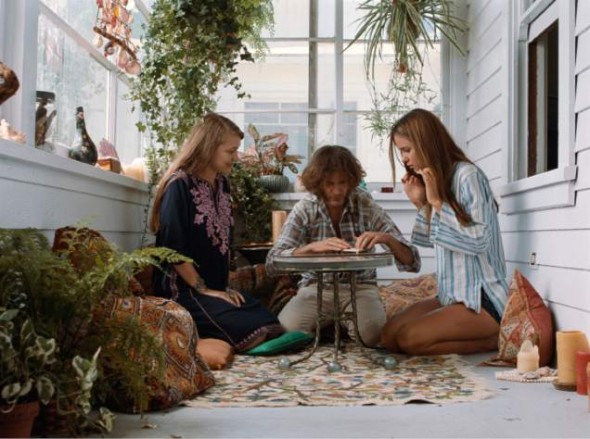 But it’s not reallyÂ any critic’s place to ignore the signs and wonders the canonical writer has allowed to be passed to screen. Anderson has framed the jazzed story within the passing of a subculture, from weed to heroin, from free sex to prostitution, from neighborhoods to suburbs, etc. In the midst of this transition the landscape indeed becomes vague. Doc enters a rehabilitation clinicÂ (presumably pricier than AA) and thinks heÂ sees a thug with a Nazi tattoo. The tour guide sweatily assures him that’s a Hindu sign. Maybe vague observations are best. The denture smile from an ex addict named HopeÂ leads to rows of dentist chairs inside a sky scraper shaped like a fang. The ship at sea is not just for show, but it brings in the heroin from the country that the government is bringing warÂ that will bring the young people to the dentist and then to the rehab spa where patientsÂ dress like monks. If Doc makes the right connections, then Bigfoot Bjornson might stash a load of drugs to be found in his Dodge Dart.

Anderson faithfully transmits the signs to unfurlingÂ cinematic ground in a way that feels foggy, rhythmic, realisticÂ and fragile. Â But what I’m guessing gave Anderson more mojo were the ways in which Pynchon reminded him of ideas, California woes and problemsÂ he’s been probing his whole career. The never quite right bond of father and son, says an image of Bigfoot Bjornson at his home bar, son in cowboy costume refilling his Johnnie Walker Red bottle without him even noticing. The long confession of Shasta and subsequent rough sex scene, not to mention the number of chocolate covered bananas Bigfoot has, speaks to Anderson’sÂ endless ways of seeing people useÂ the sexual act in unsexy ways–the women of Boogie Nights are in despair, the sex Guru in Magnolia is broken, the cult leader’s wife in The Master uses a hand job as cold method of control.

Pynchon’s is a kind of writing so visionary that it seems to need to be obscured by more reams of description and diversion. The film stock cinematography, the fugitive sprays of light, California’s physical beautyÂ is enough to intoxicate, but the spoken, info-heavy language does the same, often making the viewer feel lost.Â Never in a bad way. And every now and then Anderson will find an image or “bit” (watch Marty Short) that jacks us into attention.

All the while though, aÂ sneaky eternalÂ thread is making its way to a cinema moment– one that somehow took me back to Boogie Nights’ last act in its concern for family. The pathos of it surprised me, and its warmth holds a flameÂ to some ofÂ Pynchon’sÂ icier sentences: “American lifeÂ was a thing to be escaped.”

No, not for those whoÂ brave the table with the Golden Fang, as Doc does with Crocker Fenway, as Freddie Quell did The Master. It’s a creepy and intense exchange framed just as The Master’s ending was. The deal that Doc brokers withÂ the man of powerÂ is driven home in California sunlight. Phoenix’s enigmatic acting had you thinking he’s not detecting at all. But the astrology hintedÂ at by cross dissolves of Doc and his Ladies, at love to the stars,Â perhapsÂ alwaysÂ charted Doc’s mission. Remembering the sliver of goldenÂ past as if it were with him,Â he driftsÂ throughÂ the rapidlyÂ encroachingÂ Corporate land, with just enough life in his eyesÂ to navigate the signs. And a clue to rescue a few who, unaware of theÂ power in theirÂ beauty, became theÂ ones to be exploited.