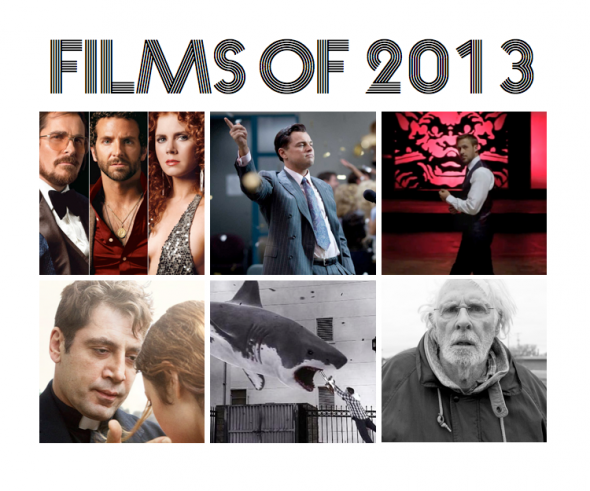 There isÂ some controversy about The Wolf of Wall Street. This is a credit to the artist in Martin Scorsese.Â I think it’s generally an importantÂ thing that people see a work of art that makes them uncomfortable.

In the case of Wall Street criminals, they’ve hardly been punished in our culture. We can say these barbarians are not like us, yetÂ their philosophies are written in our colleges, and the sounds of their grunts heard at our sporting events.Â TheÂ wolvesÂ live with us, and their actions are in some of our dreams.Â Â Though Scorsese’s hyper expressionistic goggles make the bacchanal of Straford Oakmont look excessive and perhaps unrealistic, there’s a very real presence to the primal energy coursing through this movie.

Jonah Hill is an essential ingredient in making the Scorsese-DiCaprio marriage relevant and interesting again. There’s one Quaalude malfunction between these two goons that will certainlyÂ go on the all-time Scorsese highlight reel.Â Â His character Donnie is a Joe Pesci with some added mutations and hilarious Bill Brasky teeth. Together they become animals. I appreciate that none of the characters in this film are cool. In that sense, this is not as a romanticized account of criminality like “Goodfellas” andÂ “Casino.” Believe it or not, there’s some real religious feelingÂ behind this, as it was inÂ “Raging Bull” and “Who’s That Knocking on My Door,” Â and we areÂ watching a modern day Sodom and Gomorrah.Â It can be hard to watch, fun to watch. One thing is for sure, this is the most passionate picture the old master has made since “Raging Bull.” To viewers who think Scorsese is just indulging his id, or being creepy, I would say there’s a last shot that showsÂ he has more on his mind, an image thatÂ jolted and haunted me into staying in my seat all the way through the credits. I couldn’t ask more of cinema.

2. Nebraska (dir. Alexander Payne) – This comedy also has some teeth. In black and white and road tripping through the depression we remember the photos of Walker Evans and The Last Picture Show. Bruce Dern as Woody Grant gives a career performance of blunt desolation that has its own language and complexity, a lot of it coming from the silent film past. The history of one manâ€™s life is told in hints and fragments from people who knew him in forgotten towns. In Woody Guthrieâ€™s America people held out hope with a song. In Woody Grantâ€™s they hardly know where they are, or what hit them.

3.Â  The Butler (dir. Lee Daniels) – A radical filmmaker walks into the life of an ordinary man and finds himself humbled.. Lee Daniels offers an inclusive cinema. I donâ€™t think thereâ€™s anything in Daniels that will ever conform to stereotype. Whether itâ€™s Matthew McConaughey and Macy Gray hanging out in a kitchen of the underrated â€œPaperboyâ€, or Forest Whitakerâ€™s Cecil Gaines caretaking to the beloved John Fitzgerald Kennedy, as the great white manâ€™s addisonâ€™s disease needed the underclassâ€™s love, too.

4. Spring Breakers (dir. Harmony Korine) – Almost as much of a mixed media installation as a film. Selena Gomez, the teen star, was not informed about the nature of some of the scenes she would be in. Itâ€™s not a feel good film. Yet the heart is with an everlasting youthful longing in this one. They make old souls. Harmony is a young soul. Only an outsider like Korine could hit us with this vision of debauchery, well meaning prayer groups, Britney Spears tributes, oozies. The movie feels like it happened in a flash.

5. Gravity (dir. Alfonso Cuaron) – Sandra Bullock plays an atheist doctor whose desolate dilemma up in space causes her to think creatively about how to survive. The Mexican mind behind this picture take us to the middle of nowhere, and it really feels like nowhere. My favorite Sandra performance yet.

6. 12 Years a Slave (dir. Steve McQueen) – A visceral wake up call to those of us who think we know our history. The story works as an Odyssean tale of Coming Home, but itâ€™s also the expertly crafted realism of a new filmmaker guided by intuition more than words.

7. Hannah Arendt (dir. Margarethe von Trotta) – At times this movie looks like it couldâ€™ve been made for TV, but itâ€™s about the greatest issue ever fought over, the freedom of the mind. When German-Jewish writer Hannah Arendt reports on the trial of Nazi Adolf Eichmann she finds the man boring, not evil. In writing her original theory of evil, American readers became uncomfortable, and sent her threats and angry notes. Her bosses at The New School begin to push her out. Director Margarethe Von Trotta, a favorite actress of Rainer Werner Fassbinderâ€™s, has preserved an important piece of history from a time when the countryâ€™s intellectuals were influential. Here is the moment where they started being pushed into obscurity.

8. Only God Forgives (dir. Nicholas Winding Refn) – Vulgar, hillarious, violent, chilling. Gosling is a creative actor who has found a friend in Nicholas Refn, who keeps discovering things about violence no one knew existed. Amazing soundtrack.

9. The Spectacular Now (dir. James Ponsoldt) So many high school memories, so many movies about them. But this one gets it. Ponsoldt turns out to be obsessed with his protagonistâ€™s (Miles Teller) alcoholism, as he was in his last film Smashed. Thereâ€™s a breakthrough of the heart somewhere here that equals a movie like Goodwill Huntingâ€™s, um, goodwill.

10. Phil Spector (dir. David Mamet) -Â  My favorite lady performance of the year. Helen Mirren plays a strong lawyer who is sick with pneumonia and spearheads a case defending a mad man, Al Pacinoâ€™s Phil Spector. Her pursuit of the truth leads her to an empathy with Spector that the actress reveals in surreptitious glances. Mirrenâ€™s weary integrity, and hidden affection, outshines Pacinoâ€™s somewhat lazy performance. I watch this curious story, David Mamet still writing strong, every time itâ€™s on HBO. As Pacino says, itâ€™s about â€œdefending the artist.â€ Spector did it on John Lennonâ€™s Plastic Ono Band record. And Mirren and Mamet do it here.

Close but no Cigar

To the Wonder, Malick crafts a wonderful companion to “Tree of Life.” ShotÂ in Bartlesville, Oklahoma.

Mud, Â Divorce and adventure through a kid’s eyes.

The Place Beyond the Pines, ambitious and assured effort from Blue Valentine director.

Behind the Candelabra, Â Soderbergh still at the top of his game. Expert deployment of Scott Bakula and Rob Lowe.

Broken City (dir. Allen Hughes) – Itâ€™s possible that Tupac Shakur assaulted Allen Hughes during the filming of “Menace II Society” because he really was a prophet and knew that Hughes would end up making this movie. Complete corporate crap, this stinker canâ€™t even get the Mark Wahlberg character’s alcohol problem right. The hired hand, who is essentially good, watches his actress girlfriend act in a sex scene and it sends Marky Mark to the bar, then careening down the super blurry streets. Yet he can continue drinking casually the rest of this film without it being an issue. Why bring up his 7-year sobriety at all? See “Spectacular Now” and “Wolf of Wall Street” for addiction stories.

Elsewhere every character is a soulless stereotype. Russell Croweâ€™s conservative hypocrite politician, Jefferey Wrightâ€™s man in the shadows, and try as he might, Barry Pepperâ€™s progressive politician has no personality either. This is supposed to be a movie about political corruption but it has no intelligence. All the people are as boringly calculated as our basic stereotypes about the political process could be. How can a script, director and entire film crew sap all the energy from talented millionaire actors?

Maybe someone should put Wahlberg on probation. He seems to be in a lot of this stuff lately.

Identity Thief (dir. Seth Gordon ) – This movie stars Jason Bateman, who along with Adam Scott, can be taken as boring case studies in American mediocrity. Melissa McCarthy has a funny personâ€™s gift, but itâ€™s harmed by no variations on her â€œoutrageousâ€ style. I predict the gross out, self-aware-gross-American style practiced by her, Galifinakis, Seth Rogen, Evan Goldberg and others is on its way out. And then we will be a tiny step closer to that more perfect union.

Man of Steel (dir. Zack Snyder) – This film represents a lapse in my intellectual judgment. I gave it a decent review because I was thinking my middle school film class kids would like it. They did like it. But that doesnâ€™t make it close to good. Nor does Kevin Costner getting sucked up by a tornado (the only image of the film I can remember today). The director Zack Snyder had more style when he was creeping on muscly dudes in underwear (300).

Sharknado (Dir. The Corporation of Mass Movie Production and Distraction and out on Netflix right now) – Oh you watched this because you knew it was going to be so bad you just had to see it? Just like Snakes on a Plane! Well the creators of this minor pop culture event have figured you out with precise elementary math, as someone dumb enough to think you’re smart, and with enough human energy to post a status update about Sharknado before hitting up the Taco Bell.* 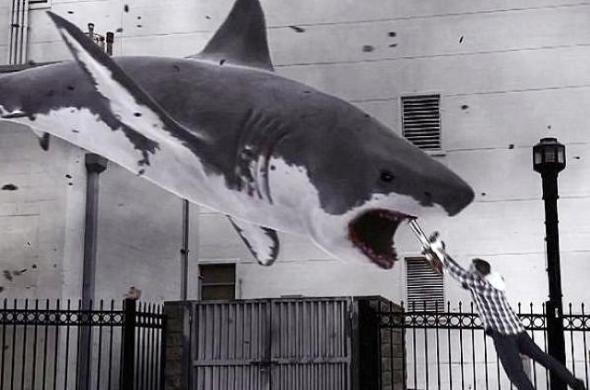 *Editor’s note: Yep. That’s me. And I totally watched it with my kids as we predicted with near 100% accuracy who was going to die next. We even got Taco Bell one night. Maybe it was that night. Thanks for reading! Check Mickey Reece’s list to see what other films you might have missed this past year.