American Hustle opens Dec 20th.Â The second-to-last paragraph contains somewhat of a spoiler. This review is a three and a half to four star review, and it runs a little long because we wanted to also explore some of the life of a volatile, but ultimately significant American artist as he blazes through a film hot streak.

â€œAs far as I could tell, people were conning each other all the time to get what they wantedâ€¦â€

Irving Rosenfeldâ€™s life is his best costume. The director, David O. Russell, and the actor playing Rosenfeld, Christian Bale, donâ€™t waste time letting Â the show begin. Â Before the explosion of sensory pleasures that is this movie, Bale and Russell linger all over a quiet long shot of Rosenfeld fixing his greasy hair into a gnarly combover, that Amy Adams will later tell us is an elaborate style. It takes more than a minute to maintain the artifice.

Rosenfeld is a con-man, and has been since he saw his dad get the shaft as a glass retailer. Living a life of honesty only to be duped by less honest men doesnâ€™t appeal to a man with Rosenfeldâ€™s vitality. He places his energy into the counterfeit artworks he hocks and other effective scams. This attractive energy about the lumpy man is evident during a rowdy indoor pool party — a set designed of tacky gold and East Coast lower-middle class splendor thatâ€™s in the same ballpark as Robert DeNiroâ€™s Christmas turtleneck in â€œThe Silver Linings Playbook.” At the “pah-tee” Rosenfeld finds a willing listener in Sydney Prosser (a raw-eyed Amy Adams). She looks at him and sees that hereâ€™s a man with a head of little hair, a beer belly, but thereâ€™s something about him. Watch him enthuse over Duke Ellingtonâ€™s â€œJeepâ€™s Blues,â€ as Ellingtonâ€™s bawdy, careful/careless brass goes blowing through the speaker. Sheâ€™s in love and is able to maintain this attraction throughout a long movieÂ hurling tests at their love (his current marriage, say), the numerous role reversals, and the probably the sexiest scene ever shot in back of a dry cleaners. 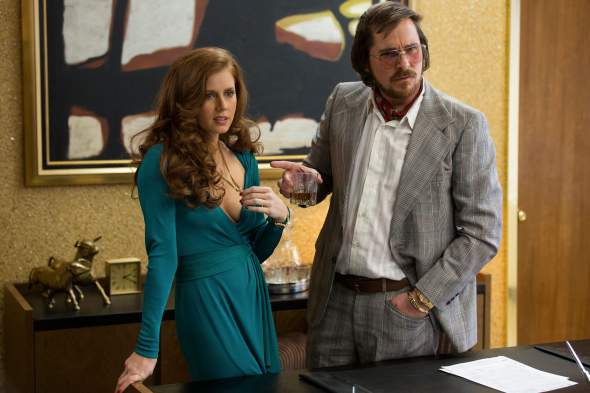 Since all good things end, the honeymoon phase of Rosenfeld and Prosser’s partnership gets cramped by an FBI agent, a man of unique style, for Bradley Cooper’s Agent DiMaso is man who insists on perming his straight hair into tight curls. He is the kind of guy who forces his level headed colleagues into complicated operations and on occasion steam rolls through his social obligations so he can take his “not-fiancee” to the nearest disco club. He sees how cool Rosenfeld and Prosser are, and with the vision of an ambitiousÂ cop decides to trap them into a scheme where they all take down major politicians, one of which is the real life Mayor Carmine Polito (a wonderful Jeremy Renner). Prosser tells Irving that sheâ€™s going to make DiMaso fall in love with her because if they let the FBI in on their scheme, â€œtheyâ€™ll need the extra move.â€ From here Rosenfeldâ€™s Â honeymoon cons with her are over. They are tangled up with theÂ feds and will soon be dealing with politicos and the Atlantic City mob. 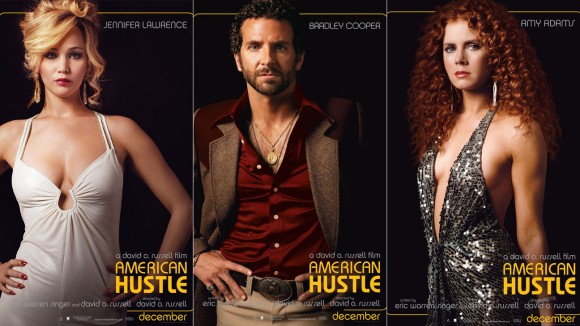 But even as Irvingâ€™s doing the tough hustle, he canâ€™t help but make people fall in love with him. Not long after befriending Mayor Polito, the man of the people buysÂ Irving a microwave. The meaningful gift is ruined by Rosenfeldâ€™s nervous wife Rosalyn, played with twisted energy and humor by Jennifer Lawrence. Irving moans over the gift that was bought for him, and Lawrence, ignoring her hubbyâ€™s first true gift of friendship, throws poison darts right back. â€œI read in an article that that machine was taking all the nutrition out of our food.â€ He doubts sheâ€™s read an article. Rosalyn produces the article for him.

You get an idea of how quick a Russell script is, most of the blocking, hyper-camera swooping, and improvised arguments bear resemblance to a style of near chaotic filming Russell pretty much mastered in â€œThe Silver Linings Playbook,â€ a movie about love between two manic depressives. But behind the directorial razzmatazz I also sensed a more traditionally Shakespearean influence; the Shakespeare who said that all of life was a stage, and that a woman of twelve was smarter than a man of fifty.

Irvingâ€™s life is his costume, and his is genius. Sydney knows exactly how to get in. The first time that Irving decides to drop the con and show Sydney the room where he prepares his fraudulent art, he has laid bare to another person the complete truth of his life. The people person in David Russell knows intimacy is hard. Amy Adams storms out of the room in mock disgust and Bale yells â€œI really enjoyed getting to know you!â€ He crawls back to his desk in defeat, muttering to himself. But Sydney comes back, and with a British accent. Sheâ€™s created a character and that is the woman who will be his partner. She extends her hand. The initial attraction is matched and heightened by her fucking with him when he was at his most vulnerable. The actors play it pitch perfect, and the writer has hidden layers of feeling beneath one smooth scene. Irving is nearly reduced to tears she was so good at playing him.

This sense of human affection has not come easy to David Russellâ€™s rugged vision, and so feels more explosive in its goodwill. His first Sundance hit â€œSpanking the Monkeyâ€ was a movie about incest and mother-son weirdness that understandably struck skepticism into the heart of Faye Dunaway, who when a no-named Russell showed up on her doorstep told him no, that she did not want her own kid to see her mother like that. Russell said, thatâ€™s more the reason she should do it! Â Because it would give a mother and son an example of how not to be! Dunaway laughed in his face. A failed con.

The disco-era of Russellâ€™s youth doesnâ€™t hurt his new hand. He sticks with dancing, lights fizzing the fuzz of â€œSaturday Night Feverâ€™sâ€ idiot romances, with singing and drinking, double-dates where it feels like the camera is performing a childâ€™s cartwheels. The soundtrack choices are unpretentious and fit: Donna Summer, Bee Gees, America, Elton John, Tom Jones. The essential fun of â€œAmerican Hustleâ€ draws us into an underworld of cons and conniving that weâ€™ve seen a million times before. Russell knows we have, but at this comfortable point in his career I think he just wants to let his own vitality run free.

Remember how his more philosophical vision was stunted in every way by the conceptual impossibility of his earlier piece â€œI Heart Huckabees,â€ and by a prickly actressÂ (Lilly Tomlin)Â who wasnâ€™t on the same page with him inÂ an You Tube classic fight scene (since taken offline). And somehow the way things happened on the set of Russellâ€™s â€œThree Kings,â€ George Clooney couldnâ€™t see that the movie he was in was going to be a masterpiece, a new kind of war film in 2000Â thatÂ reignited the cinema along withÂ with Paul Thomas Anderson’s “Magnolia,” Fincher’s “Fight Club,” Alexander Payne’s “Election,” Almodovar’s “All About My Mother,” and Spike Jonze’s “Being John Malkovich.” If director and actor had both known that, maybe Clooney wouldnâ€™t have been on the receiving end of Russellâ€™s headbutt, and Russell in a stranglehold. Â Here in “American Hustle,” Bradley Cooper has his critics, but Russell is not one of them. Instead he arms Coop with a big phone to beat a bureaucrat with.

Russell is a fighter. He knows these are hard times that the audience has been living through too. All the (outsized) characters in the past three films have been pretty hard scrabble: a public school teacher, citizens of “The Fighter’s”Â Lowell, Mass bummed about their crack reputation, and here a two bit con man hangs on by a string, decent-hearted amid a world of crazed ambition addicts in government, law enforcement, and the mafia. As for Russellâ€™s new foundÂ audience, maybe some of them are sitting on their $7 lawn chairs looking at the disintegrating neighborhood and wondering why they canâ€™t at least walk down the street and see a movie with characters they likeÂ who arenâ€™t zombies. Men and women having good sex and honest fighting, and, God forbid, a happy ending. Remember “Silver Linings Playbook” was tough-minded, but unapologetic for ending like a fairy tale.

Do we need the fairy tale or the truth? I think Russell has worked hard enough. But he could use a bit of both. Hopefully he will go somewhere else with his style. I admit there are a few gags in “American Hustle” that feel crammed into the movie. There’s a running gag about ice fishingÂ with Bradley Cooper and Louis CK that only to tries to make Cooper funnier than he is.Â But nevertheless itâ€™s ultimately satisfying that Russell is at full play. He is clearly in the company of actors who love working with him and can handle his terrible demands. Christian Bale, Bradley Cooper, Jennifer Lawrence, Amy Adams, Shea Whigham, and the old master DeNiro, who has let himself be conned into a partnership with a great director again.

Theyâ€™ve returned to the play. They may go to war with their director, but it seems that all parties involved find in Russell something similar to Shakespeareâ€™s comedian Falstaff, who in Henry IV looks on a bloody and depressing battlefield and says with deep certainty, â€œGive me life.â€