I want to say it’s been close to a year since the conversation JamesÂ Nghiem and I had at the Norman McNellie’s. We’d run into each other because we’d come to Opolis to see DEERPEOPLE. While the band was unloading equipment, it was decided that we’d go play catch up where it was warm. Naturally we got to talking about our respective long-term projects. I don’t exactly remember the impetus for the idea, if James had told me that night, but I do remember he was working on a sort of homage to Kevin Smith’s 1994 cult classic “Clerks.” (For the record, it kills me to label any movie from 1994 a “classic.”) Originally James intended for the spoof to be uploaded to YouTube by April 1st as a very elaborate April Fools joke.

Like anything that starts out as an incredibly ambitious idea, sometimes the execution takes you in unforeseen directions. I remember as we walked through downtown Norman on the way back to Opolis that James stopped to talk to various members of local bands. His goal: to get covers of songs on the original Clerks soundtrack to use in this re-imagined version. Over the next several months we exchanged some dialogue about the project. Between steady employment, his comedy label Robot Saves City, having his band The Nghiems recognized for Best Music Video at Norman Music Festival 5, and the “Clerks Too” movie, he also had a conceptual art show at Downtown Sound called HORSE. James, if you haven’t noticed, is a busy guy.

About a week and half ago I got my copy of “Clerks Too.” Just in time for the Fowler VW sponsored Post-Apocalypse Bash.Â  To be honest, I wasn’t really sure what to expect. A shot-for-shot remake of a film is an ambitious project to take on just as an elaborate joke. After having viewed it, I can say unequivocally that there is more to it than that. For one thing, this is not a replica as much as an unintentional postmodern meta-critique. To help viewers distinguish between the two frameworks of storytelling, all the scenes where new characters discuss the production of the movie are shown in color. Other scenes faithful to “Clerks” are shown in black and white, with exception of the David Lynch homage. It was not in the original movie, clearly, but for the sake of continuity in the meta story arc, this particular scene needed to have the same production style as the “remake-would-be-original” scenes.

The mirror within a mirror within a box of mirrors weirdness goes even further. I would say the new storyline of the “meta arc,” a term that I think I just made up, also reflects the original content in many ways. Actor Josh Lathe plays both characters of Josh the Director/Dante Hicks. His ex-girlfriend Sam, as played by Whitney Wallace, is back in town and wants a favor. Sam is an acting student at NYU and she wants her ex-boyfriend, Josh the Director, to help her stand out by featuring her in this remake of “Clerks.” Complications arise when we discover she wants to play every female role. Whereas the original Dante Hicks character drops out of college, Josh the Director graduated with a degree in film studies, yet cannot seem to make his own films. But Josh is willing to help Sam in the hopes that working on the project with her will reanimate their dead romance. Like Dante, Josh is kind of a procrastinator too. And what better way to illustrate this point then watching a montage of the months that pass by as Josh the Director tries to work on it. However Sam doesn’t make it easy on him, and later we learn why as cuts to a “Real World” style confessional booth reveal her true intentions for Josh. I don’t want to give anything away, but I think it works in the favor of “Clerks Too” that it clocks in at about 30 mins, which is the perfect length for a parody of sorts. A deeply ponderous philosophical exploration about how the lives of people in Norman,Oklahoma circa 2012 are not all that different from those of the people in Leonardo, New Jersey circa 1993, this is not. Although one could make the argument that Norman does have a way of trapping people in its bubble.

okc.net: Where is this gas station you’re shooting at? Also, what made you decide to choose this particular movie?

Nghiem: It was actually two gas stations at first. But we settled on Neighborhood Grocery in Slaughterville in the end. The exterior shots were actually Opolis in Norman with Quickstop Groceryâ€™s sign pasted over it. I picked â€œClerksâ€ because I always loved that movie growing up and looking at the type of equipment I had access to, I didnâ€™t think it would be too difficult replicating the look of the film.

okc.net: How did you cast these roles, anyone turn you down or did everyone say yes the first time you asked them? I noticed you had a montage of people who didn’t exactly have parts, can you tell me a little more about that too?

Nghiem: I tried to cast people I thought would be good in the parts. I had some actors whoâ€™s schedules just didnâ€™t fit with our shooting schedule so that was really tough. The montage of parts were actually from scenes that we shot. We shot a lot more of Clerks than what shows up in the finished product.

okc.net:Â Ok, so you’re kind of breaking the 4th wall here and doing some meta commentary, what was the thought process behind this choice, I mean, it seems like it morphed from an April Fools joke and now there’s another story framework about a flailing college graduate trying desperately to get back with a manipulative ex-girlfriend. Was that planned all along and is this how you’re by-passing copyright infringement too?

Nghiem: This was not the original plan and thereâ€™s a lot of reasons this movie ended up like this. In retrospect, I think watching a shot-for-shot remake of an entire movie might feel like a chore to an audience whoâ€™s seen the original. I wanted this project to have some fresh parts. I wanted it to be something fun to watch even if itâ€™s not the most polished piece of work we couldâ€™ve done. 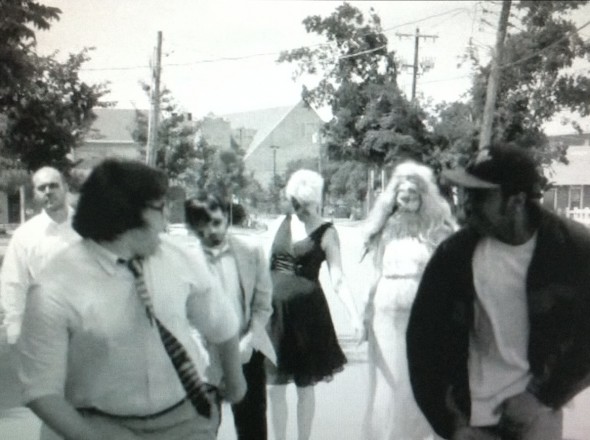 okc.net: The bands! I noticed Chewbacca was listed in the credits, where was the song in the movie (this is more for me than anything else). That’s really all I have to ask about that one and can I get Brine Webb’s cover of “Can’t Even Tell?” Actually #4 is a very selfish question.

Nghiem: Hahahaâ€¦Chewbaca was used during the David Lynche-y dream sequence thing. When I release the movie on Youtube, I want to have the entire soundtrack offered as a free download on Bandcamp.com. I gotta talk to the bands about this though, but it should be coming early next year.

okc.net: The original had “act” breaks, and I’ve seen that you’ve taken the opportunity to use these to deviate from the original script to introduce parts of the new story, like the act break entitled “Clerks meets David Lynch” – what was the impetus behind that choice? 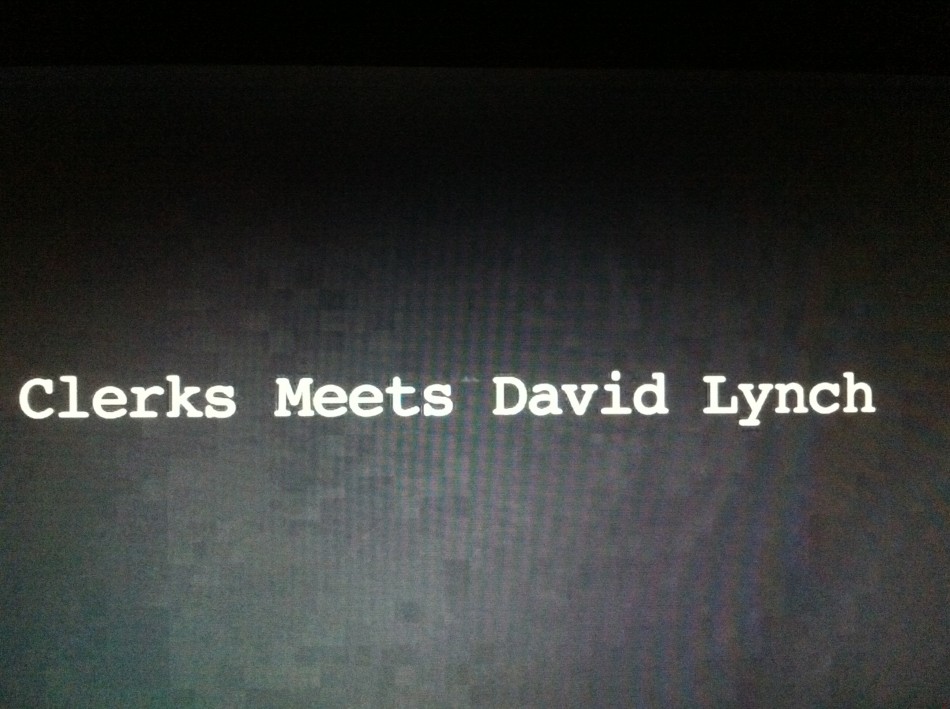 Wherein “Clerks” gets mashed-up with “Twin Peaks.” Because they are from the 90s, get it.

Nghiem: Well, I tried not to deviate too much. I just tried give the ones from the original a double meaning. For instance, the original â€œClerksâ€ has a slate with the word “Juxtaposition.” I used “Juxtaposition” too, but with a different relationship in the context of this movie.

okc.net: What were the biggest challenges of shooting this movie? And did you mean for it to be this kind of hodgepodge all along?

Nghiem: The two biggest challenges were organizing everyone and getting set locations. Filming around so many peopleâ€™s unique schedules was crazy hard. Some of the scenes required a lot of actors, and if someone didnâ€™t show up on time it would push the entire day of shooting back. And since I didnâ€™t own or work at convenience store, getting people to agree to let us keep doing this in their store was pretty hard. I didnâ€™t have any budget for the movie so getting sound guys and crew to come out was also a challenge. I have a lot of friends who are sound guys, but eventually I run out of favors, you know? At the end it was just the actors and my camera showing up. I think overall, this was a big learning experience for me and everyone involved. When I make another movie, Iâ€™m gonna find a way to pay everybody and do a better job of handling the little things. Or Iâ€™m gonna just pay someone else to handle all the little things.

okc.net: How much did it cost you both in time and money?

Nghiem: I came up with the idea in October in 2011, started shooting in February 2012 and finished shooting in November. I donâ€™t how much it actually cost, but Iâ€™m guessing a grand for the whole year. Which isnâ€™t a lot in terms of how much movies cost, but for me itâ€™s kind of a depressing thought.

okc.net: Tell me about the show on Saturday Dec. 22nd.

Nghiem: Itâ€™s an OKC Comedy show. OKC Comedy wanted to really showcase some different things that are going on in this state in terms of comedy. They approached Robot Saves City about doing something for the show and I thought it was a good time to show people what weâ€™ve been working on. Thereâ€™s gonna be a lot of comedy that night from OKC Comedy and also a lot of other groups whoâ€™ve been working and putting shows together.

okc.net: So after you show it, do you plan to upload it to YouTube or ???

Nghiem: I have one more screening in Norman on January 25th at Mainsite Art Gallery. Then itâ€™s to Youtube.

okc.net: Does Kevin Smith know about this? lol I’m guessing not from the last line on the screen. Are you worried about getting sued, or do you think this falls under fair use and/or parody?

Nghiem: I donâ€™t think he knows. Heâ€™s probably too busy to worry about something so random. I donâ€™t think he would sue us. He seems like a cool guy. I just talked to a lot of lawyer friends about it, and half of them seemed really worried about me.

okc.net: What haven’t I asked that you think is important that people know either about what went into the making of this movie or the premier on Saturday?

Nghiem: I think this is important to say: Josh Lathe (who plays Dante) and Kashif Mustafa (who plays Randal)Â  are amazing, talented people. I canâ€™t say that enough.

okc.net: Are you planning on shooting an original movie now that you’ve done this?

Nghiem: Yes I am. I got nine pages written already.

okc.net: What is your favorite scene and/or line from the original “Clerks?”

Nghiem: Itâ€™s really vulgar. You sure you wanna know?

okc.net:Â I’m not exactly an angel myself when it comes to dropping F bombs in my writing.

okc.net: What is your favorite scene and/or line from “Clerks Too?”

Nghiem: Thatâ€™s a tough one. Iâ€™ll go with Kash not being able to pronounce Eileen. 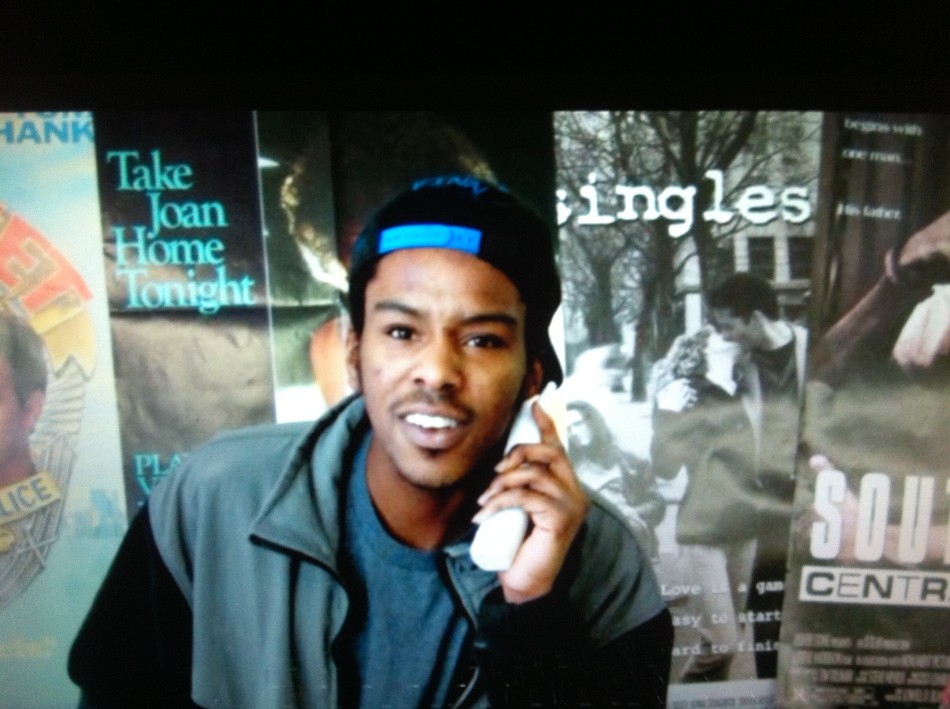 Dexys Midnight Runners is lost on him.