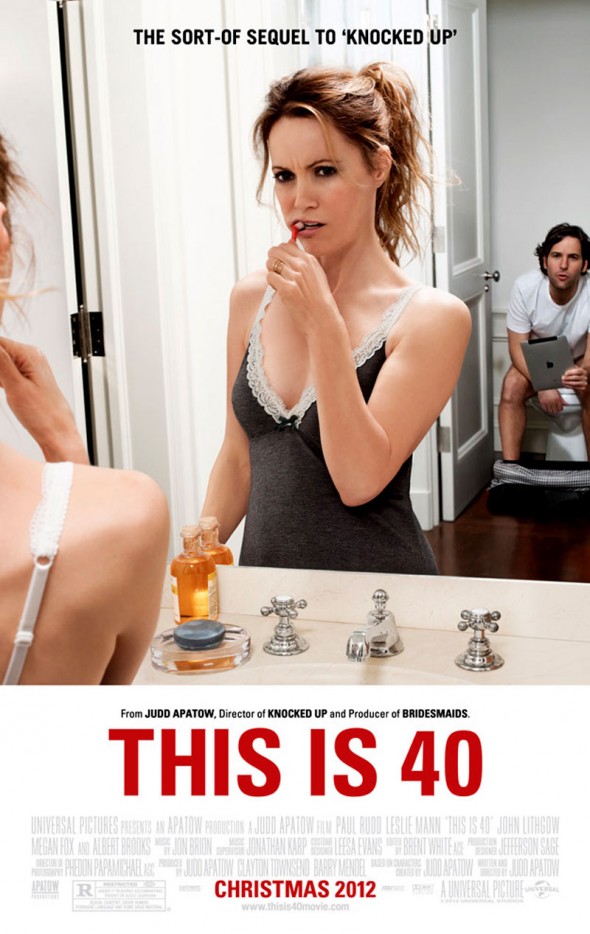 I’m not the audience for This Is 40. This â€œSort of Sequel to Knocked Upâ€ follows a pair of that film’s supporting cast, the unhappily married Pete (Paul Rudd, reprising his role as loveable everyman) and Debbie (Leslie Mann, reprising her performance from every other movie she’s ever been in where she plays an unlikeable bitch) as they face down middle-age and a myriad of personal failures. And to keep things light, they do this while trying find something worth living for in themselves and each other. If that sounds like a laugh riot to you, you are likely a sadist and should seek help.

I will say this: Some people will see themselves in this film and find a comforting mirror, and it provides enough easy laughs to make a child chuckle at times (were it not for the R-rating). For those of us in my age cohort, the 20s to early 30s-something demographic who made Apatow a household name in the Bush era, This Is 40 isnâ€™t the most appealing picture on the big screen at the moment. The film employs Apatow’s signature style, let’s call it “Socially Awkward Realism,” to good effect, and it definitely had its moments, but just as Apatow’s protagonists find themselves diminished by adulthood, his writing seems tired and forced in the glare of his earlier work. This is partially because of the plot’s plodding nature and the constant state of grief in the characters. Where earlier Apatow efforts have found humor in painful situations, This is 40 seems to mostly focus on pain instead of the kind of light-hardheartedness needed to give this cloud of monotony a bit of silver lining. This isnâ€™t helped by the 2 hour and 14 minute runtime either. This kind of length wouldnâ€™t have bothered me so much were it not more suitable for a story with more density, detail, integrity, and panache.

This is not to say that itâ€™s an unfunny movie. It’s funny in the same way that Apatow’s previous overlong, over-morbid magnum opus Funny People was funny. Like an arduous hike, parts of it were worthwhile and even revelatory, but I wouldnâ€™t want to endure it again. The feeling you get isn’t that of a borderline ribald comedy, but instead it seems more like a sometimes humorous, morbidly ironic relationship drama stretched over the rickety structure of a formulaic Hollywood comedy. This feeling of not knowing exactly what kind of movie This Is 40 wants to be plagued my enjoyment of it throughout. The lack of structure denies the audience any narrative closure, opting instead for soft, uncomfortable entropy.

What Apatow is attempting here is what all artists seek to do, find the universal in his own particular experience. At times it comes close, but it is so long, so grim, and so personal that it feels alienating. Even in its laugh-out-loud funny moments there is an overriding darkness that presides over the film, preventing its humor from ever truly taking flight. I definitely laughed plenty, but most of my chuckles were overpowered by the feeling of scenery collapsing around our heads and the numbing restrictions of a screenplay that would never leave well enough alone. This is 40 lacks the undercurrent of hope that runs through even the most awkward, uncomfortable moments of The 40 Year Old Virgin and Knocked Up. It left a bad taste in my mouth, and I hope I’m never able to relate to it.