As I sit here listening to Curtis Harding’s debut album “Soul Power,” yet again, and of course reveling in that vintage sound Burger Records has an ear for, I’m reminded of why I’m starting the next season of the Make Guthrie Weird Block Parties, located on 2nd Street Downtown Guthrie, with Valerie June. She’s on the same label as Stillwater’s Colourmusic: Memphis Industries, which is actually based out of England. The more you know, kids.

For those not paying attention on our social media, Valerie June plays the first Make Guthrie Weird Block Party of the season on Friday, May 30th. I kind of feel like a broken record as I’ve been making mention of this for awhile now, but it’s for good reason. Plus the feedback I got from our social media readers, who enjoyed her OKC concert at the Conservatory earlier this year was, more or less, “thank you for alerting us to the presence of this songstress!”

Honestly, this is an excellent, laid back opportunity for people who dig her style of music, which unlike Curtis Harding’s heavy R&B vibes that mix funky, psychedelic, surf-garage rock, gospel, and soul, Valerie June channels another kind of vintage sound by invoking the likes early Dolly Parton country, gospel, soul, roots, blues, R&B, and folk. But you can have a listen for yourself, and if you’re looking for a sultry, soulful, slow-burnin’ song; skip straight to “Pushing Against A Stone.”

Also know that one of her songs is inspired by the work she and her father did in their family’s labor intensive brick business in Tennessee, and that later her “making ends meet” experiences were informed by the working woman’s blues she did on her own. She’s potent stuff, and has some attitude if you’re paying attention to the lyrics. All that aside, the event organizers in Guthrie have picked up the tab on the performances, as John Moreland and Stranded At The Station also play that evening, so the entertainment is free. Food trucks, however, got a living to make.

A word of caution, you may fall in love with some charming things, and so you might want to budget some $$$ for that.Â  The shops up there have a Harry Potter/Gothic Western-Wes Anderson vibe. I dare you not to be tickled by a saucy, embroidered hanky or something else that is whimsical and oddly humorous.

Alright, I asked a few questions about what this year entails, because I’m convinced every organizer ever believes each year needs to be its own experience and somehow an improvement upon the last. And what would ya know, there are some surprises in store for this year. Christie Clifford, one of the two owners of Prairie Gothic, got back with me on the deets.

OKC.NET: Is there anything new or different about this year’s Make Guthrie Weird Block Party season?

Christie Clifford: Yes, there are some new and exciting events coming up. Even though we love the formula we had for last year’s party, as we believe the atmosphere and relaxed vibe was unbeatable – we haven’t heard of one unhappy attendee or local, still we would like to mix it up a little as not to become too predictable. We believe this is what will set us apart from other events in Oklahoma.

May through July will be pretty close to the previous parties, because we believe we’ve always brought some great talent and are even upping our game a little here. This is evidenced by the fact that two of our performers are nominees for Americana Music’s Emerging Artists of the Year. There’s Parker Millsap, who not only lives here, but has performed at a block party and one of our upstairs Winter parties, and now this week Valerie June, also nominated, will be here. As for August, I believe it will be the most different and still fun, we have the Cactus Blossoms already scheduled and some other yet-to-be revealed aspects, which are top secret until final agreements are made. But this event will be one that I think Oklahoma has never seen the likes of, so yes it will still be fun, but yet we’re mixing it up a little.

OKC.NET: What kinds of food trucks will there be?

Christie Clifford: We will try to have a variety of local trucks and include trucks from other areas. We always have Union Tacos, who have become a cult favorite. Brown Egg Bakery is always willing to bring some extra special treats, and we have the Bluebelle’s swinging doors, which are always open and ready to serve up some good old fashion fresh grub with twist, and many more.

OKC.NET: What is the typical season for the Make Guthrie Weird Block Parties, is it May to October?

Christie Clifford: Our typical season is May thru October for outdoor activities, but the old WPA building, along with our upstairs living room, have lots of room for indoor music as well, therefore this extends our season year round.

OKC.NET: How is the event organized, who are the sponsors, if any?

Christie Clifford: Organization of a typical event usually starts here at Prairie Gothic, with Shirley and myself, brainstorming and listening to lots of new talented artists. After preliminary plans are made, we get together with Hancock Creative’s team, which is the whole family, and they always come up with the best, good old-fashioned kid’s activities. Then folks will come to us with products and or things they’d like to contribute and we love to include everyone, especially if they seem like a good fit.

As for sponsors, they’ve so far been as rare as hen’s teeth, so for the most part Prairie Gothic has paid the way. This year our second party, on June 7, is being sponsored by local businessman James Long, in honor of his and his friends’ birthdays and we’ve switched locations to the block near his business for that one, it’s at Oklahoma and Wentz. We are pretty darned sure though after sponsors see the turn out for these first two events, they will be on board and kicking themselves for missing opportunities that were missed.

OKC.NET: What’s something I haven’t asked, that you think is important to know about the Make Guthrie Weird Block Parties?

Christie Clifford: For families, I mentioned earlier Hancock Creative plans kid activities and James Long has generously provided the bouncy house. The party on Oklahoma will have two big inflatable kid’s toys too.

It seems like we’ve covered a lot, but I guess as far as the musicians go, and don’t get us wrong, we love our Oklahoma musicians and sprinkle them in liberally with each event, as you can see by our lineups, but I believe that we go the extra mile and extra dollar to bring what have so far been some superb music to central Oklahoma.

And not to sound snobby, because we really aren’t, we don’t work from a list of people who are offering their acts to get any exposure, and sometimes practice, that they can. We are seeking out artists to enhance Oklahoma’s music scene and so far have brought it to them FREE! As I’ve been typing this, I had to answer the phone once again for people wanting tickets to see Valerie June, and once again I had to tell them no tickets, but if they bring a lawn chair and sit back and relax they can enjoy some outstanding music for free!

We’ve been working under the assumption that if Guthrie showcased itself and what we have to offer, that people would not only want to visit, but maybe even stay. And that’s good for our community and our businesses. We’re just trying to do our part. Hopefully we are right and these events will be the ones that bring sponsors flocking to our doors, if not we will continue to pound the pavement, write the emails, and fill out the request forms until we find the sponsor that can see our vision for our little corner of America.

You can follow the updates on Make Guthrie Weird here or on Prairie Gothic’s social media. Add the event to your Facebook event calendar here. 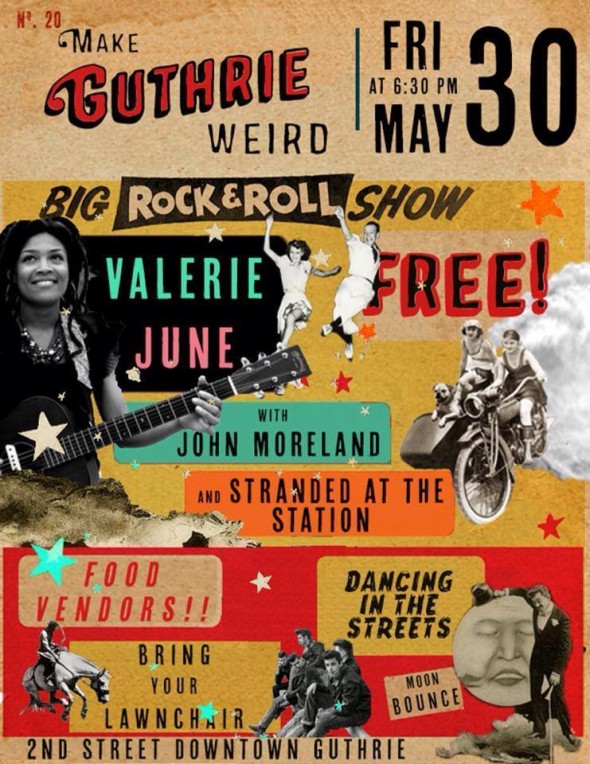