“The Road to Weird.” Photo by Brandon Isaak

I’m not from Oklahoma so Guthrie is fairly new to me. I’d heard rumblings of the place back when I’d been told of an annual yarn and fiber arts fair and perhaps there were a few murmurs of its burgeoning arts scene at last year’s Oklahoma State Arts Conference too. But until recently, teacups, lace doilies, and knitting seemed to be my only frame of reference for this place.

Ok, and maybe I did conjure up the image of cowboys and boots too. Dorwart Boot Shop. Photo by Brandon Isaak. If you love boots and can afford an old school pair, this is your place. He makes them by hand with antique machines. Be prepared to part with your money, because these custom boots can go for thousands of dollars.

Enter this Mumford and Sons “Gentleman of the Road Stopover” business. Given the number of people that really enjoy Mumford and Sons, and other popular acts on that line up, there was a high statistical probability that I would be roped into purchasing a ticket to this shindig. Alright, if we’re going to talk about some weirdness, folksy Americana is not the music genre I turn to as much as dream pop and psychedelic rock. Also funk, freak folk, and experimental electronica/hip hop/jazz would be other genres I would explore before ever stepping into the waving fields of good old “Americana.”

Despite months of contemplating ways to sell my ticket, which would have included finding someone who wanted to go with my Sister-in-Law or her finding someone who wanted to pay over $100 a ticket and camp out in the middle of nowhere for a weekend, I figured there was bound to be something else I could enjoy in this town too. And recent news out of Guthrie bolstered the odds of finding a few things that were unique and weird about the place .

Anyone trying to revitalize their economic prospects through the arts is going to recognize the need to build a community that lets a certain flair for “uniqueness” flourish. For that, you’re gonna need some weirdness.

Not one to shy away from getting to “know” a place just because I never had a deep burning desire to be there, I decided to pay a couple of visits to Guthrie before at attempting to navigate through the zombie-mob-crowds sure to be seen Sept 6-7th. This is when thousands of people looking for a weekend of camping, music, and general purpose fun will be milling around, thereby tripling the population of Guthrie overnight.

Here’s the thing about Guthrie I discovered on the first trip: I was truly surprised! I knew there were Victorian era buildings, but I had no idea how many of them there were and how unique each of them are. In an age of sprawling strip malls and such, one kind of wonders what’s happened to all the architectural quirk.

Prior to my first trip, co-Editor Colin Newman described the place as a “Victorian city trapped in amber.” He was not wrong. For those of us who never had a mandatory Oklahoma history class, turns out Guthrie was the territorial Capitol until Oklahoma City became the official state Capitol.

There’s also a network of underground tunnels (not that we had time to get all subterranean), and a crazy-ornate Masonic Temple, which is ranked as one of the top 3 in the nation (#neverfailstomakemethinkofNationalTreasure ).

If the stopover thing is a hit, Guthrie city officials should find a way to contractually harness the combined powers of Nick Cage and Disney to make a movie here, as a tale of lost treasure findin’ pops to mind as a plot device. Why? Because Tom Cruise and Nicole Kidman already did an Oklahoma landrush story.Â  And another Tom Cruise movie, “Rain Man,” also has ties to Guthrie. (Thanks Wikipedia!) For what it is worth, the city has been designated a National Historic Landmark on account of all the pretty, untouched buildings. I’m sure someone with a talented imagination could dream up a hidden treasure/conspiracy scenario about this place. Skeletal articulation “Family of the Future” by Brian Magby is located at Hancock Creative Shop at 116 S. 2nd St., Guthrie. Yes, the fallout shelter family plays and dances happily oblivious of the rat-eat-rat world outside. Photo by Brandon Isaak.

Anyway, I missed the first Make Guthrie Weird Block Party, which was held in July, but my friends the Magbys went and liked it, so they suggested going to the second one in August. Brian has art work at Hancock Creative Shop, but he mentioned that we should check out Prairie Gothic next door too. It had been closed on the first trip, but was open for business that evening. Both shops carry curiosities of a sort, yet they vary up their offerings. In Oklahoma it is so much smarter to let the wind do all the work. Also these children are using bubble wands provided by Hancock Creative Shop. Of note: this requires some skill, not everyone who attempted this activity could consistently produce large bubbles.Â  The trick is to catch the wind and flick the wands open at just the right time.Â  Photo by Brandon Isaak.

Hancock is for creatives looking to find supplies, art books, or whimsical notions. There are other types of nicknacks for shoppers too, like jewelery, art, and cards. Still Hancock feels a little like walking into the Harry Potter-verse, from the book podium/cash register to the large Victorian windows covered with butterflies to the technique-proficient few who can successfully use wooden bubble wands. This would clearly be a shop in Diagon Alley. Doesn’t it just look so Muggle-born friendly? The laptop clearly says, “And we’re not afraid to reach into the tech world either!” Photo by Brandon Isaak.

On the other hand, Prairie Gothic appears to cater more to those looking for home furnishings, jewelry, clothing, accessories, and other decorative curios. Plus this shop has more of a charmingly anachronistic Midwestern vibe, although there are certainly a few elements of the macabre scattered throughout the shop. I could see a Wes Anderson lover (think “Fantastic Mr. Fox,” “Moonrise Kingdom,” or “Darjeeling Limited”) totally feeling at home in here.

Also check for adorable cross-stitch hankies and such. It’s hard not to walk away with something.Â  I discovered they carry my favorite kind of incense bricks too. So I ended up up with a box of juniper, although given the sheer variety of “Scents of the Southwest” they have, this is now my local stash for the stuff. Next time I’m there, I’m on the hunt for a box of fir! 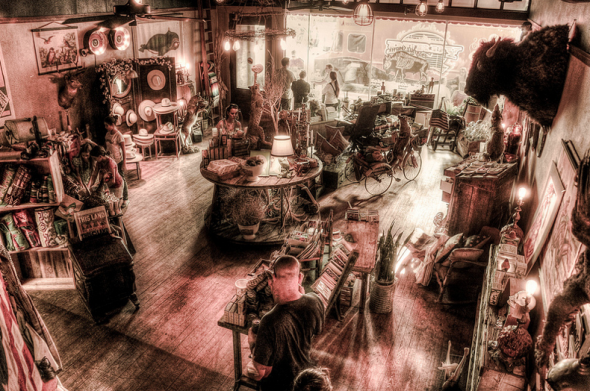 At any rate, as we wandered the block party and the nearby area, I was again surprised by the turn out and the kinds of people who call Guthrie home, from the rockabilly waiter at the newly reopened Blue Belle Saloon, (the co-owners also run OKC’s Iguana Grill and Sara Sara Cupcakes), to the folks in the crowd participating in an impromptu sing-along with Samantha Crain that night. It was the kind of crowd you’d find at the monthly OKC H&8th Night Market or any of the metro area art walks. Guthrie feels like it has the ingredients to be one of those special quirky western towns where weirdo art colony, history tourism, and smalltown folksy goodness meet. (Think Bisbee, Arizona or Georgetown, Colorado or Marfa, Texas)

I also want to refute a rumor I heard at a concert recently; Guthrie doesn’t actually have a huge meth problem. The good news, depending on how you look at it, is that Guthrie is slightly higher than Norman but slightly lower than Stillwater for known addresses that have housed meth labs, at least according to justice.gov. Honestly, numbers wise, meth is a far more scary problem in OKC and Tulsa. You don’t need to cook meth to be weird, kids. You could just learn a new tune. It’s so fun too! Just look at Samantha Crain and Kierston White teaching the audience lyrics and cues. Photo by Brandon Isaak.

As I mentioned, there’s still more to this place that I haven’t seen yet, like Hoboken Coffee Shop, which I hear good things about, a new slightly more macabre curio shop that had just opened that evening called Owl, and the place where the Stopover is being held. Who only knows what the stage configuration is going to look like, or where the tents are supposed to go, but right now you can plan on this (see picture below), but imagine it with like 100% more people, tents, stages, and music. 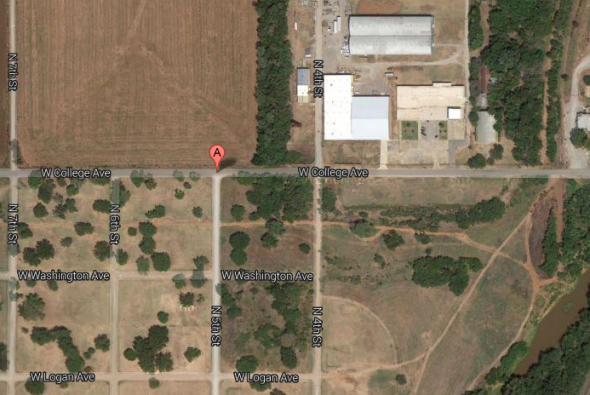 And over yonder there’s a creek! Image credit: Google Maps.

Given the number of tickets sold, 25K at last count, this place is going to be a hotbed of activity come early September. So if you really wanted to snap photos or walk around without record breaking numbers of people all up in your biz, potentially photo bombing your precious moments, then you should check it out and really “get a lay of the land” as they say.

If you want to see more of our visit to the “2nd Make Guthrie Weird Block Party,” check this Flickr pool. All photos by Brandon Isaak.

4 comments to “Travel: On the Road to Find Guthrie’s Weird”