My husband has been trying to talk me into moving either to Norman or Guthrie for months. And after Friday night’s Make Guthrie Weird Block Party, I have to confess I can see the romantic appeal of living around all those old brick buildings. Throw in some good music, the moonshine, plus downtown all lit up and: swoon. 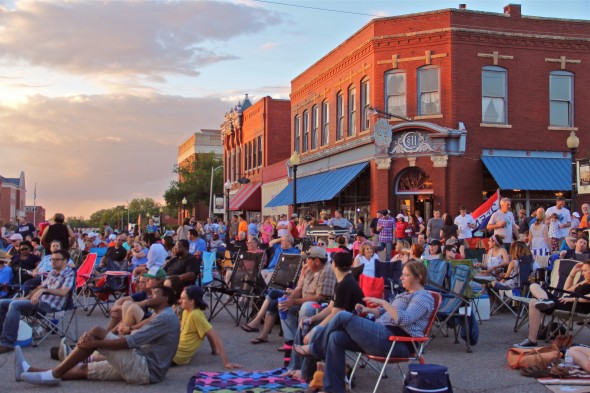 Scene of the crowd gathering at sunset at the first Make Guthrie Weird Block Party of the 2014 season.

So how was the ambiance that weekend?Â  It was wonderfully laid back and chill. The weather was perfect. I walked around and took some photos of oddities that caught my eye or just fun things in general, met up with friends, made new ones, and enjoyed the evenings festivities.Â  You can check out other photos from this evening on our online photo albums at: 365 Things to do in OKC or OKC.NET. 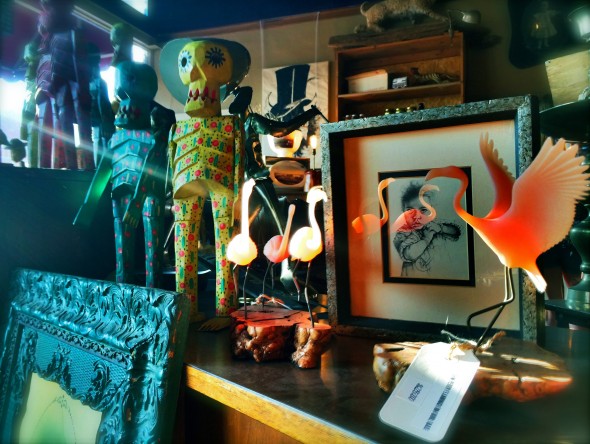 Flamingos decor and other whimsically retro and/or folk items at Prairie Gothic.

At any rate, it’s been almost a year since I interviewed Valerie June at the Austin City Limits Music Festival.Â  And much has happened in that time. June toured with Sharon Jones and the Dap Kings, and then again with her band and herself all throughout the Midwest during some downtime from that initial tour. She also recently taped an episode of Austin City Limits, which you can watch on October 11th when it debuts.

Naturally I scheduled an interview to play catch up and find out what she’s been up to during this time – and also marvel at the fact I didn’t have to drive very far to see her perform once again.

OKC.NET: You were in Austin recording this past week for Austin City Limits, how did it go?

June:Â  It was a dream come true. I love Letterman, I love Leno, I’m glad I got to do that. Leno was my grandmother’s dream, and Letterman – my whole family was super excited and all my friends – but with Austin City Limits, girl, I have dreamed ever since I saw Tracy Chapman, years and years ago, I have dreamed of doing it. And I saw Mavis [Staples] do it, and I wanted to do it so bad. And then I saw Bonnie Raitt do it. And I was like, “One day. One day I’m going to be on that stage.”

Because to me, what means for American music and Roots music, it’s like….”

OKC.NET: “Being a part of the Grand Ole Opry back in the day?”

June: Yes! Yes it is. It’s just nice to be a part of a collective of musicians who preformed there. I was honored. I felt like a kid, like “Yay! My dream’s come true!”

OKC.NET: It seems you’ve been on a trajectory, since we spoke at Austin City Limits Festival to begin with, and then touring with Sharon Jones and the Dap Kings, and opening for her before she recorded an Austin City Limits episode, is that how did you ended up on the program?

June: I think they had watched me at the ACL Festival, and were like “I don’t know, is ready she do it?” And then they watched me again opening for Sharon, and they were like “Yes. We can do it.” 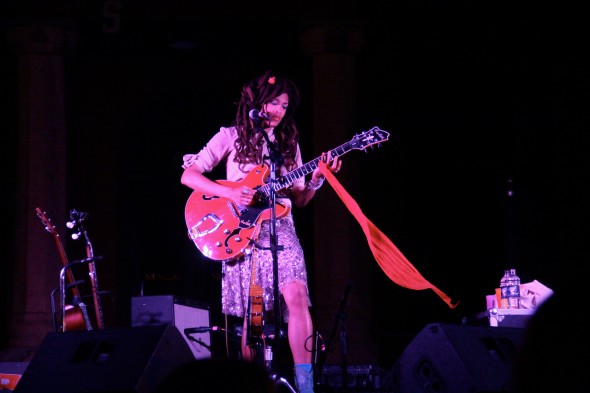 You should know her slide is a little too big for her finger, so that scarf is as much as for show as it is for genuine usefulness.

OKC.NET: Awesome. Ok, jumping onto a new train of thought, what kind of visual art appeals to you lately?

June: Well, I just sold four paintings at my show at Stubbs. I’ve been making these very small paintings.

June: I haven’t put any on there, but I have some on Facebook from my art show that I had last year. I’ve been working on paintings that are easy to travel with, they make these tiny canvases now that you can run into a Michaels or Hobby Lobby, or wherever, and pick up. And some were small portrait-sized and some were bigger, like the size of a table napkin. But they’re very thick canvases. So I sold four of those at Stubbs, and it was very fun. My art is very whimsical. Magical. Playful. Folk art. The subject of it is very natural. 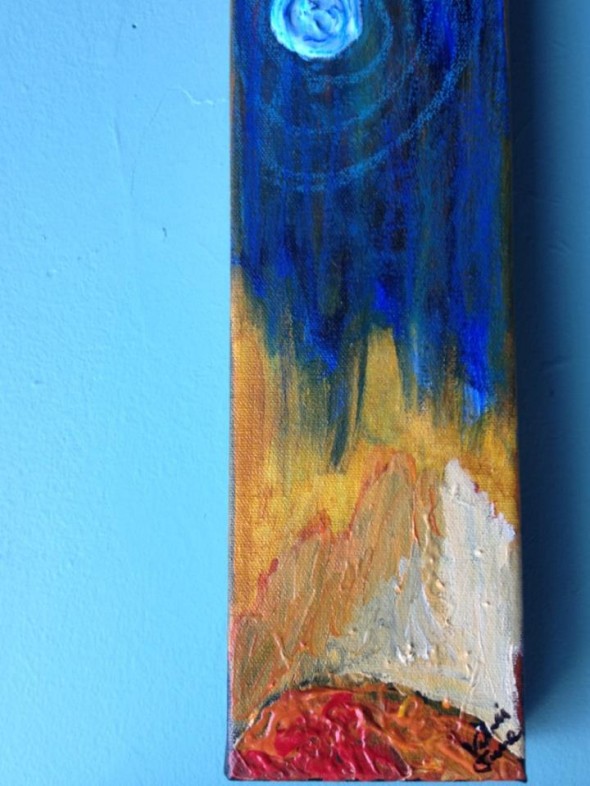 OKC.NET:Â  What song can’t you get out of your head right now?

OKC.NET: What’s the best food you have lately, on the road or in Oklahoma, like the kind of a place you’d recommend to fellow travelers?

June:Â You should go to a place called Smoke in Dallas. The food was amazing. They’re known for smoked meats, and so that, and they also had some very healthy things like salads and fresh seafood. But they had sausages, hams, and smoked meats, it’s very good.

OKC.NET: Any books you’ve picked up lately? I mean you’re on tour, you’ve got to be reading.

June: Yeah, a lot of e-mails. (Laughs) There is a beautiful, beautiful, B-E-A-U-T-I-F-U-L book, you must read it, and you can read it a day or day and half at most, it’s called Manuscripts Found in Accra and it’s by my favorite author Paulo Coelho. It’s about love, it’s about life, and there’s another book I enjoy called I Am the Door. And it’s like that. It’s like a prophet being asked by people all these questions about life, like how would you deal with work, or working too hard and complications with love or relationships, like how would deal with a husband or a wife, and the prophet returns with beautiful answers to the questions people have. 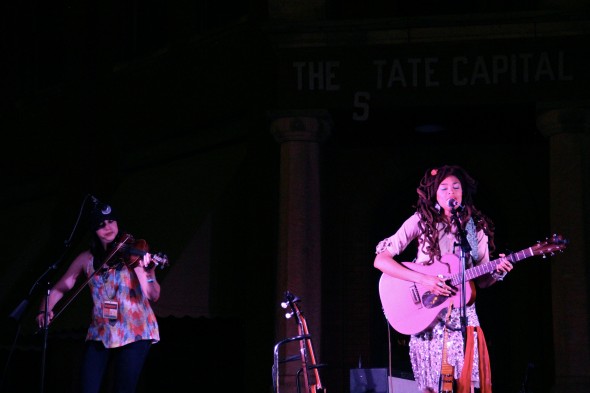 Amanda Fortney from Stranded at the Station provided some back up violin for June, who for the most part played by herself. She had a story for each instrument, and worked in stories about music, the moon, and the blues (think stories about Robert Johnson)Â  into her set. She’s a storyteller.

OKC.NET: What’s been your favorite show this year? Which I should have asked you first, because I’m betting it was Austin City Limits.

June: It was. And now I’m gonna cry. It just meant so much to me.

OKC.NET: So at the top of the list of high points?

June: Yes. I don’t really have high points. It’s the journey for me, so to have one finally, and now I’m just like “What do I do?” 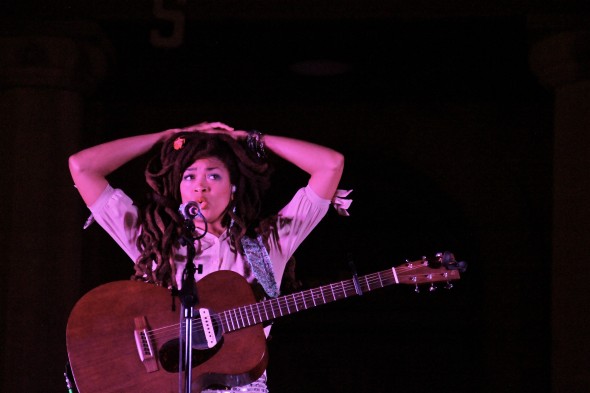 Two things. First: if you ever have an opportunity to see Valerie June and speak with her after a concert, as many in Guthrie did that night, you’ll notice she puts her hands on her head a lot, which is really endearing in person. Second: those two roses in her hair came from a little girl in the front row during her sound check. That’s right, she wore them from sound check, through a wardrobe change, and for the rest of the night.

OKC.NET: Are you a songs kind of person? I keep a Spotify list for “Songs from 2014,” I mean I have albums I have really liked, but individual songs resonate for me, is it that way for you too?

June: Yeah, the song I’m hearing lately is Leavin’ On Your Mind by Patsy Cline. And her voice just kills me. The woman can sing. Her voice is so powerful. 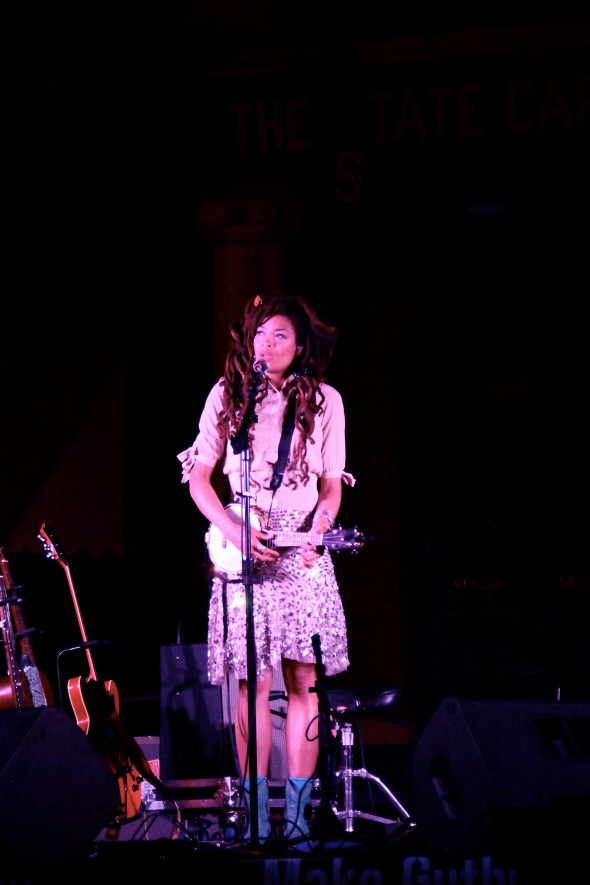 June was center stage belting out songs with the “Baby”.Â  The “Baby” also has a “Mother” and there’s also the “Stranger” in the mix. She also sang an a capella song with a tambourine when the power got funky for a second or two.

Want to keep up-to-date with Valerie June or Prairie Gothic/Make Guthrie Weird, then follow those links to their Facebook pages.

Here’s the skinny on the next event in Guthrie: Saturday June 7th located at Wentz and Oklahoma in downtown Guthrie. It’s another block party bash featuring the music of Jamestown Revival, Wind and the Wave, and Kris Orlowski. 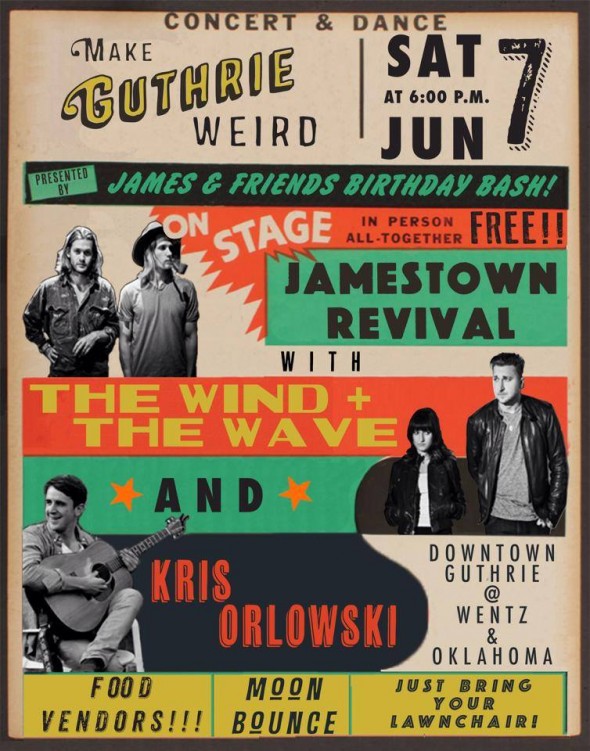