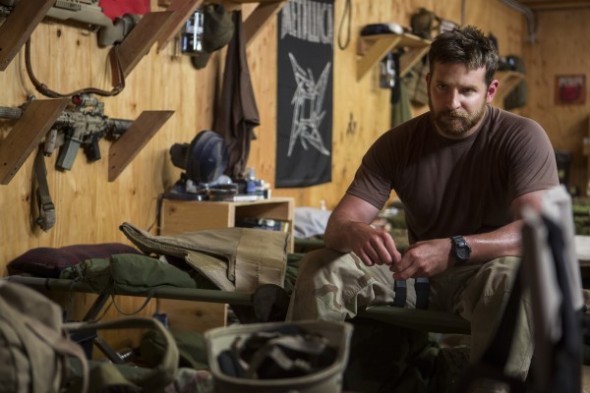 People have different theories on acting and different ideas about what great acting is. Perhaps at its simplest acting is when a personality we are brainwashed to regard as a celebrity slips into someone weâ€™ve actually known before, but donâ€™t know yet. Such was the startling way I felt when Bradley Cooper (Oscar nominated)Â as Navy Seal sniper Chris Kyle is home from a tour of duty, getting his car fixed with his son. The child didnâ€™t get the 50Â centÂ toy he wanted and Kyle is telling him, â€˜thatâ€™s not how this machine works.â€™ A star-struck soldier approaches Kyle to tell him he saved his life. He delivers a rhapsody to the kid too. The awe-inspired looks follow Kyle around his four tours of service in Iraq where his comrades donâ€™t waste time dubbing him The Legend (with 160 sniper kills to his name). He tries to ward each compliment off like a curse. â€œYeah well, Marines saved our ass plenty of times,â€ Kyle tells the younger man.

Growing up in Oklahoma, near Kyleâ€™s Texas, one knows the kind of tobacco lipped person who takes little pleasure in talking and sticks to the task at hand. As he acquires a record of some sort his peers feel compelled to follow him. He doesnâ€™t create drama, but tries to settle it should it arrive. Â Cooper, a kind of weird actor, now 30 pounds of muscle heavier, inspires our confidence as we watch him talk to his son about the toys heâ€™s not going to get. And also of course when he prevents American Humvees from being blown up by rocket wielding men, and (excruciatingly) women and children.

Something in Cooperâ€™s seriousness about acting, which began full force when he turned 30 and got sober, is reflected in Chris Kyle as a 20-something sub par rodeo competitor who looks at his buddy and a table of empty beer bottles and says heâ€™s not living the dream at all. He dimlyÂ perceives some other purpose out there. His answer is to join the Seals. He loves his country. His dad taught him there was good and evil and that the weak (sheep) needed to be protected by the strong (sheep dogs). This would make Middle Eastern insurgents â€œthe wolves.â€ In Eastwood’s telling many soldiers are not as competent as Kyle,Â with even superiors whoÂ want to lob duties off “on the contractors.” Still though,Â Kyle believes he lives in the greatest country on earth. In the acts of his service he saves countless lives. Heâ€™s a killer, but one who has done it to buy our comforts. Â As an actor, to be able to present to the worldÂ that man’s actions and his inner struggles is an astonishing job to do.

This may not be the exact Chris Kyle, the boastful man who challenged Jesse Ventura in his memoir, but in the considerable action in American Sniper, my guess is Cooper and his director Clint Eastwood got it right, right enough to make a great film. They also nail the mysterious qualities of a gifted warrior. We see in training that Kyle has an eye when he disobeys instructionsÂ and insteadÂ shoots a hiddenÂ rattlesnake, proving he can scan the perimeter too. What the American military has done with Kyleâ€™s eye and his passion for protecting his brothers is for the solitary viewer to figure out for themselves. No political party owns a man as substantial as a Chris Kyle, or a movie as haunting and resonant as Eastwoodâ€™s.

We are in safe Hollywood hands here. Eastwood no less than threads superb battle scenes with a classsic Western showdown, the American sniper vs. the sniper Mustafa (who we see in photos was a celebrated Olympic athlete too). They hunt each other. Kyle searches torn family apartments where the American can hardly tell toÂ whom the townspeople are loyal. When they talk to the Americans, Mustafaâ€™s friends makes a family pay with rifles and a drill to the child. At oneÂ pointÂ at a staff meeting the officers appeared tired, while Kyle stands in the back, shadowed, pathologically charged up asking, “ThatÂ Mustafa?”Â In our screening there were cheers when this costlyÂ vendetta was eventually settled (the decision to present American Sniper as an iMax experience tooÂ might encourage this kind of reaction). I was on seatâ€™s edge at a dust storm that blind evacuating troops and endâ€™s the fourth tour. It really is awe inspiring what some of these soldier’s have done.

So why does it haunt? For one, most of the recent films of Eastwood, Â Hereafter, J. Edgar, Jersey Boys and American Sniper occur at a rather quick and different pace of storytelling, their quality seems spectralÂ and predestined. Hereafter directly concerns the search for an afterlife or a common spirit in this one. But J. Edgar, Jersey Boys and Sniper more or less present an experience of a man, uncommon, but a man who is hurled through an unforgiving life. Eastwood films the punch, a horrible thing happening to the man, the singer Frankie ValliÂ loses a child, or when the soldier loses yet another comrade, and then Eastwoodâ€™s camera moves in for the kill, closing in on the witnessâ€™s anguished face. Â Each time Kyle loses a colleague or has a dilemma at the rifle we move in on Cooperâ€™s face. Sometimes this decision even has a comic effect– reflecting, one supposes, the absurdity of all the things man is up against.

In one juxtaposition of sound and image Kyle is home while his wife (a terrific Sienna Miller) is throwing a BBQ in the back. Camera and the house dog rush past a still and sad Bradley Cooper as the audio plays the helicopter sounds in his head. Kind of an odd image, but devastating. All of life merges together in the man, and despite even a strongÂ one’s stoicism, these destructive life forces eventually converge in body, mind, and soul.

The only thing that can restore the warriorâ€™sÂ peace is a reunification with his army brothers. This is done through the VA, where Kyle at the advice of a psychiatrist volunteers to talk to disfigured vets. To those who know the Kyle story, his attempt to quiet any chaosÂ by helping othersÂ only results in trouble. A mental health epidemic is ravaging the new breed of soldier. Clues were placed in Kyleâ€™s path, of men losing it. His brother looked him in the eye and said â€œfuck this place,â€ to Kyleâ€™s duty-boundÂ obliviousness. As a leader he couldnâ€™t allow himself to see it. 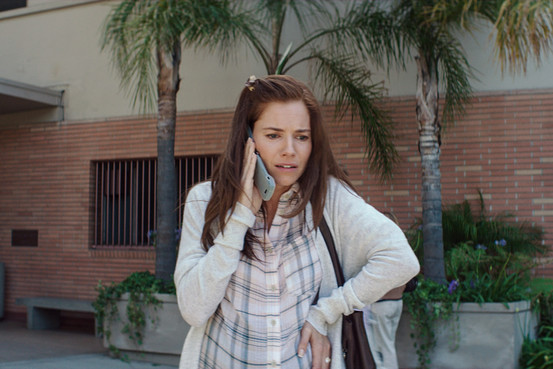 The last person to see the glitch, the sickness sneaking its way into society, is his wife who guesses something might be wrong. Â The viewer is shaken because of whatÂ weâ€™ve seen, the survivalÂ in war.Â Â We go back to our memory of the ghostly lit film and back again in search of a different ending, one less abrupt and senseless. We couldâ€™ve known more about Kyle, or he about himself. Eastwood ends the tragedy with a look from the wife: perceptive and loving, knowing and unreturned.