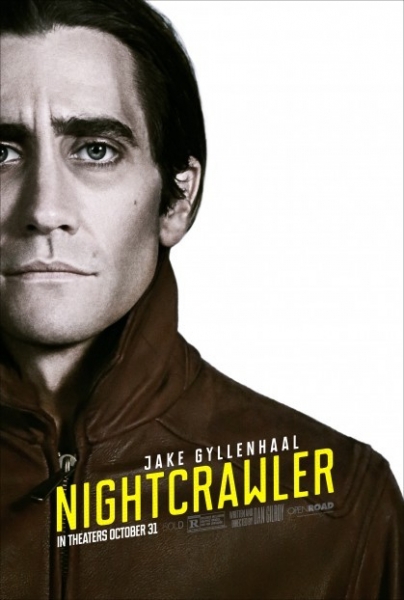 This week the movie Nightcrawler surprised award-watchers when it snagged a Producerâ€™s Guild nomination, Writerâ€™s Guild, and a Directorâ€™s Guild nod for first-time director Dan Gilroy–at the DGAs edging out Boyhoodâ€™s Richard Linklater. While the decision to snub Boyhoodâ€™s achievement is suspect at best, the Nightcrawler love looks like a needed vote of confidence for low budget and adventurous art house movies–as opposed to calculated winter prestige films. Â Nightcrawler has the marks of a smart movie that was sneaky and fun to make. It gives its lead actor cart blanche to go all-out with his creepy character; it switches between digital and film stock according to former There Will Be Blood DP Robert Elswitâ€™s moment-to-moment vibrations; it casts a beer-bellied Bill Paxton in a subtle nod to the filmâ€™s VHS patina of 80â€™s cheese.

Beyond the cinematic qualities to admire, all articulated in this review, Nightcrawler makes sharp critiques of news media practices and the uniquely craven pursuit (and need) of commodities in American society, points that sting all the more in their normality. The film lays out the conditions of The Nightcrawlerâ€™s life of creepy survival, zeroing in on freshly dead bodies, then collecting cash for filming them. The story glides in such an efficient way because the anti-hero sloughs off the moral judgement of his vampiric actions and the movie never loses its momentum as an excellent thriller, with car chases and suspenseful shoot outs.

The anti-hero, Lou Bloom, begins his night search by stealing scrap copper wire and unsuccessfully attempting to sell it to a man who â€œdoesnâ€™t buy from thieves.â€ Slowing down at a car crash on the highway he meets his first nightcrawler, Joe Loder (Bill Paxton). In Internet-cold speak he extracts all the information from Joe about his business. He films gruesome events and sells it to local news stations as a freelancer: â€œif it bleeds it leads.â€ Lou assumes a ridiculously respectful posture and says â€œthank you for taking the time to discuss what you doâ€ to a very puzzled Paxton.

At a diner soon after he interviews a well meaning hobo who has no idea what heâ€™s interviewing for and wants to know what he will get paid. Lou Bloom responds that this is an opportunity to get in on a growing business. He can offer him, alas, an internship. Later the hobo is appointed Executive Vice President–looking just as confused to be there.

Lou leaves his lonely apartment to film, avidly. He preaches to anyone who will listen (his driver) the virtues of hard work and wealth acquisition. He gets a better car. Gyllenhaalâ€™s deep set eyes become possessed with a hunger. He sells the films to a night shift news director named Nina (Rene Russo) Â who needs them; Â perfect footage for her is described as â€œa screaming woman, running down the street, with her throat cut.â€ 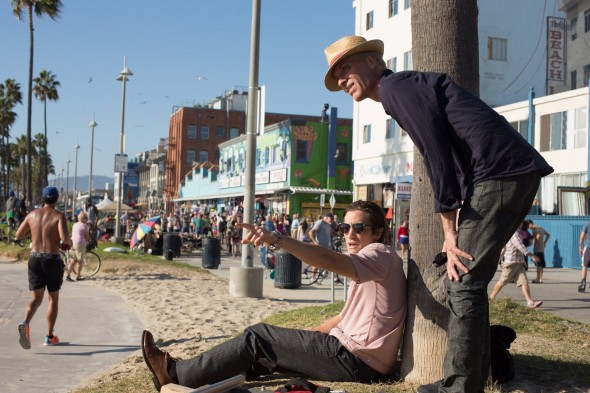 The film is about survival in our new era of uber capitalism that director Dan Gilroy likens to a jungle. Â Jake Gyllenhaal approached his director, looking significantly thinner, and said that the Lou Bloom character was a coyote. An animal that is always hungry, and comes down from the hills at night to feed. The actorâ€™s walk and way of entering a virgin crime scene adjusts to this coyote as well.

Two truths of capitalism animate the underground energies of this movie brighter than the yellow lights of Gilroyâ€™s Los Angeles.

Lou Bloom walks onto the stage of the news studio after making his beginning transactions. The bright backdrop of the city enchants the nerd and he meets a woman he could love, the aging newswoman of the lowest rated show in LA. Silly music is keyed up and the movie becomes a tonal jumble. But this cupidâ€™s moment is eviscerated when Lou takes her to the Mexican restaurant he’s read about. There his inner coyote goes in for the kill and he lays out for his date why she needs him and her job is in jeopardy. Rene Russoâ€™s vibe is all poker face, with a hint of want, just a hint, of wanting to be desired by this guy, no matter how weird he is. When he presents his transaction: Iâ€™ll give you my footage for sexual companionship: she gets pissed. But she succumbs to the truths of the marketplace and agrees to keep seeing him. Their interactions get testier. But, the magic can be renewed. Â In an inspired moment of the final act Lou and Nina lock into an erotic stare down while he plays her the newest tape, a shoot-out Lou expertlyÂ stalked caught on camera. His partner, the Executive Vice President, is shot andÂ Lou’s footageÂ scampersÂ upÂ closer to theÂ dying body. Wasnâ€™t this dangerous,Â she wonders? And then the warm eros in Nina deepens toward and for Lou as the shot stays on them. 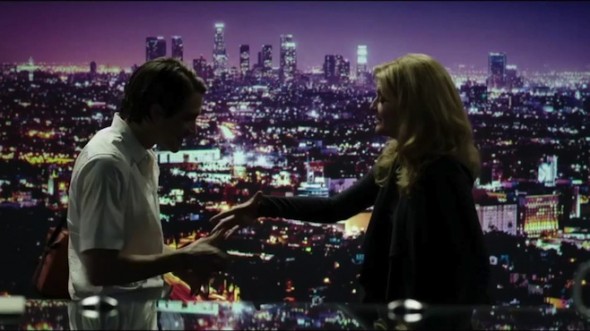 2.Â  As summed up in NormanÂ Mailerâ€™s Advertisements for Myself, â€¦ Â Profit must come from loss. The lost energy of one human being pays for the comfort of another.

The corporation cannot anymoreÂ wholly exploitÂ working people at their jobs, but at their homesÂ through their leisure time. The stations make sure as many people spend their leisure time watching local news before the household can gather at the table, read, surf the Internet, Instagram, send a mean tweet to a celebrity,Â search YouTube, play charades, or go watch the sunset. As known by everyone in the Nightcrawler newsroom, stress is high to get more viewers, becauseÂ people have more options and are pickier. The stakesÂ are high because we really value ourÂ own spaces.Â Â A tired man at home will pay extra at WalMart for something easier to cook if it buys him more precious free time.

Local news programs get their home audienceâ€™s attention by appealing to their sense of security. The station gets their money, to the extent they can, from keeping viewersÂ scared and inside their homes, in particular white suburbanites. Nina tells Lou specifically the best kind of victim to film, â€œwhite, well off, from a pleasant neighborhood.â€ Lou films a drug deal that ends in murder, but when the news plays the footage of the bodies in the niceÂ house it is framed as a breaking and entering. The news station likes urban crime seeping into the suburbs. This produces fear and compulsive viewing for middle class and upper class people, and also a fear of the minorites thatÂ are snap-shotted regularly on local newscasts. One always notices a black face on the screen of these broadcasts. (In a trickster piece of casting, when the FBI starts investigating Lou Bloom, it is a black woman agent).

Whatâ€™s more, in an economy that stretches from the proletariat, to the entrepreneur and now to the mass media and Internet, the domination of ordinary peopleâ€™s leisure timeÂ concerns mass media coverage, and the stability of the economy rests on what Mailer calls â€œthe psychic character of leisure timeâ€ where there is a â€œcreation in the consumer of such wants and emotions as the desire of excessive security.â€

WithÂ the viewerÂ desiring security, television presentsÂ him alsoÂ with “empty words, false detail and imperfect perception of reality” (i.e. the equation that all crime is urban) that when added up make more thoughtful viewers “skeptical, apathetic, sad, psychotic, or violent.” The sin of the broadcast news cast isÂ that in their endlessÂ coverage of murder, rape, infant deaths,Â car wrecks, the viewer is never given the psychic reliefÂ of redemption in the narrative. Just the crime, and a culprit lurking out there in the streets. Mailer claims, in his trademark dramatic fashion,Â that the mass media plays an important andÂ sustainingÂ role in the 21st century economy, but may destroy the mind of civilized man. 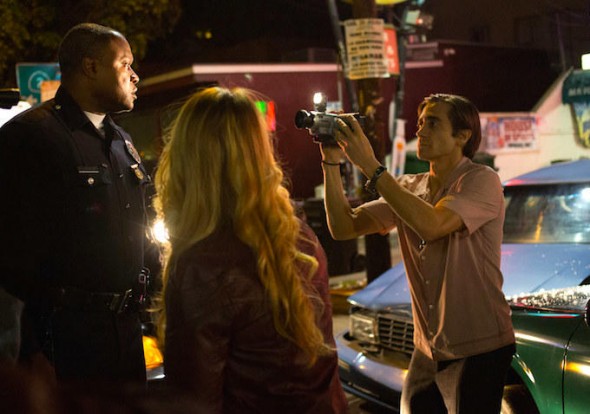 But on the other hand, the newsroom setting in Nightcrawler is filmed as a dark and claustrophobic one, kind of shoddy. The news generators themselves are nervous, grim, andÂ taciturn in our new century because they are losing viewersÂ to individualized programing. A new viewership turns to Instagram, Twitter or their web browsers at their own leisure, making it harder for the corporation, Marxâ€™s â€œMonopoly,â€ to keep track, acquire that extra buck from man’s leisure time. Lou Bloom lays this out in so many words to Nina, thusÂ establishing the rarity and import of the work he does.

Nightcrawlers are a real phenomenon in major cities, but mainly Los Angeles, Dan Gilroy tells indiewire.com. The city news stations let their union crews leave at 10 PM so they donâ€™t have to pay overtime. With a gap in coverage for overnight crimes, these freelancers take to the streets to collect footage. The size of LA and number of crimes keep a thriving market of nightcrawlers afloatÂ and there is still a large part of the population that watches TV.

Nightcrawler is on odd, not preachy film though. And while its satire is ice cold, it mostly reaches comic and strange moments by working from a hidden reservoir of empathy. One of Dan Gilroyâ€™s main motivations in writing the screenplay was a sympathy for younger people. Along those lines the viewer remembers that Jake Gyllenhaal is still a Â young, engaging man to watch. Scenes of Lou Bloom watering his plant by himself and early eruptions of violence suggest he has had a life of struggle and abandonment, where he now finds himself in an economic environment quite hostile to his survival and certainlyÂ violent to hisÂ emotional well-being. Â He studies feverishly and comprehensively the success stories of CEO lore in order to believe in something. His case has tipped over into pathology and a kind of evil. But the building of a personal belief system is important to his whole generation of nightcrawlers and daycrawlers who have been given the Internet with all its infinite amounts of information, and no jobs where they can use it.

â€œIâ€™m very aware that there are tens of millions of young people around the world who are facing bleak employment prospects,â€ Dan Gilroy says. â€œItaly has 45 percent unemployment under 30– itâ€™s insane. So [I was exploring] the idea of a desperate younger person looking for work.â€

To be sure, Gilroy only writes about what he knows, and doesnâ€™t recommend another form of economy. Nightcrawler presents a kind of worst case scenario given the ingredients already in place in the current capitalist system. Or best case, theÂ tale is basically a business success story.

â€œIf you only had [one] direction to climb, which is up, then to have a goal would give sanityâ€ he says of Lou Bloom. â€œI imagine he started to scour the Internet for self-help maxims and aphorisms, and Forbes 500 corporate-HR manual speak. I believe heâ€™s an uber-capitalist, and capitalism is a religion, itâ€™s a religion that gives him sanity and which ultimately drives him insane and pushes him over the edge. It’s a mindless pursuit of a goal that can never be achieved. That ultimately leaves only a hunger, which goes back to the coyote â€”this perpetual hunger that can never be satiated.â€