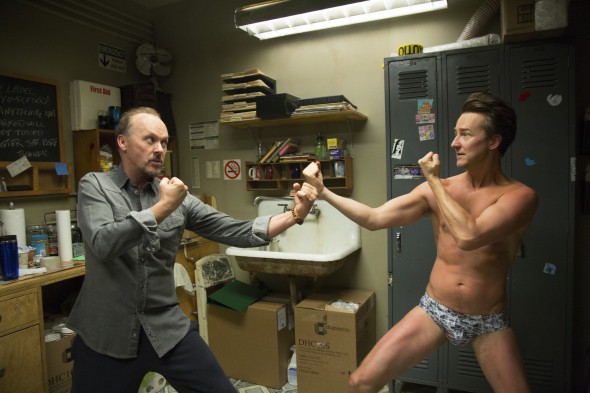 Great heroes always have more worries than others. They run around, worried all the time. Such is the case with actor Riggan Thompson (Michael Keaton), a man who could be smooth sailing on earnings from a famous superhero franchise ( Birdman” or Tim Burtonâ€™s Batman). Instead heâ€™s trying to adapt Raymond Carverâ€™s What We Talk About When We Talk About Love for Broadway. He is submitting himself to the demands of a critically beloved text and theÂ pain of real performance, yet intriguingly with an old vetâ€™s zen. We open the movie with Birdman meditating, levitating in his tightie whities — which is not the only manifestation of his super powers.

The actorâ€™s super powers appear to come from a past life, as his directing skills take a beating at every turn. One actor sucks and the next one, Mike (a grand Edward Norton), has a fee and an ego that wreak havoc on the production. Riggan must learn to control and act toe-to-toe with Mike. His current fling and ex-wife pop in-and-out. The critics say the play canâ€™t be done by a â€œcelebrity.â€Â  The voice of the Birdman is still in Rigganâ€™s head. Â In the wings, his daughter Sam is out of rehab and hates working as dadâ€™s assistant, and becoming possible prey to prowling Mike in the costume room.

In an overall amusing movie, the biggest laughÂ I let out was when Mike throws his glass against the cupboard when he tastes that Riggan has switched his method acting gin outÂ for water. â€œCarver gave his liver for his work!…â€ The second was a moment where MikeÂ walks Riggan a few paces overÂ to a cool after show bar and asks, â€œWhy Carver?â€ Riggan meekly produces a note that Carver scribbled to Riggan afterÂ his student production at Syracuse. He has a debt to pay for the life changing encouragement.

Mike: This is a cocktail napkin. He was drunk.

In a movie that has more ideas than could ever be resolved, Ed Nortonâ€™s witty and rude performance slices into the film with a distinct joy and directness that stood out to me. And the movie in general peaked early when the one-take, quick-paced camera work reveals the intense, improvisational, truly strange, fluid process of acting as it hits its vulnerable and passionate performers for the first time. Â In one inspired sequence with a big crowd and a marching band, the film taps into every actorâ€™s greatest fear to create the kind of freshness needed to adapt the classic work Riggan is obsessing over. Of course, he experiences this acting breakthrough via ignorance, hence the filmâ€™s subtitle.

Naomi Watts and Edward Norton in their brief time on screen evoke with a startling completeness the complex mind of an actor. Mike comes on to Wattsâ€™ Lesley minutes before stage time, which triggers more insecurities for her later. Mike talks endless shit, he pushes and pushes Riggan into a more aggressive and alive performance. But on a balcony he withers for young Sam (a never better Emma Stone) and tells her his only truth and personality is on the stage and he wishes he had her eyes so he could see the NYC streets new again. I imagine that scene is what all art and New York is about. 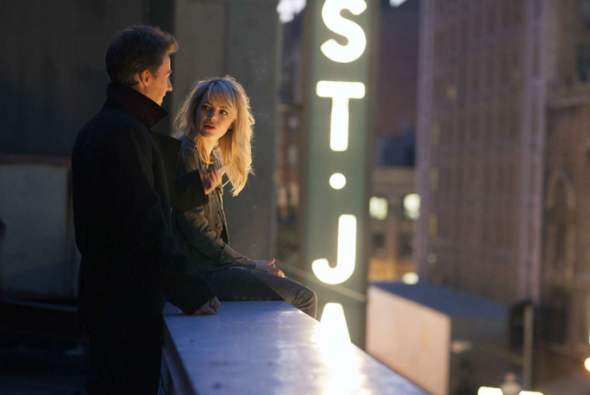 The other over-sized talent here is the director, Â screen poet Alejandro Gonzales IÃ±Ã¡rritu. His past two films (21 Grams, Babel) had such deep running feelings itâ€™s hard to believe that his brain gets in the way of this one, despite being filmed with great skill by Emmanuel Lubezki (Tree of Life) and acted with near perfection.

He has placed Rigganâ€™s entire life crisis into The St. James Theater where events crash along like jazz that works great. But heâ€™s given it a Meta vibe that is three layers deep, and not terribly effective. Thereâ€™s Riggan playing Birdman which is like Batman, level two. On the third level thereâ€™s Rigganâ€™s search for authenticity in Raymond Carver connected toÂ IÃ±Ã¡rritu seeking reality in cinema with Birdman. The fantasy sequence of a faux super hero movie is supposed to be an exorcism for the director, purging himself of the Hollywood trash his son made him sit through. But it plays silly and less skillfully than the subversive moments in Gone Girl, where David Fincher has learned how to draw a popular audience by using all his own means. IÃ±Ã¡rrituâ€™s Â fellow Mexico City soldier Alfonso Cuaron made a more soulful film, Gravity, and engineered it to appeal widely too, without sacrificing a â€œjaw droppingâ€ one-take shot. In the underground world, Fellini (8 Â½), Cassavetes (Opening Night), and Charlie Kaufman (Adaptation, Synecdoche, New York) have already set the bar high for this kind of self-conscious calisthenics.

The meta layer of the directorâ€™s worries, and the sheer effort of Birdmanâ€™s technical marvels get in the way of Michael Keaton, the very man this movie is supposed to resurrect, and it keeps his very good performance from being groundbreaking. There are a number of diversions: Rigganâ€™s past loves arenâ€™t compelling, thereâ€™s a lesbian flirtation that doesnâ€™t pan out, and a scoreÂ IÃ±Ã¡rritu wants to settle with theater critic Tabitha (read: NYTâ€™s Manohla Dargis, who didnâ€™t like Babel, and who addresses her likeness in Birdman with class). When Riggan screams at Tabitha and tells her she essentially hasnâ€™t participated in life, he makes decent points about artistic perception, but forgets that a critic is no less passionate than an “Arteeest,” and keeps those passions alive and pretty well-tempered while watching more movies a year than anyone and (in the best cases) relays the films’ underground messages to readers. Â Itâ€™s a fightÂ IÃ±Ã¡rritu should not care about at this point in his career.

There is an irony this film achieves by virtue of ignorance. The writer Raymond Carver would definitely appreciate the weird places where his art survives (gotta love these stage costumes). But it must be said that he spent a lifetime drinking, experiencing, and closely observing the real weirdness of ordinary people — in upstate Washington, Los Angeles, in Iowa City, in short stories with peacocks on roofs and blind handymen with inner premonitions (Cathedral). The highlights of Keatonâ€™s performance are less in the big moments (tearing up his dressing room, the annoying hallucinations) and more in passing moments when he exudes an ordinary dudeness and a casual decency. Thereâ€™s Keaton wishing his ex-wife no trouble while his emotions are in high octane chaos. Thereâ€™s Keaton running late to a performance and STILL signing an annoying guyâ€™s autograph. Whatâ€™s more, everyone in this movie wants it for Keaton more than Keaton does, including the rave reviewers.

The noble experiment that is Birdman ultimately carries an awkward pace that leads to a â€œcinematicâ€ union of Sam and Riggan, father and daughter, in the final scene. Judging from the heavenly way Lubezki lights the room, I felt I should be experiencing a moment of transcendence. But somehow that moment wasnâ€™t there.

IÃ±Ã¡rrituÂ is a great director, but not a great hero, like Riggan. The clever director couldâ€™ve made a better movie for him.