Blanca, an accomplished photographer, and Dr. Carmen Hill, of Oklahoma City, are reunited once told their childhood friends are dead after they were robbed on a pilgrimage in China. After reviewing what facts they have, the PanamÃ¡ City natives are skeptical, as only one body has been identified and as Dr. Hill spits it, â€œnobody robs poor people.â€ Their doubts are justified when a roll of film arrives from one of the friends, providing evidence of a crusade turned carnage and a religious miracle that Dr. Hill refuses to believe, accusing Blanca of tampering with the photo while developing it in her dark room. Blanca insists on keeping the photographs from the police in order to protect the revelation of St. Mary appearing to the victims, refusing to admit her missing friend could still be in danger. The women receive a harsh awakening as they realize the menacing dangers of China have now come to PanamÃ¡ City to hunt down the truth they are hiding. 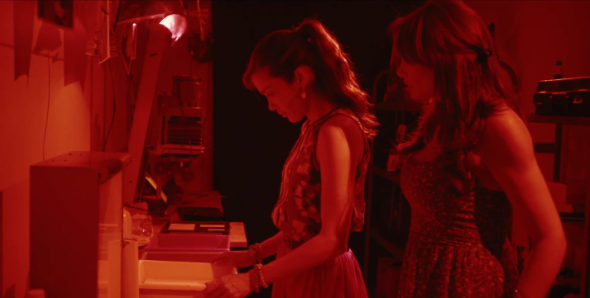 Minus the aerial footage of PanamÃ¡ City, the film was shot in Oklahoma. It was remarkable to me how well they used the Oklahoma landscape and buildings, specifically the gallery JRB Art at The Elms in the Paseo Arts District, where Blancaâ€™s art gallery and home are set. Despite being able to recognize where the film was shot, I had to keep reminding myself that it was Oklahoma as the filmâ€™s setting in PanamÃ¡ City and China were so convincing.

The storyâ€™s plot line reflects the struggle of family when members have conflicting ideas and beliefs in religion. Actresses Lymari Nadal (Blanca), and Patricia De Leon (Dr. Carmen Hill) do a spectacular job of playing strong Latina women that stand together despite the risk and their conflicting beliefs. It is a refreshing portrayal that is sadly a rare find in the film industry and I hope their work inspires future roles for Latina women in film. Steven Michael Quesada, whom youâ€™ll recognize from Breaking Bad, does an excellent job at playing a creepily obsessed â€œfriendâ€ that straddles the line of ally and enemy. The secrets he holds ooze out of him with every appearance and while you think heâ€™s harmless, he proves to be capable of much more in the end.

While the film was an original take on religious differences and womenâ€™s struggle to be taken seriously, I found the ending to have some ties that just were not believable in our day and age. Perhaps I could find the ending feasible if the film was set in an earlier time when we didnâ€™t have the technology we have now, but it is definitely worth your time to make your own assessment of Light from the Dark Room and I hope that you do.

One comment to “deadCENTER Review: Light from the Dark Room”