Just roll with it.

But if you have more questions, I did ask Jim Burns (an organizer and in Brothels), a few things.

OKC.NET: What inspired you all to host this event? Have you been planning it for awhile?

Burns: Iâ€™ve had the idea of a show at an unconventional space kicking around in my head for a while. An event that could not only bring together really good bands, but also be a chance for everyone to get together and hangout. The idea, an event that was a show, but also had a party atmosphere. It was really important to keep it free as well. I mentioned this to my friend Alex Elliot on a whim and he said â€œletâ€™s do it,” so we started brainstorming. We both wanted it to be outdoors and thought Packardâ€™s rooftop would be perfect, Alex got in touch with Packardâ€™s and here we are.

OKC.NET:Â  Tell me a little bit about the line up. I’m familiar with all of them but You’re Welcome – that’s a radio show, so is this mini-fest opening with a DJ set? What can people expect if they’re not familiar with the show or if they’re planning a special sort of kickoff for the event itself?

Burns: Honestly, the lineup is better than I could have imagined, these are some of my favorite bands in Oklahoma City. We wanted to get a lineup together where everyone covered different ground with their music, but as a whole, would come across as cohesive. I really think we achieved that. The entire lineup makes music that can occupy your mind, music that provides an experience.

As for including a radio show in the mix, Youâ€™re Welcome, is a radio show that airs on the Spy/KOSU on Tuesdays 7-9 pm. They only play vinyl records and have some pretty hilarious banter between the two hosts, Beau and Kellen. Youâ€™re Welcome, has done several live recordings around Oklahoma City and we thought it would be a great addition to the evening. They will be recording the show before and in between the sets, so itâ€™s like having a DJ and MC experience all rolled into one.

So grab a friend or few and go take in the OKC skyline with Midtown ears and eyes.

Who’s on the lineup? 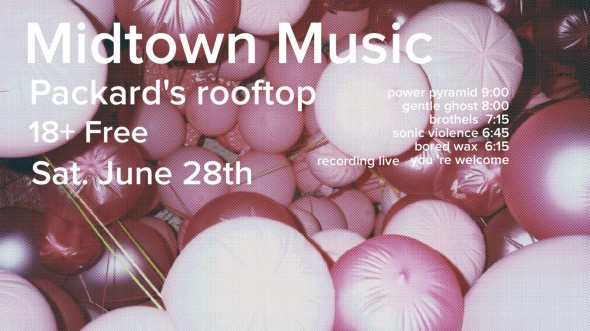 Is there a mix? Of course. But I would encourage you to also check out each of their bandcamps for new material. Especially Gentle Ghost, who didn’t have any SoundCloud tracks available.