SUPER! BitCon, the inaugural gaming convention organized by the Retro Gamers Society was, for lack of a more emotive phrase, bloody BRILLIANT.

I was hesitant to go, to be honest. My editor, a saint of a woman, dangled it in front of me knowing that I’m aÂ geek cultureÂ enthusiast.Â  Obviously it was tempting as this convention promised a lot, but the retro gaming sub-culture had tried in the past to break into the mainstream with lackluster results. Also, Iâ€™d have my daughter with me â€“ sheâ€™s my photography assistant so weâ€™re almost always together â€“ this was to be her first exposure to game-specific culture so it had to be good.Â  There was a lot at stake and Iâ€™m a pretty harsh critic when it comes to my Geek heritage (capitol G).Â  You see, Iâ€™m an old-school Geek.Â  I grew up when the term â€œnerdâ€ was a put-down rather than what you call your future supervisor, and I donâ€™t cotton to wannabes.

I cut my teeth, almost literally, on Pong. Â Not the new-fangled, spit-shined Atari version, mind you,Â noooooâ€¦Â  My mother picked up a used Magnavox Odyssey at a garage sale in 1976. The games and logic itself were implemented in DTL, a common pre-TTL digital design component using discrete transistors and diodes.

Here are my five reasons why: 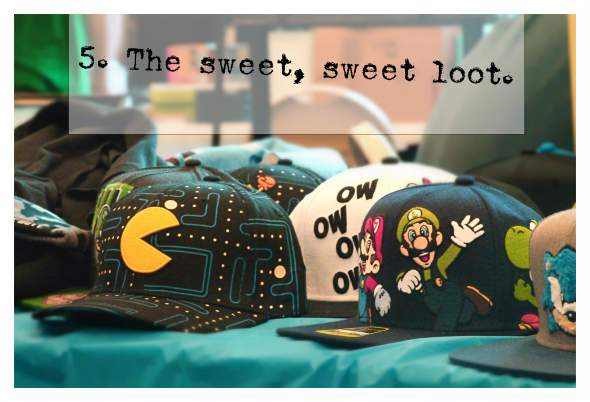 #5:Â  You go to Geek conventions for many things â€“ You go for the panels, always good for getting the latest skinny on a new beta or a piece of hardware that you obviously need.Â  You go for the Cosplay; adults and kids alike, dressed up (in some cases very elaborately) as a favorite character.Â  You go because thereâ€™s the slightest glimmer of hope that youâ€™ll find that one item, that one piece missing from your puzzle; the rare item that completes your collection (or close â€“ you get me.) Â Â But the one thing that you know will always be at a good con is loot.Â  Not just the stuff you need, but the stuff that you want.Â  Belt buckles with Yoshi’s face, fifteen different Gears of War wallets, any number of accessories indicating your love for and knowledge of the PortalÂ franchise.Â  In many cases, stuff that you didnâ€™t even know you wanted!Â  Geek cons are where the informed go to become better informed.

S!BCÂ  did not disappoint – at all.Â  The convention took up almost 20,000 square feet, and much of that was vendor space. From new, pop-culture-referencingÂ accessories to refurbished games and consoles from every platform you can imagine, all the way to boxes of pieces and parts for those that like to DIY their collection, S!BC had it all, in spades. Â And yeah, I saw the mint, boxed, â€™72 Odyssey for $800. 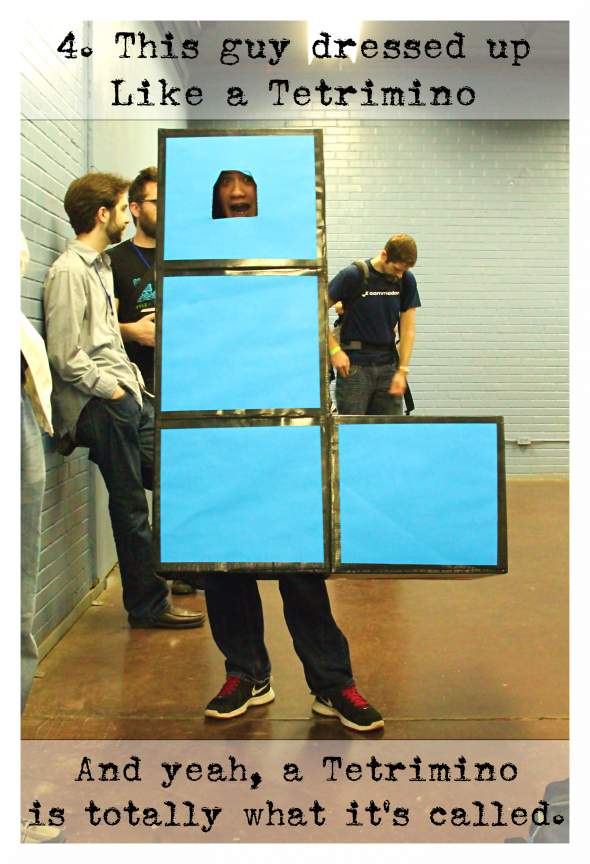 #4:Â  This guy.Â  This one, right here. Dressed up like a bright blue* Tetrimino.Â  He scared me at first â€“ Iâ€™d had the theme from Tetris going through my head for about 24 hours when he came through the crowd.Â  I was fairly certain that I was hallucinating at firstâ€¦if I was at all concerned going in, I was totally at ease now. Â Some people would be taken aback or maybe a little nervous at some guy running around in a costume modeled after a portion of a thirty year old video game and giggling maniacally, but these were not ‘some’ people, these were ‘my’ people, and this was my welcoming committee.

*Sure, yes, a purist might point out that in the original game theÂ â€œJâ€ was blue and the â€œLâ€ was orange, but weâ€™re all friends here. 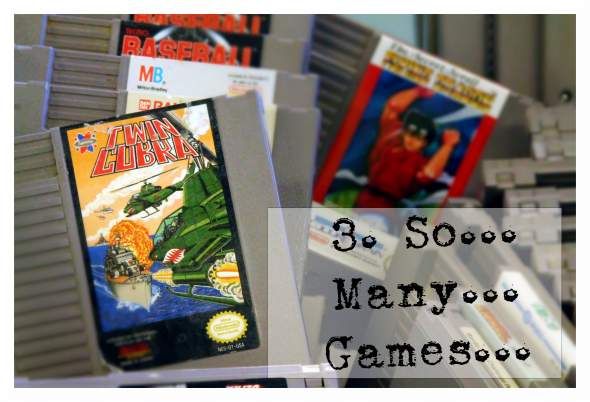 #3:Â  If you were looking for a specific game and couldnâ€™t find it, you simply werenâ€™t looking with sincerity. Even with the tens of thousands of titles (for just about every medium) displayed on the tables, in the boxes, in dump-bins, and on wire racks lining the walls, most of the vendors displayed signs or made it clear that this was just the stock that they brought into the building; space limitations and what not.

I heard â€œHang on, lemmeâ€™ go check my carâ€ about a dozen times, and â€œIâ€™ve got one in storage/my garage/back at the shop â€“ hereâ€™s my numberâ€ as many more times.Â  S!BC organizers clearly did their homework and had attracted some of the best-stocked, most well-informed vendors in the culture.Â  The whole building was straight-up Nerdvana. 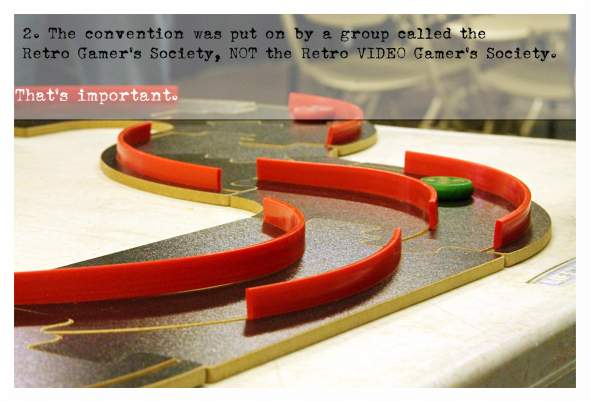 #2:Â  Yes, the Retro Gamers Society was formed with the specific intent of bringing old-school video gamers together and promoting retro video game playing, collecting, fixing, and modifying, but their culture embodies so much more than that.Â  Every retro gamer got their start with dice and game pieces of some kind, and they were very well represented at the convention.

While the core values of the groupÂ are firmly rooted in electronic gaming, the society recognizes the eclectic nature of their membership and they are welcoming to all.Â  If you attend meetings, youâ€™ll meet board gamers, Magic players, and RPG players â€“ all brought together by their love of the pixel. Â  This is a culture with a foundation of gaming and of having fun, and itâ€™s growing like it never has before. 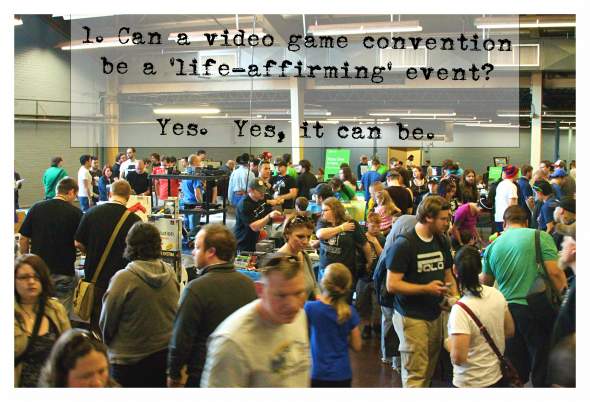 #1:Â  Growing up, I took a lot of grief for playing video games.Â  â€œYouâ€™ll ruin your eyes.â€ Â False.Â  â€œYouâ€™re impairing your ability to learn.â€Â  False.Â  â€œYouâ€™ll shoot your eye out!â€Â  Youâ€™re thinking of a BB gun, now get out from in front of the television.Â  Regardless, my friends and I persevered.Â  We each had our specialty; I was Atari, Trey had the Intellivision, Kevin had a tape-driven TI-99/4A that was almost perpetually loading Tunnels of Doom.Â  Jim, down the street had Wizardry on his Apple, and Jasonâ€™s dad had bloody-well every other console connected to massive 14â€ displays but usually wouldnâ€™t let us play them.

I grew up with the video game culture, and it grew up with me. OKon, SoonerCon, ComiCons in various states, Iâ€™ve been to dozens if not hundreds of Geek conventions. Â Science fiction cons are terrific when it comes to a little mental stimulationÂ and there are always video game references sprinkled throughout the halls, but this wasâ€¦different.Â  S!BC, to me at least, is an affirmation that not only has the video game sub-culture continued to gain steam,Â  itâ€™s no longer a sub-culture.Â  The hall was massive and packed from wall-to-wall with people.Â  Thousands of them.Â  These folks sell insurance.Â  They fix your car.Â  They build houses andÂ the eatÂ their lunchÂ and they run the machines that make the world, and every one of them has something in common with every other one of them; theyâ€™re gamers, just like meâ€¦and thatâ€™s pretty badass.