I’m sure everyone with a social media account of some sort is seeing pictures of Norman’s Medieval Fair floating in and out of news about basketball, weather, music, things to do, memes, last night’s Game of Thrones episode recap, and other people’s business. Up front: I’ve not been going to this particular Medieval Fair for years as it’s really not my thing. But I went this past weekend just to check it out once more, and I think as someone who is willing to observe, you can see going to this three day event that people get into it and that’s what makes it fun even for the non-role players. Sometimes it can get kind of weird, but whatever. It’s their thing and they do it in their own quirky style. 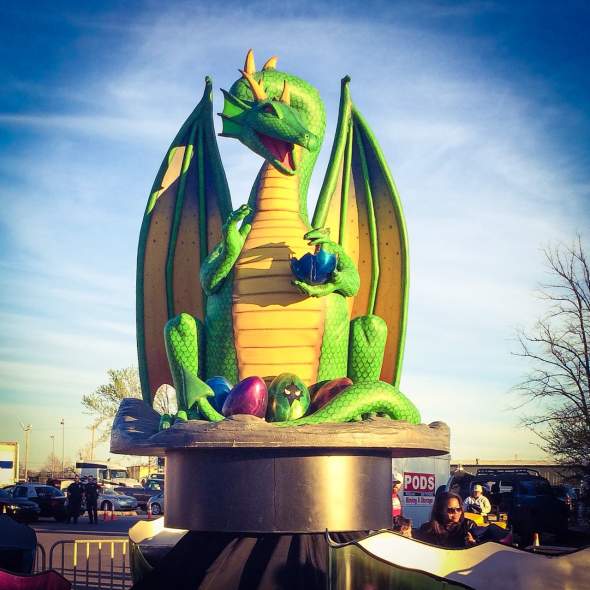 This “not very into” attitude is also why you’re not reading a fashion run down of who wore it best either. Medieval-inspired couture is not something I care enough about to document, sorry. Although I did see great costumes, from historically accurate garb to some clearly whimsical nonsense. As much as I told myself I wasn’t going to ask someone for a photo, I found myself nearly following a herd of faun-people to snap a surreptitious picture of them frolicking through the throngs of fair-goers with their cute little noses, bows and arrows, flower crowns, and antlers. 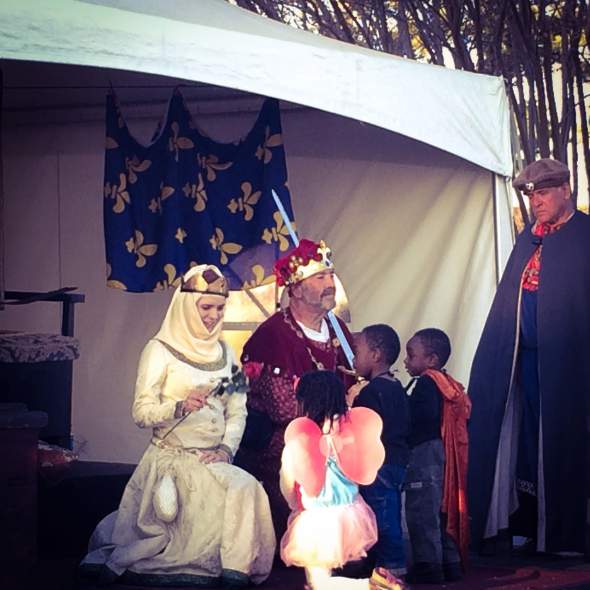 All the little fairies and knights were adorable.

I don’t know. I guess I exist in this weird place of,Â  “Yes, I’ve watched Game of Thrones and read the books, but I’m very hot-cold about it all.” There are the parts I enjoy and parts I roll my eyes at, and I roll my eyes more often than not. And I’ve never played Dungeons and Dragons, not that I’m making a judgement, it’s just not something I’ve ever done. Nor have I played anything like World of Warcraft. You can see how I make for a very enthusiastic tour guide when it comes to this annual Oklahoma festival. 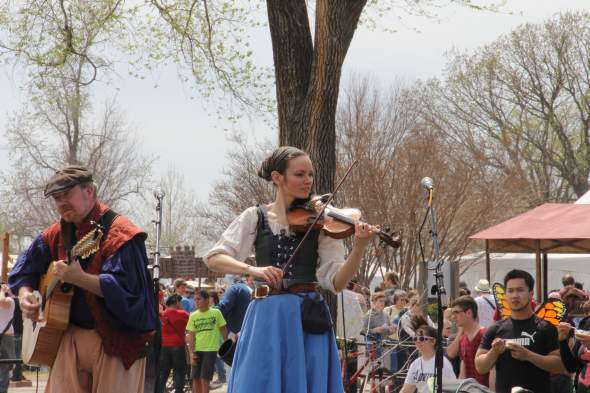 I did enjoy the ye olde balladry, so there is that.

Even if you’re not into this “era” of history where you can get away with dressing like a Hobbit, a Wizard, a Pirate Steam Punk Wench, or a Goth Fairy for a day, going into this fair you realize a) just about everyone around you is really into dressing up, b) if you have kids, they totally get into it, c) it is an excuse to eat something that was fried (or in my case bum a piece of red velvet funnel cake off my kid – for the record chocolate, aka coco powder, is a new world food item) and d) if you’re a little bit of a smart ass, you can have fun making internal commentary about all the things you know are anachronisms, like ye olde curly fries, ye olde kettle corn, and ye olde turkey legs. Just sayin’ those are new world foods items. Pretty sure cheesecake on a stick and Indian Tacos weren’t on the menu either, a boiled sheep stomach full of barley however…not that I think ye olde barley sheep stomach porridge would be appetizing nor easy to transport on a stick, even if you fried it. And no, the Irish did not have potatoes since the dawn of time. It’s called the Colombian Exchange, if you don’t believe me. The Old World got gold, potatoes, corn, turkeys, and a whole host of other goods, meanwhile Native populations got wiped out by disease.

Speaking of disease, I don’t ever recall seeing a booth dedicated to the Black Plague, as the “Black Death” was a significant event in the Medieval era. For the record, I lived in Germany for a few years as a kid and have memories of their medieval festivals. Are there plague victims? Yes there are. They also don’t mess around, their jousts were serious business.

However, what you do see as you walk around Norman, Oklahoma on the first weekend of April: people black smithing, holding court, fighting with rapiers, spinning, weaving, holding more court, singing, being pirates and fairies, evil barbarians, and of course selling ye olde fudge and ye olde sun catchers. I’m not complaining about this. I’m just saying somewhere in the mix my internal “wow” switch never gets flipped on overdrive. 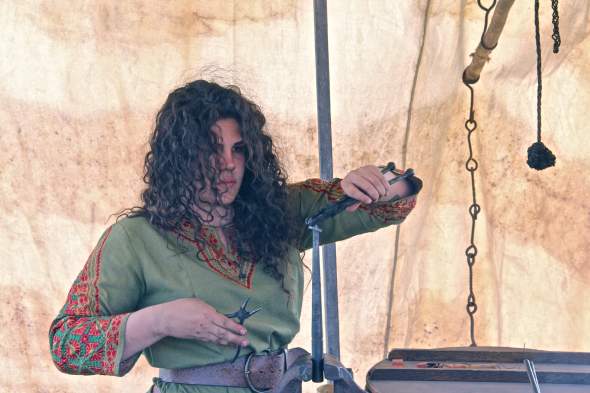 But for some historical context, this event at Reaves Park used to take place back at OU’s Duck Pond. It was a much smaller crowd of not only fair-goers, but vendors. Since the Spring of 2000, I’ve watched it grow into this writhing mass of attendees that filter through a living labyrinth of other attendees, sales vendors, food vendors, performance stages, role players, games, areas of interest, like the Mermaids and pirate ship, to various rides. 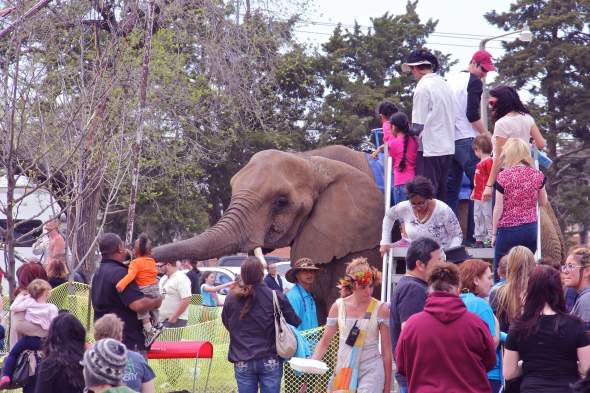 I don’t let my kids ride the elephants or the camels, just because I wonder about the quality of their care and if they’re being exploited, as can sometimes happen when events get to this size and people are in it for the money, and if they are then it is something I don’t want to blindly contribute to, but all that said, I did let my kids ride the air carousel because it was powered by wooden gears hand-cranked by two guys raking in the cash at $3 a ride. They had a full line most of the time. So can you be someone who’s wishy-washy about certain aspects and still have fun? I think so. And to be fair, the organizers did have a dog watering station, so I hope their concern for pets is one that extends to the animals giving rides to attendees. Maybe if I go again, I’ll bridge the gap and ask about it. 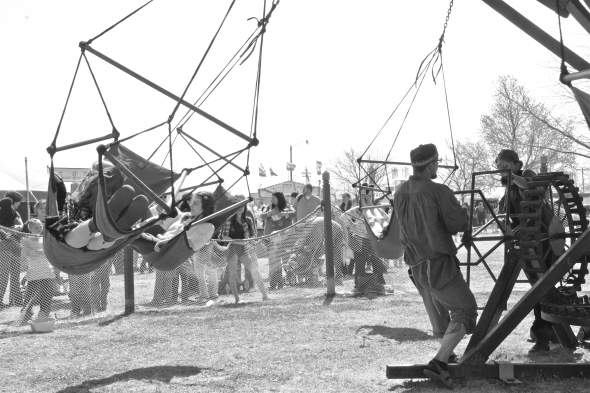 Another reason my “wow” switch is never flipped, is that I’ve noticed as the fair has expanded some of the more educational parts have gotten pushed to the back while shopping, eating, games, and theatrics remain front and center. I understand that to fight and do some of the other “conflict driven” activities, you need space, but it would be nice to have tents like the one on what it was like to be a Medieval era college student not tucked behind everything at the outer most edge. I never did make it back there, but friends with booths at the event told me about its hidden location.

A common misconception is that the era was devoid of human progress, and that is not entirely true. The worst part of the Middle ages was at the start of it, when there was a continental power vacuum after the collapse of the Roman Empire. But even then, it mostly sucked if you were European as other civilizations were making advances. Additionally, the late Middle Ages is when the Gutenberg press was invented. This made books easier to own. Chiefly the Bible, which contribute to boosting literacy.Â  Then we move into the Renaissance and the Age of Enlightenment.

I also remember other years, although I’ve skipped the last 4 or 5, when the weavers and spinners weren’t all in the back either. Still, as events go, this is free to the public, kind of ridiculous, and plenty of fun – even for those of us who never fully immerse ourselves into the world of fairies, courtly love, axe throwing, dragons, and all that Medieval festival madness, it’s still enjoyable to attend every so often.

For the people are who are super into this thing, there’s also another Renaissance Festival out in Muskogee, Oklahoma, which runs May through June. Alas, ye fair people, you’re beasts aren’t allowed. So I’ll give Norman’s Med Fair props for being super pet friendly.

“Join us every Saturday and Sunday, May 3rd through June 1st, 2014! In addition, Student Day is Friday May 9th, and Memorial Day Monday, May 26th. Gates open at 10:30am and close at 6pm. NO PETS are allowed (with the exception of service animals).”