I’m never quite sure what to make of Oklahoma politics. And havingÂ  covered all manner of events in the OKC metro, hopping from one side to another for interviews, I’ve gathered it’s never a good idea to make broad generalizations about a group much less an issue. The best you can do is go into a situation looking for people who are willing to articulate their position in a candid manner.

Before I set out to take photos, observe, and conduct interviews for yesterday’s legalization rally, I had a brief conversation with our downstairs neighbors Pizza23. Owner Justin Price said “This is Oklahoma, we’re the only state that still has 3.2 beer. Do you really think they’re going to legalize marijuana for medicinal use much less do what Colorado did.” He had a point, and while the news coming out of Colorado about their expected State revenue surplus is enviable, that’s really not the issue as bills to legalize medicinal marijuana, at least, in Oklahoma are nothing new. It is all too apparent that it would be a money maker and help treat people with illnesses that range from cancer to seizures. And none of the fallout predicted with Colorado’s legalization of recreational marijuana has happened yet, so what it boils down to is stigma.

The other thing Price said was that I should take pics of the people being arrested for protesting, because he would not be surprised if someone was smoking cannabis at the Capitol to prove a point.

Prior to his parting remark I’d shown him a photo from the Support SB2116 Facebook page responsible for organizing and disseminating information about the event. In the photo a state trooper walked a German Shepard through the Capitol building. There had also been a message from organizers to participants asking them not to show up “medicated.” And if you read through comments on their Facebook page, you’ll see a somewhat civil discussion about how participants think the movement should be represented. For the most part, they want to put their best foot forward and not give their detractors the opportunity to paint them as stereotypical stoners.

Fact is, we all have biases and preconceptions. And as much as I tried to be open minded before arriving at the Capitol, I had my own set of expectations of what I would find.

But rather than filter it all through my perspective, I’m just going to let other Oklahomans who showed up that day tell you in their own words why they traveled from places like Tulsa and Weatherford to demonstrate at the Capitol. For what it is worth, I didn’t see a single person arrested nor did I see someone proudly lighting up a joint in open defiance. I did see some signs that might make more conservative-minded people roll their eyes, but other than that, it seemed like a peaceful rally.

There were a number of curious onlookers who dropped by on their way in and out of the Capitol building. And as much as I tried to get those passerbys to stop for a photo and give me a quick blurb about what they thought, I didn’t find someone willing to do just that. I think the idea of having their image out there connected to an opinion about marijuana legalization was a bridge too far. The onlookers who declined ranged from an older gentlemen in a suit, who stressed to me that he was not a lawmaker and while he thought is was great that I was trying to cover the event, he was also adamant about not making a statement, to a young African American woman, also in professional attire, who flat out said: “I’m sorry, but I cannot say anything.”

Even among those who showed up to the rally to publicly support SB 2116, there were those who didn’t want to be photographed and express their opinion, while still others said yes, but declined to say what their job was because they thought that information was too sensitive.

Clearly Oklahoma has a culture of consequence and stigma attached to cannabis use. Make of it what you will and come to your own conclusions if reform is necessary. 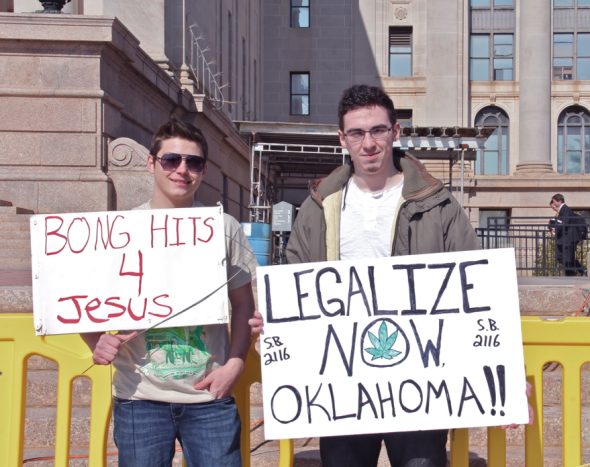 OKC.NET: “Tell me where you’re from, how old you are, and what you do.”

OKC.NET: “In your opinion, what is the most important benefit of legalization?”

J.T. Getkin: “It’ll help a lot of people, young kids who are getting busted for a little bit of weed, from going to prison, and getting felonies on their records and not being able to get jobs later on in life.”

OKC.NET: “Tell me where you’re from, how old you are, and how you heard about this event.”

OKC.NET: “Why was it important to you to come from Tulsa to Oklahoma City for this rally?”

Dylan Reed: “Well, I just felt like if I didn’t do it, that other people wouldn’t either, so it’s either step up or shut up, really.” 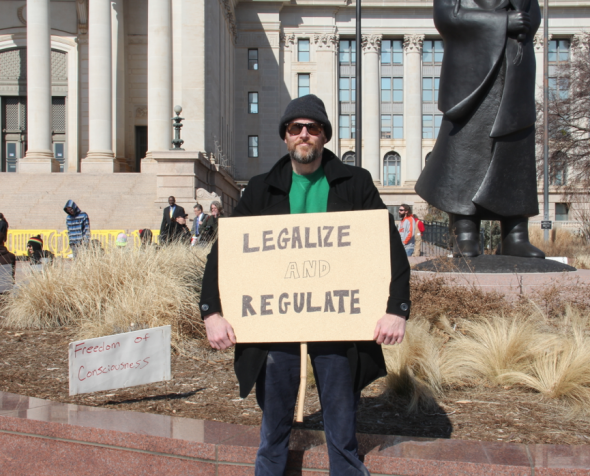 Kelly Akard, 42, from Oklahoma City. I feel it is important to note that Mr. Akard said even though he is an active voter, this was his first time to attend a political rally, and his first time to make his own political sign. He was one of a few who declined to discuss his occupation.

OKC.NET: “So what prompted you to come out on your day off?”

Kelly Akard: “Well it is something that I kind of believe in. I believe in freedom of choice. And I don’t smoke marijuana personally, but I understand that marijuana has medical benefits. So I say lets put it in the hands of doctors and out of the hands of politicians.”

OKC.NET: “What kind of impact do you think it would have on State revenue if it were legalized?”

Kelly Akard: “I think that is good question. I think it will be interesting to see where Colorado is at the end of 2014 and how much revenue they bring in at the end of the year. I would assume it would be in the millions.” 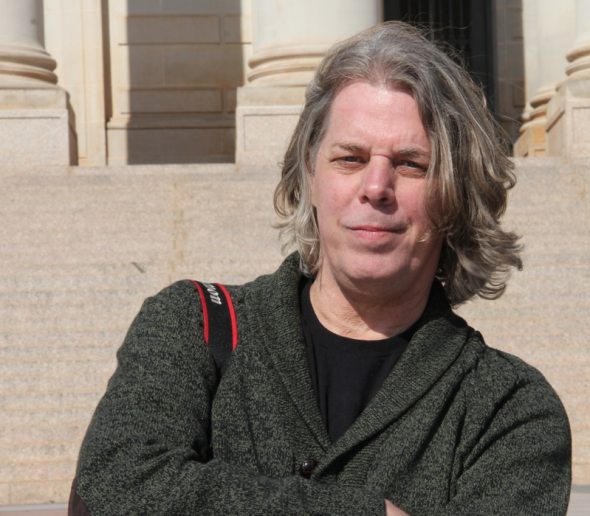 Mark Faulk from Oklahoma City. He says he will be running for Rep. Kay Floyd’s position in District 88.

OKC.NET: “I’ve noticed people are a little more than hesitant to say what they do and provide information about themselves, but they all seem to be here for a specific reason. So what is yours?”

Mark Faulk: “Well, first of all, my brother was a public defender. And right now he is in private practice. He has 4 life without parole cases that are drug related, one of them is related to a marijuana arrest. And the documentary that I’m working on is related to the prison industrial complex. So the reason it is not legal here now is because they need customers for these prisons. And I just find that reprehensible. And you see lives ruined everyday.”

OKC.NET: “When does your documentary come out?”

Mark Faulk: “It’s called ‘Voices in a Jailhouse’ and you can find it on Facebook. There should be a trailer for it out this week. Film will probably be finished by June or July. We’re going to get it out there this year because it is timely and it deals with Oklahoma’s incarceration rate.” 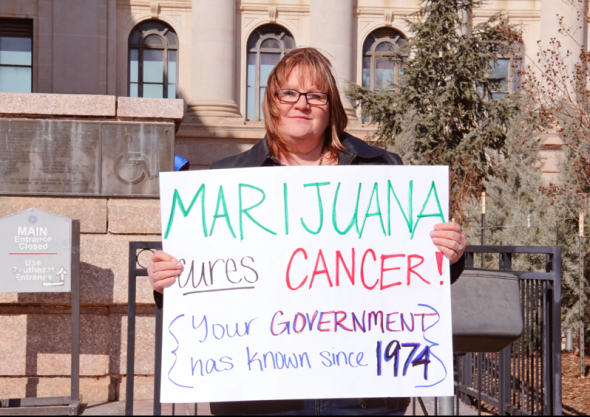 Dondi Cobb, 52, from Weathford, Oklahoma. She owns two businesses SW Automotive Transmission and SW Movers. Cobb said she is in the process of trying to sell off her businesses and move to Colorado.

OKC.NET: “What would you like to say to those who are not sure about legalizing marijuana?”

Dondi Cobb: “You may be on the fence or oppose legalizing marijuana for medical use, but until you have somebody who is ill and needs it, then you will quickly change your opinion. Because I watched my mother starve to death while she was fighting lung cancer, and it’s really, really sad. It is just inhumane to not offer any treatment that’s effective and available to sick and dying people.” 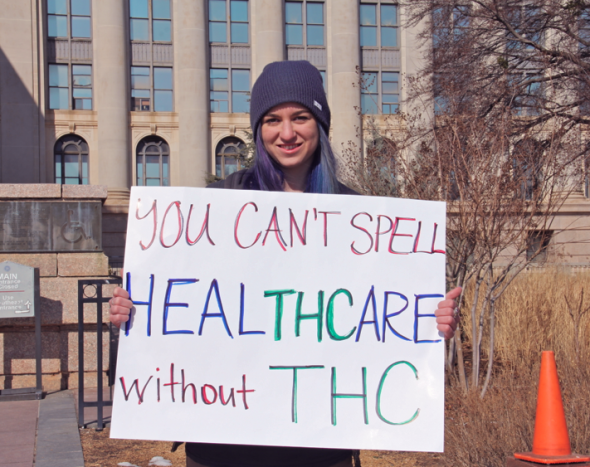 Anna Cobb: “My father was diagnosed with cirrhosis of the liver my freshman year of high school, and his doctor blindly prescribed him Loratabs* for the last four years of his life. They ultimately destroyed his liver. He passed away a week before my graduation, my senior year. I strongly believe that had he been prescribed medical marijuana for the pain, he would have lived a lot longer.”

*Note: I decided to look this up because I was curious. Doctors do prescribe Loratab for cirrhosis and it can destroy your liver. There are websites and books advising people with cirrhosis to get different prescriptions or be mindful about not getting an accidental overdose of substances found in different medications that contain ingredients that damage liver tissue when they are taken in combination. So, a low dose of acetaminophen is fine, but if it is an ingredient in your other medications, you’re going to have a problem with a cumulative dosage.