Finding the music of Rose Windows this past Spring was a very welcome discovery. At the time OKC.NET was gearing up for Austin Psych Fest and Norman Music Festival, so while I don’t exactly remember which music blog featured the SoundCloud embed of “Native Dreams,” what I do remember is that I genuinely liked what I heard from the moment I hit play.

I’d been listening to a lot of different psych rock bands, some were local, like Horse Thief, while others, like Capsula or Suuns, were on the line up for Psych Fest. Still Rose Windows stood out because up until “Native Dreams” I hadn’t heard anyone take hallmarks of the genre and pair it with a sultry female lead vocal quite like they had. The best description I could give at the time was to say: imagine a smokier Grace Slick fronting the Doors while the lighter elements of traditional Eastern folk music meld with the heavier elements of Western blues, metal, and rock.

Now imagine if you will a sonic tapestry. From the start drums set the pace as a flute lightly snakes through the beat, then the bass line provocatively draws you into the scene, and once you’re entranced the Doors-drenched organs and Black Sabbath blues dirge-guitars sweep into the sound scape like a foreboding swirl of fog. At times it’s dappled by a few light notes here or there of guitars that are somewhat reminiscent of a traditional folk tune, maybe of the Persian or Indian persuasion, until the music leads you to the dusky voice of Rabia Shaheen Qazi. Like a shamanistic priestess invoking the memory of shadow forces, Qazi sings of spirit warriors surrounding a sleepy camp. Towards the end of it all you’re left with the impression that “heaven helps a friend.” It’s dreamy and it has story to tell.

If you like this kind of musical atmosphere and evocative narrative, there’s a good chance you’ll enjoy their other songs too. Their Sub Pop artist page notes: “Thematically, Cheveyo describes The Sun Dogs as being about ‘the everyday blues that capitalism and its hit man, religion, bring on all of us.’ More specifically, he sees The Sun Dogs as an acknowledgment of the circular nature of the rat race, learning to accept the evil in the world, taking joy wherever we can, and ultimately disavowing traditions of exploitation and violence.”

Rose Windows, who are based out of Seattle, signed with Sub Pop back in February. I noticed their label had started streaming the entire album on SoundCloud sometime last week. I think after the second listen through, I was completely hooked. And while the single had shaped my expectations, I was pleasantly surprised by the engaging level of diversity of songs on “The Sun Dogs.” Some were folksy and breezy, like “Season of Serpents,” or accented with pedal steel, viola, and cello in songs like “Heavenly Days,” while other songs featured organs and other bluesy-psychedelic motifs like in “Walkin’ With Woman” or “Wartime Lovers,” the latter being more upbeat of the two songs. 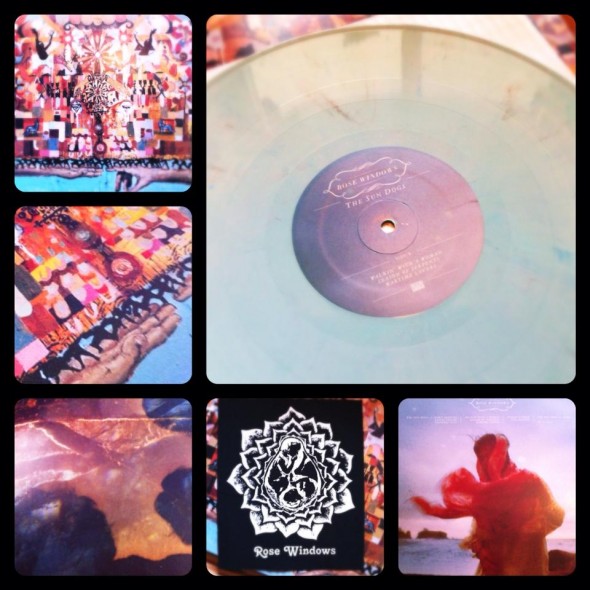 Sub Pop sent quite a few goodies with this album. Stickers for new releases were a given, but I wasn’t expecting the screen printed patch. It was a nice surprise.

Regrettably Oklahoma is not even remotely close to Seattle but at least the Internet makes band interviews possible. The members of Rose Windows are:

okc.net: I read in Seattle Weekly News that the title of the album came in part because of a natural phenomenon known as a Sun Dog and because of a Tom Waits album called “Rain Dogs.” What other conscious influences came into play on “The Sun Dogs”? Were these songs written with a specific sound scape in mind, or was it a more organic process that that?

Cheveyo: I have no idea.

Petersen: Most of what we do tends toward the organic, natural flow of how life plays out. The deliberation comes in our active search for music spanning time and geography.

okc.net: What was it like to work with producer Randall Dunn, and what were some of the contributions he added to the album?

Petersen: Randall has an eloquent, yet ambiguous, way of pulling the best out of the musicians he works with. Rather than asking or giving pointed ideas, most of what he offers is in a more metaphoric sense.

okc.net: Is everyone a Seattle native or do some band members come from other parts of the country?

Petersen: Richie is the only native. Rabia has lived here for a while but came by way of Texas. Chris, Pat and David are all Texan ex-pats. Veronica is a Hawaii native and I grew up around the Western states and England.

okc.net: I noticed Rose Windows is playing several festivals in addition to concert dates, but would the band ever play Austin Psych Fest?

Petersen: Theyâ€™ve never asked, I heard they only pick bands.

okc.net: Speaking of other bands, who are you all listening to right now?

Davila: Breaking down in the Mojave desert, it was always a dream of mine.

Petersen: Driving through the Red Wood Forest we got stuck when a red wood fell across the high way. It was too narrow to turn our rig around so we had to unhitch our trailer, turn the van around, and re-hitch. All during torrential down pour. A real team building experience. 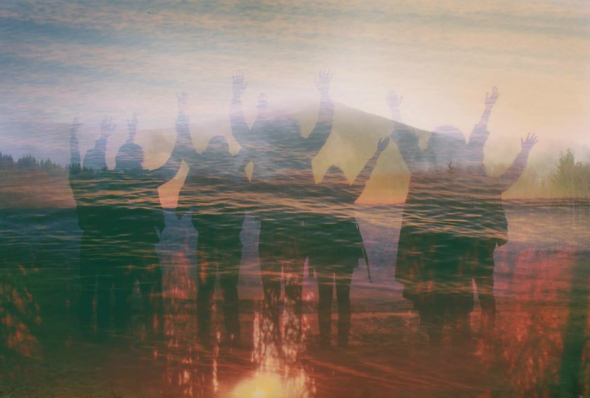 okc.net: I’ll readily admit, I pre-ordered the vinyl, but was it the band’s choice to do the limited-edition blue marble vinyl or was this choice a collaboration between the band and Subpop?

Petersen: Sub Pop offers a loser edition with all their LP releases which is a colored vinyl edition. We got to pick the color and went with a light blue marble. We wanted the look of the sky, it seemed fitting with the album and the time of release.

okc.net: Who designed the album art?

Petersen: David Teichner painted the original piece that became the cover. All of our photography is by Alison Scarpulla.

okc.net: Last, what would be your dream line-up at a music festival?

Cheveyo: We should tour with Wu Tang Clan. Wu Windows 2014.

You can follow Rose Windows on Facebook and check out their artist page on Sub Pop. Their album “The Sun Dogs” can be purchased here.

Edit 10/28: They and The Moondoggies will be playing Opolis in Norman. Doors open at 8.