Oklahoma is not the flat ride that Cindy Sheehan expected.

â€œWe rode in from Amarillo, which is supposed to be a thousand feet higher in elevation than Oklahoma City.” Sheehan said, “Maybe thatâ€™s the case eventually, but it seems like 99 miles up for every mile down.â€

Despite a journey that began almost nine years ago, she still has a long way to go. Cindy Sheehan made international headlines eight years ago when she camped out in front of former President George W. Bushâ€™s ranch to speak out against the war in Iraq. Her son, U.S. Army Specialist Casey Sheehan, was killed in action. â€œHe was murdered,â€ she says, obviously weary. â€œThe Bush regime said there were weapons of mass destruction in Iraq. It was a lie. And my son was murdered for that lie. And today, more parents are losing their sons and daughters to more lies.â€

Continuing to speak out against war, Sheehan has begun a new project: Tour de Peace. Sheehan and members of the Tour de Peace group are biking across the United States to highlight how US dependence on fossil fuels feeds neocolonial action abroad. On April 4, 2013, nine years after Casey Sheehan was killed in Iraq, Cindy departed her home in California and started riding towards Arlington National Cemetery. â€œThis speaking tour is important,” Sheehan said, “because the Obama regime is carrying on the same policies as the Bush regime, as the Clinton regime. Theyâ€™re all the same. We have the winner of the Nobel Peace Prize in the White House and heâ€™s flying remote-controlled killing machines into other countries and killing little kids! Heâ€™s allowing wiretaps on our phones, keeping people in a gulag in Cuba without trial, and attacking people who reveal the truth about US war crimes, like Bradley Manning. Heâ€™s a failure overseas and domestically, pushing for traditional schools to give way to corporate charter schools, overseeing the tar sands pipeline being constructed, and restricting our civil rights with the NDAA. Millions of people protested when Bush started this sort of thing â€“ where are they now, when Obama is going even further? Supporters of Obama should be pee-tested for an overdose of â€˜Hopium.â€™â€

Hosted by the Central Oklahoma Black/Red Alliance (COBRA) in Oklahoma City at the First Unitarian Church, Sheehan told the gathered crowd that she wouldnâ€™t quit until justice is served. â€œI demanded Bush explain to me what noble cause my son died for. Today is Motherâ€™s Day. I will be riding to the White House to demand what noble cause has killed thousands of other motherâ€™s children.â€

She notes that the day Casey was killed coincides with the murder of Martin Luther King, Jr., in Memphis. â€œMartin Luther King said we face the giant triplets of racism, materialism, and militarism. That was 45 years ago. And today, weâ€™re still fighting racist wars for material gain. It has to stop.â€

â€œWeâ€™re going to deliver these demands to the Drone Bomber in Washington DC, a place I like to refer to as â€˜WashedUp, DeCeit.â€™ We ask anyone who supports an end to empire to join us,” Sheehan said.

The Tour de Peace will conclude on July 3rd, 2013, when members of the group present their demands at the White House: an end to US-fed war, an end to immunity for US war crimes, an end to suppression of civil rights, an end the use of fossil fuels, an end to the persecution of whistleblowers, and an end to partisan apathy and inaction.

For more information about the Tour de Peace, visit http://www.tourdepeace.org. 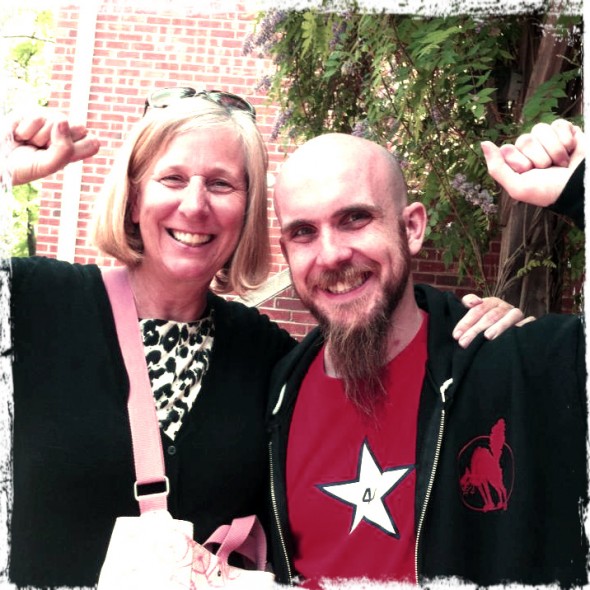 One comment to “The Road Less Taken: Cindy Sheehan and the Road to Peace”