As I write Lena Dunham has become a kind of phenomenon. Advertisements on the web ask “Want to be the next Lena Dunham?” Time Magazine lists her as one of the year’s most influential people, not under the “Entertainer” label, but under “Icon.” The blogs blow up with admiration or heated dislike. Girls who normally watch sitcoms find themselves mesmerized by Dunham’s unique “raw” quality.

Could we go back to Dunham’s first work and find out what all the fuss is about, yes and no. “Tiny Furniture” is good, but not a masterpiece.

“Tiny Furniture” is essentially Dunham’s portrait of the artist. Her mom doesn’t understand her, her sister is at odds with her. At a party she’s introduced by a well meaning friend to a comic who could hardly qualify as a comic, except in our age. He dresses in a cowboy outfit and delivers the maxims of Nietzsche while on a playground horsie. This video strikes every other character in “Tiny Furniture” as stupid. But Jed seems more than pleased with himself. Dunham’s character (Aura) chooses to tell everyone that this guy who’s staying at her place is kind of a big deal on You Tube. If it is true that the artist is what The New Yorker said of John Updike, that they spend a lot of time liking things, then Dunham is most certainly that. She likes Jed (Alex Karpovsky) against her friends’ and mother’s opinions. And probably against the opines of viewers like my friends who dislike the idea of Dunham’s work because in their own lives they’ve already gotten enough of self-loathing, wandering young people. (While what’s happening with Karpovsky on screen here is that he quite likes his transient life).

Aura meets another artistic ally who will give her some support. It’s Charlotte (Jemima Kurke again of “Girls”). The girl at the opening party tells Aura that Charlotte is insane and she should pay her no mind. Yet Charlotte and Aura hit it off. Aura shows Charlotte her You Tube art piece, her college self getting into a fountain wearing only her underwear. The You Tube comments roll in: “Whale!,” etc. Charlotte says that she thinks Aura’s a genius. The underwear artist has found a friend.

I could go down the list of other self discovery moments that happen to Dunham in “Tiny Furniture,” but I’ll stop to say that if it isn’t a laugh riot or a tragedy it all feels very real and natural, sometimes its amusing, vulgar, and sometimes it hurts. I would like to go back to that significant thing Dunham does, to acknowledge that anger and rage exist.

The first fight happens between the post-graduate Aura and her mother. Mom sweats about her daughter freeloading, having a friend stay over and drinking her wine. Mom is successful, the daughter has serious doubts she will have similar success (she can’t even get laid, her sister tells her during fight number two). The mom plays it cool while Aura melts, wiping items off the table and telling her sister that she’s having a very hard time getting adjusted to life after college. Their cold reception of this burst of emotion make her worse. Aura tells them she hates them. 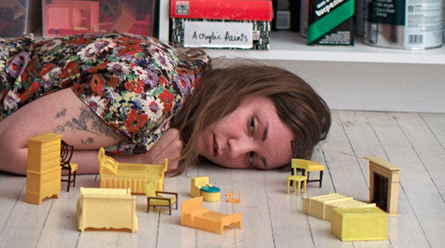 The second fight happens when the younger sister Nadine (Lena’s real life sis Grace Dunham) has a party and Aura is supposed to be the authority. The authority has flagrantly been undermined. So she calls in Charlotte as cavalry. Charlotte’s solution is to give the 17-year-old boys at the party lap dances. Aura walks around in her underwear and demands Nadine talk to her. In the kitchen it’s someone else’s turn to get pissed, and so Nadine calls Aura pathetic for needing attention so bad that she’ll parade around in her underwear in front of underage guys. Aura shrugs and tries to take the argument back to its roots. But Nadine is horrified. “You disgust me, you disgust me.”

Aura responds not by screaming, but by making a silly-pissed off face and swatting Nadine with a wooden spoon.

The comic timing is just right, and new feeling, Dunham’s contribution to a smart, nerdy grace that Woody Allen flavored his own way in the 70s. She keeps the rage light by taking a wooden spoon to Nadine. It’s the best moment in the movie.

Dunham is tough enough to let the anger in. She’s funny too. “Tiny Furniture” is the promising debut of a woman with many moods waiting to be written. Where she writes from should be no bother, as long as she keeps caretaking the gift.

You can put “Tiny Furniture” in juxtaposition with Dunham’s most insanely compelling achievement to-date, which is far as I can tell is Episode 4 in season 2 (“It’s a Shame About Ray”) of the HBO series “Girls.” It’s a fight episode. It starts off at a dinner party. Two of the couples will have heart-to-hearts after awkward wounds are opened back up over Pad Thai. Cross town Hannah’s (Lena Dunham) other friend Jessa (Jemima Kirke) is having dinner with her new husband’s parents (featuring a pitch perfect suburban strange cameo by Griffin Dunne). First the mother-in-law unravels the fact that Jessa only went to college for 7 months. A comment about being “clean” is pushed further to reveal that Jessa was once addicted to heroin. The husband Thomas-John (the omnipresent “Bridesmaids” sport Chris O’Dowd) is becoming more embarrassed. The mother tells Jessa she has found herself in a “successful situation.” Thomas-John is a successful businessman, as he self proclaims: a miracle, a person who has made a profit out of the recession. The dinner is ruined.

Previous episodes have shown a genuine chemistry between the two despite their disparate backgrounds, she a world traveling, glamorous flake, and he an uber responsible and successful dork. It’s characteristic of Dunham’s writing to take two different character types and crash them together. The fight that Jessa and Thomas have back at the apartment is one of the rawest and hurtful arguments I think I’ve seen on film, at least since “Who’s Afraid of Virginia Woolf.” The acting is incredible and set at a careful pace that feels coldly natural. The combatants hurl insults at each other. The filmmaking so fearless it hurts with a hot pleasure.

“You’re just a stupid hipster who is munching on my hay.”

“I tell people you are a test tube baby, just to give you some edge.”

“This is the biggest mistake I have ever made.”

He calls her a whore, she punches him and breaks “his Huey” award, which he bemoans. Among all this heartfelt carnage he weakly says, “I got that for being a … humanitarian.”

How quickly a real argument between 2 people can end something that just an episode prior was so full of life and pleasantries. It is a Dunham goldmine: a natural attraction of opposites. By juxtaposing the argument with the in-laws dinner we get the impression that the words coming out of Jessa and Thomas’s mouths aren’t really theirs. Rather they are highly charged variations on stigmas people use in society to more easily mark the way they make their way through an ever confusingly hyper social world, with designations that end up dehumanizing people and cause them to hurt each other. The things their parents, TVs, and whathaveyous have told them about the other. In reality, the character Jessa is a mess and would have likely wreaked confusion on the man’s life, yet there’s still a heartbreak in seeing the easy ideas prevail here. The idea of a “successful bore” and “dissolute hipster” has some truth with Dunham’s characters. But it’s not all of the truth. As soon as the fight is over, and love an impossibility, we have the feeling they feel miserable and empty; and regret everything they said.

The damage is done.

Lena Dunham has been described as a breaker of taboos, in the sense that she is a voluptuous, traditionally Jewish looking non-supermodel who frequently shows her naked body on screen. But the taboo I most admire her for breaking is the one of anger and rage, this so stamped over the forehead of the culture that we need to smile and be happy all the time, to keep calm and carry on. This isn’t the case for the hipster and the business man here, and it’s not the case for anyone. Life pisses us off and brings laughter, and her characters bring that out very well. Seeing no point in ignoring such a talent, I became a lifelong Dunham fan in this episode. I see a confident writer at war with stereotypes. Starting with “Tiny Furniture” and moving on to the acclaimed “Girls,” she seems to be very comfortable and deft at caring not for cardboard figures like the hipster, but for working with what she has–hipsters. They are some of the things we thought and feared they were. But they are something more than that too.

If you’re a film buff, take note that “Tiny Furniture” is also available on Criterion and features interviews with Paul Schrader and the late Nora Ephron.