My first time attending the H&8th Night Market was in the fall of last year. I’d been hunting for a ticket to Washed Out, which were sneakily being given away via social media alerts. My destination that evening: Elemental Coffee. I’d heard about the H&8th Night Markets for awhile, but just hadn’t had a free night to go. And technically that evening wasn’t free, I was at the H&8th Night Market for about 30 minutes before I had to turn around and go home. I believe the other event I planned for that evening had been a DEERPEOPLE concert. But during the short time I was at the market, I’d been really impressed with the turn out, mostly because it was cold and it was the last one of the season. And this is to say nothing of the amazing sights and smells. I decided when the new season started I’d return with my entire family in tow.

I told my husband we were spending the last Friday of the month at H&8th. I had many reasons for us to attend this particular H&8th Night Market, one of which was trying to see Horse Thief play on stage again. The last time we’d seen them was at a indie music festival called Schwarzstock that past May. Alas, this year’s March H&8th was crazy! It was the first mostly decent patch of weather anyone had seen in awhile, so naturally everyone decided to come out that night as well. It is estimated that over 2,500 people attended that night.

It wasn’t bad, but the lines got long. The music was hard to watch and hear because the crowd waiting to order and pick up food started to back into audience area, and overall there were just tons and tons of people. This isn’t to say we had a bad time, but we did end up leaving early. Mostly because I was hungry and waited over a half hour at one particular food truck. MotoChef: if anybody from your staff is reading two points: 1) the food is awesome, but 2) your wait time is completely ridiculous. I was in the process of trying to get a refund when my order finally arrived.

Alright. This isn’t to say all the food trucks were running behind. My family, wisely, chose to hit the BBQ food truck Wild Al’s. Their timeline went something like this: wait in line, order, wait on said order, go sit on the lawn, eat dinner. After they finished eating, my kids played with other kids, my husband had time to grab another beer, and sometime later I got a text asking what in the hell had happened to me.

So where was I at? Still waiting on a pulled pork sandwich I’d ordered at about the same time they were ordering their food. By the time it finally came out, one of my other kids said she was hungry again, so like the mom I am, I gave her my dinner. Let me say right now, I’m not a martyr parent. So I did have a couple bites from the sandwich and the potato salad side dish, and it was great, but I was ready to leave and go get something to eat and drink elsewhere. Despite my experience, which had been fine up until ordering my dinner, the rest of my family really enjoyed themselves. My husband noted some ways that the crowd flow could have been better, but ultimately said he wanted to come back and thought the whole idea behind the H&8th Night Market was really cool.

However, I’d heard other people that evening complaining about how they were never coming back. I think that’s a shame. Sure there were crowd issues, but as with any regularly occurring event, or any event in general, there will parts that are less stellar than others. Here’s the other thing: because this night market happens monthly, it means whatever didn’t work last month has the opportunity to be improved upon by the following month. And I believe in the vision that the event planners have about what this kind of monthly event affords a growing community.

To that end, when okc.net received a press release, I was happy to see they were taking steps to improve crowd flow for this Friday’s market. Here’s the gist:

“A free bike valet service will make its debut at the April event; check-in is behind Elemental Coffee.Â  Food trucks will be pushed back approximately 4 feet to the curb and realigned in a wing formation around the live music stage, providing additional walkable space and encouraging more use of the lawn area for games and activities.

Food and beverage output will also be increased to accommodate large crowds.Â  Food vendors will coordinate menus to reduce overlap and share best practices to increase speed and efficiency.Â  There will be more lighted outdoor furniture, spread more evenly across the event space.”

What else is new about April’s H&8th Night Market?

They’re also the official Festival of the Arts Friday night after-party and Ludivine will donate 25 percent of bar sales to Arts Council of Oklahoma City.

I also contacted organizer Laura Massenat. Elemental Coffee is her business, and it is one of the sponsors of this free event. She took time out to answer some questions I had about this month’s H&8th.

okc.net: How much of a huge surprise was last month’s turn out?

Massenat: I was not surprised at all, start out with a great concept and community and add the magic and energy of Jonathan Fowler and you can’t help but kick it up a notch.

okc.net: Did you get a lot of feedback after last month’s event?

Massenat: We got a ton of positive feedback, our community had a blast! We knew that improvements were needed to decrease wait times and feed the people, so we decided to focus on increasing food and drink output and improving crowd flow.

okc.net: What would you tell people who went last time and were overwhelmed?

Massenat: Come back this month! COOP Ale is quadrupling their capacity to serve beer and we have added trucks: including Hawk’s Hot Dogs and Pizza23, who will be able to serve quickly, as well as selling grab-and-go salads and hummus and chips inside Elemental.

okc.net: I read there will be more seating, but should people still plan to bring a blanket and/or chairs?

Massenat: There will be seating, but people should plan on bringing blankets and chairs to spread out on the lawn. We will again increase capacity in May with a new sponsored seating area, but I can’t give the details yet. No matter how much seating we add, attendees will always be encouraged to bring their own!

okc.net: I was standing in line at MotoChef, and while they make great food, the few times I’ve been to their food truck during events (even outside of H&8th) they have taken over 20 mins to get an order out. Do you have guidelines for the food trucks when it comes to speed of service?

Massenat: We have guidelines regarding number of servings available and length of service, but we have not set any on the speed of service. We are getting together a “Food Truck U”, headed up by Jonathon Stranger at Ludivine and Alan Bouda of Wild Al’s, that will take place before our May event with a mission of helping trucks prepare for the type of crowds we are experiencing.

okc.net: I know you said the bands/stage will be farther away from the food trucks, but is there a chance the lines and the audience space will overlap like last time?

Massenat: Our team has given this a lot of thought. We want to keep the organic feel of the event and not put physical barriers between patrons. For this month, truck lines will be taped on the pavement and will move lines away from the audience space.

okc.net: Someone told me you’re planning to expand to a second street, not this month, but hopefully in May. Do you think this will happen? And will it greatly improve crowd flow?

Massenat: A larger site would certainly improve crowd flow, increase available seating, open opportunities for participation from more vendors. It also requires a return to City Council and an approval of the change to our traffic plan and road closures. We have not yet officially requested a change to our permit.

okc.net: Is there anything I haven’t asked about the upcoming H&8th, or last month’s H&8th that you would like people to know about?

Massenat: For me, the most exciting new addition to the event is the valet bicycle parking. This allows families to ride over from the neighborhoods, or people who are driving in from other parts of the city to park further away and hop on their bikes, which we felt was a creative way to help alleviate parking issues and encourage cycling in OKC. Starting next month we hope to organize for “ride ins” where patrons can park at remote locations and ride in to the event as a group. We are partnering with the DNA Racing Team on all things cycling.

Check out H&8th’s website to see the full line up of food trucks, music, and sign-up for updates! 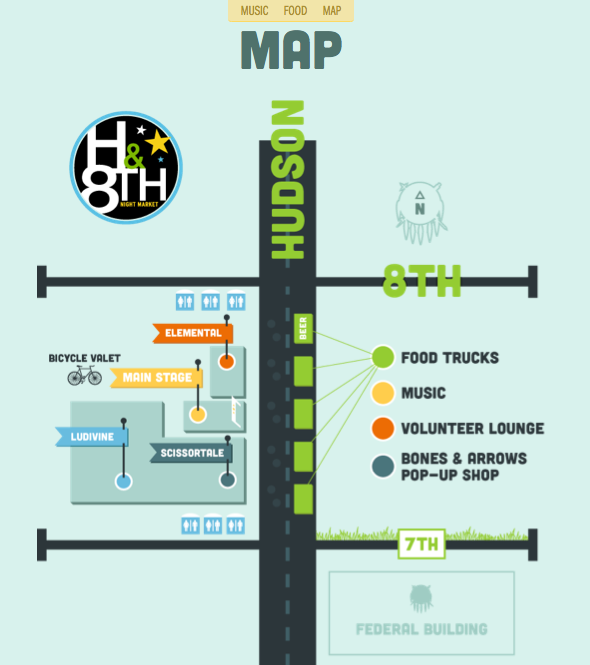