NW 39th St. is a contradiction and a half. What is essentially an unlovely stretch of access road is also one of the primary night life destinations in OKC as there is large concentration of GLBT dance clubs on this tiny stretch of pavement. Unlike many gay neighborhoods in other cities, however, 39th is a ghost town during the day, aside from a few shops and restaurants. As soon as the sun rises, 39th goes to sleep.

One notable exception to this is Beans and Leaves, a comfortable little coffee shop on Penn and 39th. If you like to start your morning with a Chai Tea rather than a vodka tonic, then this is the best non-franchise coffee option in the neighborhood. 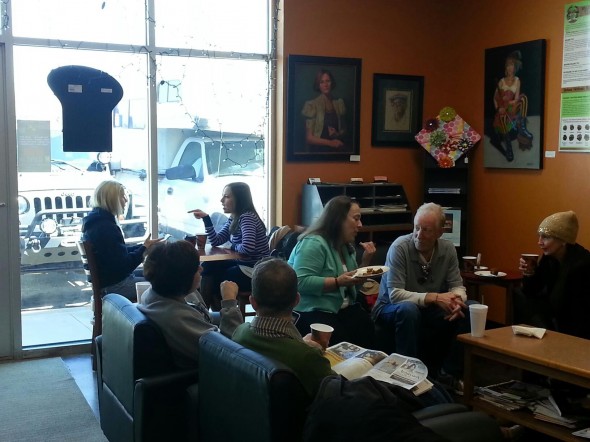 Beans and Leaves has been in business for about a year and a half. In that time it has become one of the primary non-nightlife hubs on the strip. The cafe sports an extensive menu of beverages and sweets. But that is set to change as daily soup specials have now hit the menu. They hope soon to add other lunch options as well. It is also their intention to source all their produce from the Oklahoma Food Coop. When we visited on Wednesday afternoon, there was a healthy turnout of patrons sipping coffee, chatting, and using the free WiFi.

After working to establish the cafe, owner Gary Devanney is stepping away from Beans and Leaves by handing management over to to Allison Blanchard. The new team in place has big plans for the space, booking dozens of live performers and hosting monthly events to help bring people onto the strip for reasons other than a great party.

“We want it to be a nice, casual place for people to hang out, sort of like what Coffey’s was” said Jennifer Hudgens, referencing the belated Plaza District institution Coffey’s Cafe.

In addition to the live music (mostly singer songwriter, in true coffee house fashion) poetry, and belly dancing, Beans and Leaves is also a popular meeting place for local community groups. It is in this capacity that Beans and Leaves is taking an active role in the next phase of development for the 39th Street enclave.

Jeremy Crites, of OKC Pride, says that there isn’t a formal 39th St Planning Committee as of yet, but that stakeholders are well on their way to creating one. This past Tuesday 20 people met at Bean and Leaves to discuss the future of the district. City Councilman Ed Shadid, City Planner Kim Cooper Hart, and Ward 2 Traffic Commissioner Rob Littlefield, along with interested business owners and residents voiced not only concerns about traffic and safety, but discussed what they’d like their community to become.

Even at night, 39th can feel less than festive. As with many gay neighborhoods in cities surrounded by conservative rural areas, 39th is a frequent destination for transients and runaways cast out from their communities. The lack of housing, health, and addiction services in the neighborhood are a glaring oversight. Another major problem has been the large number of unpleasant encounters between pedestrians and cars, especially along Barnes.Â  With GLBT people and institutions maturing and diffusing throughout the wider city and the annual Pride Parade moving downtown in the last couple of years, the district is faced with an existential challenge: adapt or vanish.

Recent successes in developing neighborhoods closer to the urban core (The Plaza District, 9th Street, Midtown, Paseo, and others) offer a tantalizing taste of what a little concern and planning can do for a neighborhood. Crites says this group of city leaders and citizens will soon meet again to become a formal organization within the framework of the Neighborhood Alliance. Right now efforts are being coordinated through OKC Pride’s website via their “Save Our Strip” page. They hope to have a Facebook page set up soon to further engage the community.

The nightlife and weekend party atmosphere of 39th will not likely disappear any time soon. But at establishments, such as Beans and Leaves, the stakeholders hope to show that their neighborhood can be just as much fun during the day. 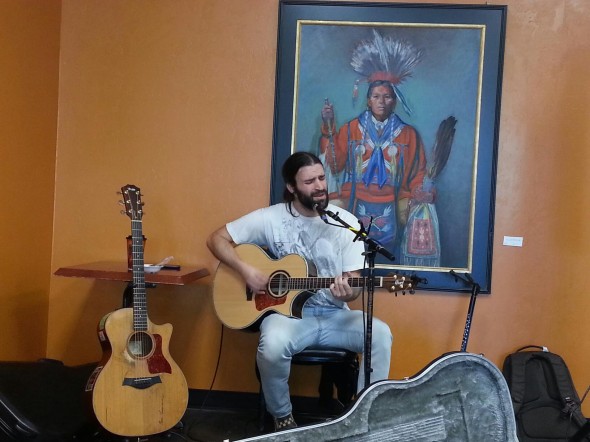 Recurring Events at Beans and Leaves:

Every 4th Wed 2-4 pm there is an art critique meet up where emerging artists are encouraged to participate in constructive criticism.

Every 1st Sunday there is a poetry open mic hosted by noted Oklahoma poet Dorothy Alexander.

MOST Sundays there is 2-4 live music.

One comment to “Beans and Leaves and the 39th St. Blues”