Thereâ€™s not really a good way to say it: the Norman mayoral election is bonkers.

In one corner, you have a mayor who has served since 2007, responsibly guiding the city through the recession without slashing public programs or driving the city into fiscal ruin. So far so good. In another corner, you have a cynical businessman who has built his entire campaign on a series of easily debunked lies. And in the third corner, you have a crazy person who wants to dam the Canadian River and thinks the mayor has invited the UN to disarm all Americans. Clouding the issues as they stand, you also have a city councilman working as a paid campaign consultant who is using his position as Chair of the cityâ€™s Oversight Committee to throw out accusations of ethics violations while insisting that he is not also in violation of restrictions on candidate endorsements.

The “Would-Be Guardian of Liberty,” David Kempf, is outrageous, but at least heâ€™s entertaining. On the political spectrum, heâ€™s well to the right of, say, Alex Jones. Nothing I write about him could possibly illustrate this better than his own words, so here you go:

â€œI’m sorry to hear the [Norman] Transcript is not encouraging the citizens of Norman to confidently look to God and humbly ask Him to fill the lake.â€ â€“ Facebook, 3/27/13

â€œI’m amazed the [Norman] Transcript does not investigate [Mayor Cindy] Rosenthal’s close affiliation with an organization seeking to disarm the US and every US citizen – the US Conference of Mayorsâ€ â€“Facebook, 3/27/13

â€œThey are so very concerned for your safety that they will make sure you are completely unable to defend yourself.â€ â€“Facebook, 3/23/13, regarding an incident where Mr. Kempf was asked by the Norman chief of police not to bring a baseball bat into the Public Safety Candidate Forum

â€œPerhaps we should all submit to a totalitarian dictatorship that will save us from the impending doom of nice weather. There has been no global warming for the last 16 years, despite atmospheric CO2 going from 360 to 400 ppm.â€ â€“Facebook, 3/15/13

â€œ If we figure out a way to dam up the South Canadian, and use it as a reservoir, we could build up a beautiful park all around it as a side benefit.â€ â€“ Response to a 2013 Sierra Club Candidate Survey

â€œDo we not already have bicycle lanes all over the city? Are they not called â€˜streets?â€™â€ â€“Response to a 2013 Sierra Club Candidate Survey

â€œWho are yours?â€ â€“ Response to a 2013 Sierra Club Candidate Survey, the question being: â€œWho are your top five donors?â€

â€œSherman and I are republicans. Rosenthal is a democrat. That should tell you everything.â€ â€“Chamber of Commerce Candidate Forum, in response to a question about water quality. 3/27/13 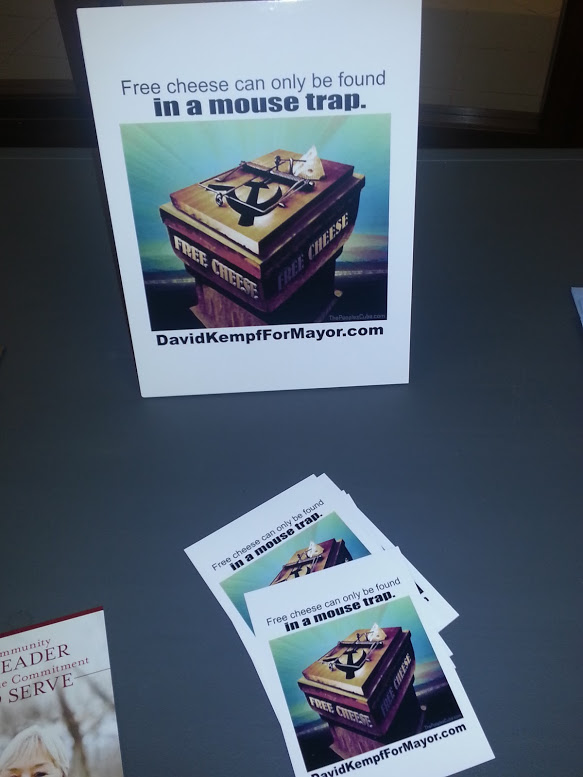 “Well gee golly whiskers, what do you think about that?” – sarcastic Managing Editor notes.

Unlike vanity candidate David Kempf, Tom Sherman really wants to be the mayor of Norman. He wants it so bad, heâ€™ll do just about anything to get it. Anything except articulate an original and rational plan for running the city of Norman, of course. Nope, Tom Shermanâ€™s campaign has one M.O.: take the dirty road and never look back.

It began with his first mailer. With this introduction to potential voters, Sherman intended to look “hard-hitting” by taking an aggressively negative tone.Â  In it, he laid a few big problems at the feet of Mayor Rosenthal:

-The Warren Theatre went to Moore instead of Norman. (Fact: Construction of the Warren Theatre began under a different mayor. And according to Bill Warren, Norman was never even in consideration given the presence of another first-run movie theater already in the city.)

-Mayor Rosenthal tried to sell Normanâ€™s water to Goldsby and now weâ€™re in a water shortage. (Fact: She didnâ€™t. She voted against this idea when she was a city councilwoman.)

When the Norman Transcript debunked this ridiculous mailer just a couple days after it circulated, Mayor Rosenthal asked for an apology. She has yet to receive one. Sherman’s actions do too little to illustrate his commitment to both honesty and solving the issues facing the city of Norman.

Instead of doing the right thing, we got a second mailer. This time, the mailer included a list of former Norman businesses which had either closed or left the city, with the implication being that Mayor Rosenthalâ€™s policies drove those businesses away.

Again, the Norman Transcript stepped forward by contacting the businesses on that list. The paper received confirmation that this group of business owners had not given Sherman permission to use their names to promote his candidacy and that their decision to leave Norman was not based on anti-business policies doled out by City Hall. Needless to say, a lot of those businesses were understandably upset. Itâ€™s also worth noting that this mailer included some top notch editing and graphic design: 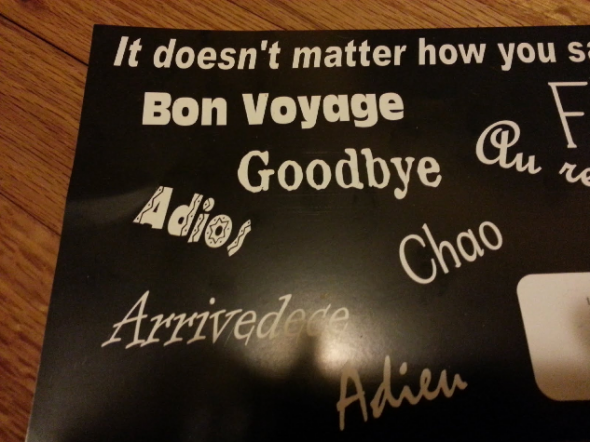 Itâ€™s almost insulting, as if Sherman doesnâ€™t know how easy it is in a small city to get to the unvarnished truth and share it on Facebook. Or maybe heâ€™s just now realizing that, having just deleted dozens of peopleâ€™s questions on his campaignâ€™s Facebook page.

What else is clouding this election cycle with shady dealings? Only the issue of ethics violations within Norman’s City Council. Here’s the deal. City Councilman Tom Kovach is kind of an awesome guy. His politics fit in great with the almost-liberal Central Norman ward he represents, and I salute him for being an openly gay politician in Oklahoma. I certainly voted for him. I even cheered when I saw him shoot down another city councilman who was quoting Davy Crockett to justify defunding a homeless shelter. Imagine my disappointment, then, when I heard that Kovach was being paid $10,000 to be a consultant on Tom Shermanâ€™s campaign. This news came to me the same day Councilman Kovach sent his constituents a mass e-mail accusing Mayor Rosenthal of violating open meetings laws.

Let’s lift the veil a bit, shall we: this is a city councilman accepting money from a mayoral candidate. At the same time he is throwing aspersions at another candidate.Â  BUT he says neither action constitutes an illegal endorsement. Does anyone else notice a conflict of interest?

Luckily for Kovach, heâ€™s the chair of the cityâ€™s oversight committee too. When asked by the Daily Oklahoman about his role as a paid operative of a mayoral candidate, he said: â€œI helped write the ethics ordinance, and thatâ€™s one reason I felt it needed to be rewritten.â€

This isnâ€™t the first time heâ€™s used his office to cast accusations at Rosenthal. In 2009, he brought similar charges of violating the Open Meeting Act against the city. After a full year of intense investigation by the OSBI, City Hall was cleared of all charges, three months after Rosenthal was re-elected. Kovach told The Oklahoman that his â€œhighest obligation is to the people.”

I find his actions to be repellant. There is nothing more despicable than a man who couches his realpolitik in the language of civic duty. If it werenâ€™t for his profound lack of subtlety, Kovach would be downright Machiavellian.

So these are the people trying to keep Rosenthal out of the mayorâ€™s office. Let’s remember despite their shady tactics, no one is saying very much on why it matters that sheâ€™s there to begin with. Well, frankly, sheâ€™s been a fantastic Mayor. Since her election in 2007, despite historic recession and drought, Norman has flourished culturally and economically. Other cities have gone bankrupt and killed their municipal bond ratings, or have laid off public employees and cut back massively on public projects and services. Under Mayor Rosenthalâ€™s leadership, Norman has done none of those things. Our city has maintained a balanced budget with an optimal bond rating and no layoffs, all while expanding massive projects like the Robinson underpass and the Lindsay street expansion.

Many in the business community have fought vigorously to expand Normanâ€™s â€œstrip mallâ€ corridor along I-35, and have had quite a bit of success, including the new development in the TIF district next to the Max Westheimer airport. Mayor Rosenthal hasnâ€™t stood in the way of that, but she has recognized the importance of developing the core of the city rather than focusing on continual sprawl and expansion. Main Street is now as lively as it has ever been in the past, packed with thriving local businesses and restaurants. Itâ€™s no surprise that the organizers of the Norman Music Festival picked Main street as the perfect location for Oklahomaâ€™s greatest annual live music event.

I know so many people who, as they were growing up, left Oklahoma the first chance they got. Whether for political reasons, economic opportunities, or cultural differences, they all had good reasons to go and few reasons to stay. Norman isnâ€™t just creating reasons to stay – itâ€™s giving you a reason to come back. Itâ€™s important that the city maintains its trajectory toward progress and prosperity, and not to let the political circus drag us backwards into mediocrity.

In next Tuesdayâ€™s election, Norman will get to pick between a possibly insane conspiracy theorist, a sleazebag empty suit with a mercenary city councilman, or a responsible and proven leader who encapsulates the ideals that will move Oklahoma politics in a more progressive direction.

That time when councilman Kovach accused the Mayor of violating open meetings laws.Â

Expense reports that prompted inquiry into the politics of Norman’s mayoral race.

That time when businesses refuted Sherman’s claims about their reasons for leaving Norman.

That time when Kovach conveniently overlooked that he was taking money to help Sherman’s campaign.

That time when everyone agreed to run a fair race, but then two of the three candidates forgot about that pledge. 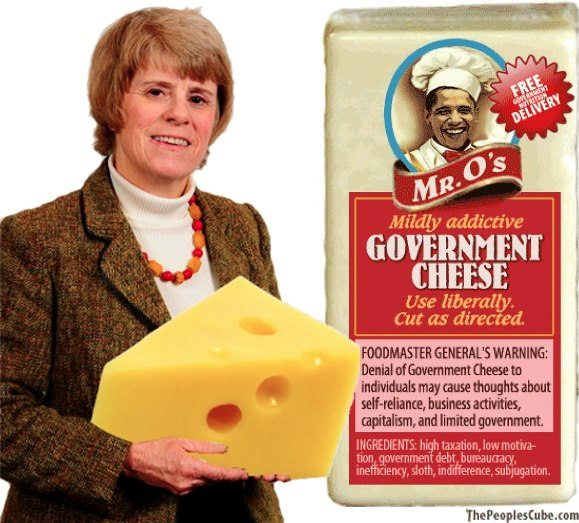 Oh, good. It’s only mildly addictive. I have to say, were I in Norman I’d pair this cheese with a glass of witless white wine and conspiracy crackers. This photo is brought to you by way of David Kempf’s Facebook page, ya’ll. – Sarcastic Managing Editor notes.

One comment to “Norman’s Mayoral Race: Cloudy With A Slice of Cheese”