Editorâ€™s Note: Oklahoma City is spread across a wide grid, and sometimes a gem of a service like Coffyâ€™s CafÃ© gets lost amid the great number of caffeine options we have. Weâ€™ve dined at Coffys, been welcomed to the chill space, the records and even the piano, and we have enjoyed the original recipes. The cafÃ© is having a fundraiser to help them stay in business, as they, like most small labor of love style shops, are having trouble breaking even.

Saturday May 7th from noon to 10 pm Hudgens, Coffy, and the Plaza District community will be attempting just that. Attendees can expect live music, poetry, an hourly raffle that includes gift cards from local business, tattoo artists, private performances by musicians, commissioned art work, photography sessions, and much more. All the proceeds will go to Coffyâ€™s CafÃ©. 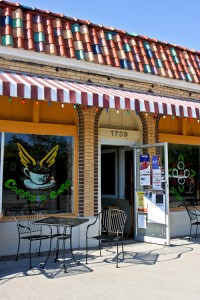 I arrive at Coffyâ€™s Cafe, NW 16th St. in Oklahoma Cityâ€™s Plaza District, and Iâ€™m immediately intrigued by the charming tagline on the window. It reads: â€œSeeking Higher Grounds.â€

The reason Iâ€™m there is that a friend has told me about the cafÃ© and the owner, Coffy, a.k.a Janice Francis-Smith. Prior to arriving, Iâ€™d been informed of the cafÃ©â€™s eclectic record collection, but thatâ€™s not what jumps out at me the moment I cross the threshold. As soon as you walk into this cafÃ© thereâ€™s an enclosed yoga studio off to one side. Iâ€™m not kidding. Suddenly Iâ€™m sensing the tagline is going to encapsulate my whole experience.

As I wait for a chance to talk to Coffy, I wander around her cafÃ©. Thereâ€™s art on the walls, a lending library where Joy Behar and Dean Koontz are wedged next to the likes of Stephen Hawking and Mary Shelly; thereâ€™s a community board â€“ I make note of a anonymous quote: â€œWhat would you attempt if you could not failâ€ â€“ and take in the nifty dÃ©cor. In the King Monkey Lounge, another little cozy nook in the cafÃ©, a nice Washburn guitar is waiting to be played along with a well-kept Wurlitzer piano. I canâ€™t help myself when Iâ€™m around unoccupied pianos, and I play a few pieces from memory, nothing fancy. I notice that sheet music rests atop the piano. Thereâ€™s Bachâ€™s Well-Tempered Clavier, 48 Preludes, and Fugues, and Frank Sinatraâ€™s Anthology. It is then that I realize I havenâ€™t even hit the record collection and Iâ€™m already enjoying this space. Add to that, this places not only sells local art, but also writers and musicians have displays where books and CDs are for sale. Try finding that at Starbucks.

Eventually I wander over to the counter where Tracy Kimball, a recent hire at Coffyâ€™s CafÃ©, is baking. While sheâ€™s rolling up cinnamon rolls, she tells me that the menu is completely gluten-free and vegetarian. Quiet frankly Iâ€™m amazed by the whole process. I donâ€™t have a wheat allergy or Celiacâ€™s disease so I donâ€™t have cause to make gluten-free meals, but it looks nearly effortless as she makes the goodies from scratch. 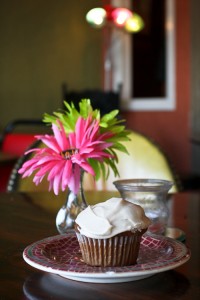 Kimball tells me she moved back to Oklahoma from Michigan. Before she started working at Coffyâ€™s, sheâ€™d been the breakfast manger for Burger King. It was because of family ties and the recession, she decided to return to Oklahoma.

Kimball loves baking, and Coffyâ€™s is a welcome change of pace. But she is a little concerned about the cafÃ©â€™s future. She said the economy in Oklahoma seemed to be doing better than in Michigan, but according to the books lately, business has been slow at Coffyâ€™s compared to the previous year.

I try not to get in the way as she preps for lunch, and eventually Iâ€™m flipping through the albums as I wait. I find Bowie sandwiched next to The Dave Burbeck Quartet. And thereâ€™s a lot of The Dave Burbeck Quartet. I find Roberta Flackâ€™s First Take next to Gershwinâ€™s Rhapsody in Blue. There are so many choices â€“ what to choose â€“ Gil Scott-Heronâ€™s Pieces of a Man or The Eagles The Long Run? I finally settle on The Flaming Lips At War with Mystics. I ask Kimball if itâ€™s O.K. for me to play with the sound system. Sheâ€™s says itâ€™s cool and I drop the needle on â€œThe Yeah, Yeah, Yeah Song.â€ I feel itâ€™s relevant given the cafÃ©s uncertain situation and the effort to save it.

And thatâ€™s really why Iâ€™m waiting around. I want to ask Coffy about her name, why she opened her own business, how things have been, and I want to know who all is responsible for the â€œHelp Save Coffyâ€™s CafÃ©â€ event set for May 7th.

As we sit at a table, Coffy tells me she got her nickname from her Slam Poetry sessions. She originally worked as a journalist for many local news outlets before landing a job at The Journal Record. She said two years ago in 2009, with nothing but blind optimism and money from savings and her 401 K, she quit her job as a journalist on the capital beat, and opened the cafÃ© with her sister, Denise Francis. Her sister later moved, but it was a combination of her sisterâ€™s love of baking and a mutual friendâ€™s diagnosis of Celiacâ€™s disease that lead the sisters to develop their gluten-free recipes.

Itâ€™s clear they thought about what they wanted and went after it. When I ask about the anonymous quote from earlier, â€œWhat would you attempt if you could not fail,â€ Coffy laughs and says it was one of the first items posted in the cafÃ©. And really the story of how this place came together fits the quote. The piano was a lucky find. A church down the street happened to be selling it. Her husband, Kirk Smith, is handy. He built the partitions, tables, and shelves for her. Heâ€™s also responsible for the tea selection, while sheâ€™s the one who selects the coffee. She said she likes Prima CafÃ© and hopes to eventually have the roaster make a signature blend that carries her label. Even friends and acquaintances got in on the process by contributing records, labor, and dÃ©cor.

In turn, Coffyâ€™s became a collective space for people to enjoy. With an eye for inclusiveness, all kinds of people have been welcome. The yoga studio has an instructor who takes donations for sessions. Coffy said if someone didnâ€™t have money one week for a class, then theyâ€™d bring some the following week. People are giving and supportive. Poetry groups congregate here, as do musicians. She said that it isnâ€™t unusual for someone to pick up the guitar, sit out in front of the cafÃ©, and play. In the afternoons itâ€™s not unusual to see middle school and high school aged kids come hang out.

But the last few months have been difficult. Coffy found that she was making just under what she needed to stay solvent as business. 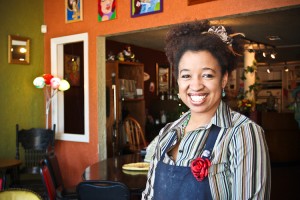 â€œYou do your projections,â€ Coffy said. â€œAnd you know how much you need to make, and itâ€™s like hereâ€™s your target. But weâ€™ve been just under target for a long time. And after awhile that catches up to you. And itâ€™s so frustrating because youâ€™re close. Then we got to the year-end with taxes, and a lot of things coming to a head at the same time. I looked at the numbers and realized, â€˜I canâ€™t do this.â€™ So I thought it was time to call it good and close.â€

A regular patron of the cafÃ© and friend, Jennifer Hudgens, heard the same news from Coffy. It was then that Hudgens told Coffy she would not let the cafÃ© go down without a fight.

But to understand this declaration, you have to know that Hudgens and Coffy go back four years. At that time Hudgens was coming back to open mic poetry and Coffy was supportive, as Hudgens puts it, â€œinstrumental.â€ So when Coffy opened her cafÃ©, Hudgens was happy to have a place to write and organize poetry sessions. 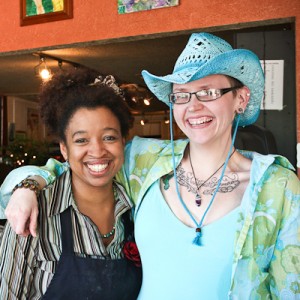 So with a mission in mind, Hudgens quickly organized â€œHelp Save Coffyâ€™s CafÃ©.â€ Coffy said Hudgens went to work typing away at her netbook, and within an hour had set up the event, attracted donations, and scheduled five performances.

As for Hudgens it is a matter of raising awareness and support. When people heard that Coffyâ€™s CafÃ© might close, she said the community rallied.

â€œShe is one of the most genuinely good people I’ve come into contact with,â€ Hudgens said. â€œHer shop is the heart of The Plaza District, and when anyone hears of her possibly closing, people rushed to help. I’ve had folks that haven’t even been in the shop offer to donate art and goods for her fundraiser. She’s been part of the arts community through her work with poetry, IAO, and now her own shop that has wonderful live music, poetry, and art shows. I am an avid believer that it takes a community willing to show love and support for the arts. And I feel so very humbled that people are doing that exact thing. Love and community are vital to keeping the arts alive. Oklahoma City is growing, especially the arts community, and when we have places like Coffy’s CafÃ©, it makes a huge difference in keeping that spirit alive.â€

2 comments to “A Day at Coffy’s Cafe”