Editor’s note: We asked Jordan Bayhylle of DEEERPEOPLE to write about SXSW 2012 from the musician’s point of view. To keep perspective fresh, we’ve asked James Nghiem, comedian, indie filmmaker, and drummer for The Nghiems, to tell us about this year’s nexus of indie talent. His band also won best music video at Norman Music Festival 5 for their stop-motion “Dum Dum Dah Dah.”

â€œThis one right here. Itâ€™s important,â€ Zon says as she straightens out her deck of tarot cards on the table. Weâ€™re in the back of Othelloâ€™s, taking a break from the stand-up comedy in the front while she tries to divine my future. â€œSome people call it the Tower card. I call it the Thunderbolt.â€

Zon is calm, but I canâ€™t tell if she even believes what sheâ€™s saying or if this is merely fun for her. The card itself is in desperate need of color as depicts two people jumping off an ominous tower; it’s bisected by a thunderbolt.

â€œIt doesnâ€™t have to be bad. It just means youâ€™re gonna take a fall. Just try to land on your feet.â€

â€œNo itâ€™s not. Just Remember. Youâ€™re gonna fall, but know youâ€™ll land on your feet. Youâ€™ll be all right.â€

When SXSW looms, its shadow stretches far beyond Texas past Oklahoma and deeper still into the Midwest. Itâ€™s coming and everybody who loves music knows it. Theyâ€™ve felt it for months, watching from a far, waiting for their favorite bands to confirm; making preparations and itineraries in hopes that theyâ€™ll navigate through the coming sonic riot with their bodies intact and a story to tell. This is SXSW.

Itâ€™s Wednesday night in Norman, Oklahoma and I have Austin on the mind. On Monday, Iâ€™ll pack my drumsticks and leave for festival. Iâ€™ve never been one to buy into the â€œKeep Austin Weirdâ€ hype, but having lived in Norman for almost ten years, I canâ€™t deny that I need a change of scenery even if itâ€™s only for a week.

But being weird has never been Normanâ€™s problem. Whenever things got boring here, something would be done to shake things up. I remember seeing a group of crusty punks constructing homemade stilts before prancing through unsuspecting neighborhoods and declaring themselves a circus.

â€œThis guy smells like an animal,â€ they shouted, pointing to the crustiest among them.

I caught a whiff of him. They were right.

Normanâ€™s definitely not boring, but it’s still small for a city. Itâ€™s like a Noahâ€™s Ark of culture. It has everything I like from the people to the art, but in biblically-limited quantities. Lately when I’ve been walking around at midnight, Iâ€™m starting to feel like Iâ€™ve seen everything on this boat.

Tonightâ€™s a typical night. James Draper, local hero and perennial funny man, suggests we go to a house party a little bit up the road, past the bars. Osi, a fairly new comedian with nothing to do now that the show has ended, concurs. He votes we move that way.

As we walk I do my best to avoid potholes, looking at the ground carefully every fifteen feet. Around this time last year, I rolled my ankle by stepping into a pothole during a late night drunk walk. The ankle affected me for months. When I think about last yearâ€™s Norman Music Festival, I can still feel the ache of limping my drum set through a crowd of drunks to the stage, limping through seven songs, and then limping all the way back home. With SXSW on the horizon and feeling a bit cursed, I hope to avoid stumbling into the same pattern.

From what I remember, SXSW is a lot of walking, a lot of trying to see bands I like, and then a lot of disappointment after missing them. That might not sound very festive, but itâ€™s not rehashing past experiences that Iâ€™m excited about. Itâ€™s the potential of epic nights to be had, which is SXSWâ€™s true allure. And potential is enough for me.

The three of us make it to the house around 1:30 in the morning. I can hear faint hip-hop coming from the crack in the door and thereâ€™s a drunk girl talking loudly on the porch. These are all familiar sights in Norman on a Wednesday. We walk five steps up the porch to the door.

â€œWho are you fuckers?â€ the girl says.

â€œWhat about you?â€ she says, pointing to me.

â€œGet out of here!â€ she exclaims as if this were sitcom and she were a drunken Elaine Benes, shoving me hard as she speaks.

I slip backwards off the steps on the porch, momentum carrying me to the ground, but eerily I remain calm, rolling backwards until I land with my two feet under me, and my palm pressed against the concrete to break my fall.

â€œI think I jacked my wrist,â€ I say, feeling like last yearâ€™s idiot who walked into a pothole and could barely play his drums without wincing.

Begrudgingly, I walk with her underneath some light, and she grabs both of my palms for comparison.

â€œHmmm. The blood vessels in your right palm and wrist are inflamed and swollen.â€

No shit. â€œInteresting. I wonder what could have caused this, doc.â€

â€œCan you move your fingers?â€

The owner of the house walks up to the two of us.

â€œYou good Mr. Nghiem,â€ he says, flashing me his deformed knuckles. â€œSee. Your hands donâ€™t look as bad as mine. I socked my friend the other day. Hurts like a bitch.â€

I test out my wrist and stretch it out. Heâ€™s right. Itâ€™s not that bad. I feel a little irritated, but ultimately relieved as I recall the words from the amateur psychic back at the bar.

Youâ€™re gonna fall, but know youâ€™ll land on your feet. Youâ€™ll be all right. 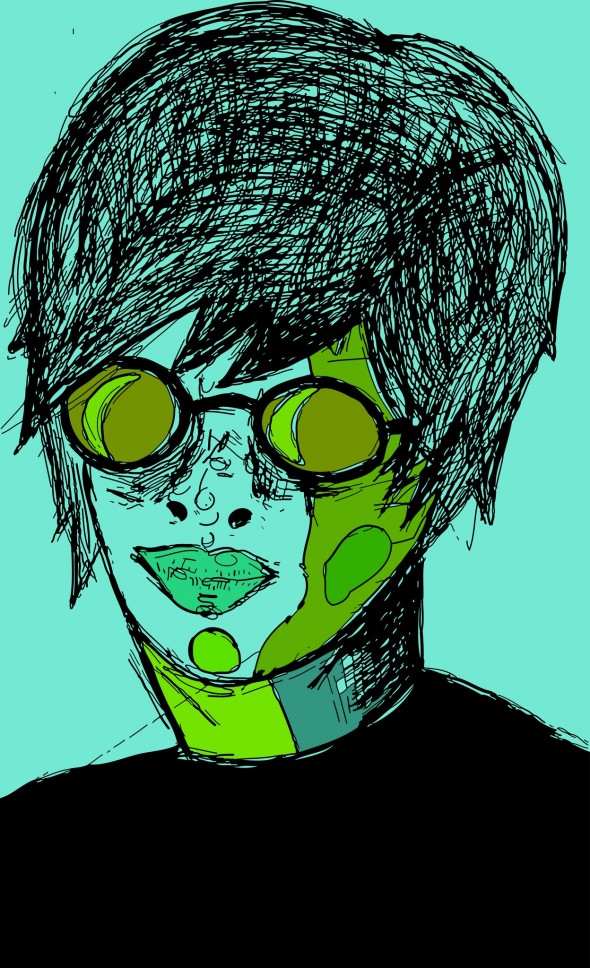 Illustration of James Nghiem by Andy Nghiem. His glasses really are that yellow.