This is not my first time writing about Foxygen. However, if this is the first you’ve seen anything of them, get thee to your nearest music dispensary and dose up on this whirlwind of 60s and 70s sonic ephemera. The album you’ll be wanting is: “We Are The 21st Ambassadors of Peace and Magic.” Really soak it up this weekend. Why? Because on Monday March 11th they’ll be playing the Opolis with Unknown Mortal Orchestra and Wampire.

Alright let’s break down the sonic ingredients of this dope pill. Are there side effects? Yeah, lil’ bit. So the first track, “In the Darkness,” channels the Beatles circa “Sgt. Pepper’s Lonely Hearts Club Band.” There are more than a few quirky similarities, but it’s a good fit as it begins the listener’s journey to heartbreak and back again. The second track, “No Destruction,” has a lonely and wandering vibe as the bass line pulls you along from scenes on subway in Brooklyn to driving around in San Francisco. Over all it is light fare as pianos and harmonicas make it folksy when compared to the third track “Blue Mountain,” which is equal parts bluesy, soulful, and optimistic considering the lyrical content. It is heavy on the organs and in the distortion on the backing vocals. “Blue Mountain,” which might be a favorite of mine, also has this weirdly upbeat percussive push and pull. The band’s ability to effortlessly change tempo speaks to their ability to fuse many pop elements, think Sly and the Family Stone with a distorted bass line to “Everyday People” and Elvis’s “Suspicious Minds” drum section yet more piano-driven, into something new. While “San Fransico” reminds me of watching a stylized Wes Anderson movie, it’s probably the xylophones. “Bowling Trophies” conjures “The Big Lebowski” and other cinematic visual references. Perhaps it is no surprise to hear later in “Oh Yeah,” which is like funky school house rock meets the Supremes, lyrics like “Oh, yeah. Oh, I got the movies and a discotheque inside my mind all the time. All the night.”Â  Meanwhile the album’s eponymous track “We Are The 21st Century Ambassadors of Peace and Magic” reminds me of The Who’s “Who Are You” if the Doors had gotten their hands on it and added organs and bluesier guitars and bass to it. The last song “Oh No 2” reminds me of David Bowie’s Ziggy Stardust or Aladdin Sane taking a psychedelic trip to the Beatles’ Moonbase before the song morphs from a space journey freakout into piano torchlight singer via Elvis-land style. Yeah, it’s a graceful transition.Â  The execution needed to pull ambient psych rock down into the realm of a gospel lover’s croon relies heavily on the piano riff. But honestly, whatever the method and quality of transformation in each of the songs, the result is astounding.

Side effects of “We Art The 21st Century Ambassador’s of Peace and Magic” include: wondering endlessly how each element is used to play into the other. Musing on what other songs and groups were referenced that you might have missed. Xylophone riffs being stuck in your head. Wanting to harmonize along to the chorus. And not paying attention to other people while you get lost in this cleverly-crafted nostalgic blanket of sound. And finally: wanting to go album hunting through record stores to find more of these and other sounds. You will get addicted if you weren’t before, so listen with caution.

I would wager that the same nostalgic impulses which drove the Chillwave crowd (Washed Out, Toro y Moi and others) to breathe new life into long forgotten 80s synth, must be the same kind of force at work with Foxygen’s Sam France andÂ Jonathan Rado.Â  The duo told Pitchfork they don’t really connect to modern music as well as these old soundscapes.Â  If you’ve read their interview and others, you’re likely to get the sense that they are bored with what other bands are doing or more specifically who these other bands are drawing their inspiration from these days.

All said, the music that sticks with me most is usually both edgy and ridiculous. It’s why I love a lot of Brainfeeder’s artists, including founder and owner Flying Lotus, but also TOKiMONSTA, Daedalus, and The Gaslamp Killer. They are morphing music in such a way that both is both cheeky and innovative. Speaking of cheekiness, this is probably why I loved Air’s “Sexy Boy” too. If we’re going to go all retrospective here, I can’t leave that French duo out. It bears mentioning in that same Pitchfork interview Rado says their first records sounded like Flaming Lips and Beck, but if a bunch of ADD kids got experimental. Think a plethora of songs that are indulgent with the overdubs. They’ve also drawn some criticism for sounding like a “throwback” band. But here’s the deal: I kind of don’t care that they aren’t M83, The National, or Beachhouse, because as Rado points out: “…there are cultural imprints you can’t explain. I have connections to these things. Maybe we’re not intentionally trying to make something original.”

Along those lines, I think the worst thing we can do to ourselves is to believe that it is possible to be original. When you consider the myriad of influences that inform our worldview and words that infuse our ever evolving lexicon, there is no way to escape the past. But you can rearrange it and filter it through your own perspective. The sonic trip that is “We Are The 21st Century Ambassadors of Peace and Magic” isn’t something that I think anyone can just mimic. There are personal elements at play between France and Rado that would be hard to imitate.

So the other key component that makes these musicians resonate for me? The ability to execute their zany ideas. There are so many ways for songs like these to end in failure, like bad movie remakes do, yet the reason I think Foxygen works so well is that they don’t seem to take themselves too seriously. That is to say unlike super groups you never hear from anymore, mainly because the Spice Girls, 98 Degrees, and O-Town were always commercial and less arts-driven, I don’t think it’s about the money for France and Rado when I hear lyrics like, “You can’t be funny if you want to make money.” So they take the kinds of liberties other groups might not, and play around and the experiment. It’s like the sonic equivalent of going to an antique store and selecting some of the best elements of design from the 60s and 70s and pairing them in such a way that a whole new picture has evolved. Which I do appreciate their efforts, because it was assembled with

design and filtered through a whole new lens of personal experience and expression.

You can catch them Monday night at the Opolis if you’re down to hear them play live. 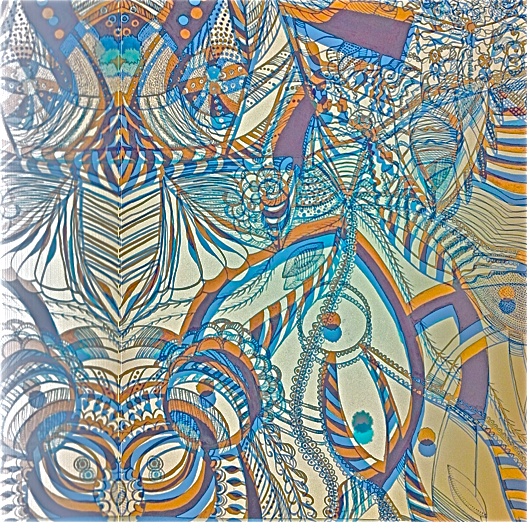 For this listening session I doodled with turquoise ink and a fountain pen because “We Are The 21st Century Ambassadors of Peace and Magic” is like a “fount of familiar sounds.” And because it is a trippy album, and because the album art features a red triangle over an eye with lines coming out of it, I filtered the original to make one image red and then overlapped the two and mirrored a section of it. I really wish I had a pair of 3-D glasses right now.