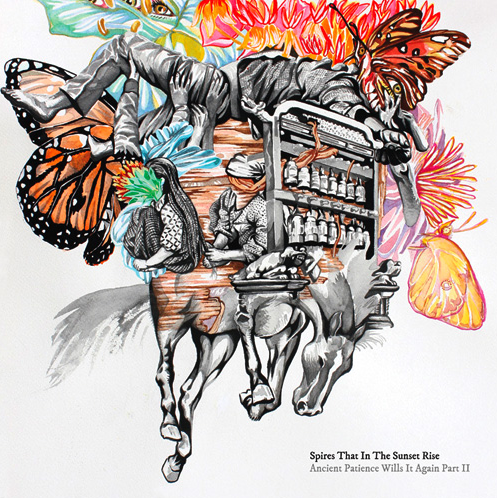 Freaky psych art with a healthy appreciation for white space has a way of catching my eye.

Here’s what we know. If you go to SXSW there’s a good chance a sweaty man dressed as a condom will shove flyers into your hand, as another street team member walks up and slaps an iPhone app sticker on your back.Â  But you can skip the clusterfuck that is the nexus of indie music and trade show by catching SXSW bands right here at home.Â  We can guarantee that the Individual Artists of Oklahoma will not aggressively market all over you.

This Wednesday Spires That In The Sunset Rise will play at IAO Gallery, which is located at 706 W Sheridan Ave, Oklahoma City on historic Film Row.

Members of Spires That In The Sunset Rise include Kathleen Baird and Taralie Peterson. They’re from Chicago, IL.

So how do they sound?

They’re heavy on the strings from pizzicato to layered string arrangements. This duo has a dark sensibility that haunts their soundscape. Their song “Child of the Snow” pairs ghostly vocals with abrasive and pensive instrumentals. It’s like if PJ Harvey circa “White Chalk” used more strings and less piano. Up front, if you don’t like discordant piano, you’ll likely find these string arrangements like nails on a chalkboard, but if you have an appreciation for scary movie soundtracks, their creaky and sharp dissonance, which punctuates many of their songs, might strike the right chord for you.

Other notes about this band?

Time Magazine name-dropped them as a band to watch at SXSW this year.

Check the IAO Facebook event for more information on Spires That In The Sunset Rise and others playing that.