I have made a mixtape, mix cd, or mp3 playlist every month for the last 8 years. It’s like a musical diary. In that time I have noticed a few key elements of a great mixtape. These are just guidelines, so don’t get all angry at me for contradicting your favorite method. I’ve even listed a few exceptions where I’ve found it’s better to deviate from the general rule. Anyway, there is no wrong or right way to make a mixtape. Yes, I will be referring to them as mixtapes throughout this article even though almost no one uses cassettes anymore. Why? Because “mixtape” just sounds cooler than “mix cd” or “MP3 playlist,” plus it makes me feel all nostalgic for the days of physical media.

With that out of the way, here is my primer on the fine art of making a mixtape.

Unless you are doing a themed mixtape (and we will get to those in a moment) you should never use more than one song from any individual artist. This serves two purposes: first, it lets you get the maximum number of different artists on to a single mixtape, which is important because generally one of the main purposes of these things is to expose your friends to new music. It also keeps the set from feeling stale or repetitive.

EXCEPTION: Two part songs or suites can be placed on the same mixtape, provided that they transition seamlessly.

2. Have a Sense of Purpose.

Sure, you could just take your 20 most played songs on iTunes and make a mixtape out of that, but you might as well give up all control and generate one of iTunes’ so-called “Genius Mixes,”Â  Unlike the music robot in your pocket, you have some autonomy and can think for yourself, so act like it. You should ask yourself at the outset “why am I spending time putting this together?” In my case I make mixes for myself that reflect my mood at that moment, both because I enjoy the process and because it’s interesting to reflect on how my taste has changed and evolved over time. Occasionally I make them for other people. Or I make them to encapsulate a certain genre of music or time period. And sometimes I make them because I want to get a bunch of good songs that share an intangible element compiled into one spot. I guess the message is this: “Put some real human thought into this.” Trust me, it will make the end result better.

A common mistake people make is that they confuse making a mixtape for someone with making a mixtape about them. This is a good way to give someone a collection of creepy songs they don’t like. If you don’t know someone well enough to have some general idea about their musical taste, you probably should hold off on the mixtapes for a while. As you get to know someone better, you’ll eventually learn more about what they like and what they hate and you can adjust accordingly.

EXCEPTION: If someone specifically requests a collection of music that *you* like, you should give it to them. Try to be broad enough that there will probably be at least one or two songs they might dig.

Ideally you should be able to listen to your completed mixtape in one sitting. Since the advent of the CD-R, there is a temptation to use the entire 72 minutes, and MP3s just make the problem worse. Beginning to end, you should limit the run time to one hour or less. This generally gives you room for 12 to 14 normal length tracks, which is almost exactly the length of a standard LP. If you have a 90 minute cassette, by all means use up the entire 90 minutes, but allow each 45 minute side to be a distinct entity.

You know how all stories have a beginning, middle, and end? Mixtapes should as well. There are three pivotal positions that you need to pay attention to. The first song is the most important. You have to hook the listener without making the next song sound too weak. It should be catchy and powerful but open ended. Don’t start with a 7 minute epic. You also don’t want the first song to be your strongest, because it will make everything that comes after it seem kind of lame. As with any diverse group of songs there will always be a variety of styles, moods, tempos, etc. and because you want the collection to flow well, you will end up grouping songs that are similar in one way or another together. So the next important song you need to pay close attention to is what I identify as “the transition song.” If you want to avoid jarring transitions, you need to find a song that either has elements of both groups of songs or that acts as a satisfying coda for the first grouping. This generally comes near the middle of the tape, as you might expect. On a cassette, it would be either the first song of side two or the last song on side one. On a CD or playlist, it’s usually track 6 or 7. Obviously the third super important position on a mixtape is the last song. It functions as closing remarks for the entire set. You want to find a song that somehow ties everything together in a satisfying package, or that at least gives you a sense of finality. Extremely short songs are great here, and if you want to use your 7 minute epic, those work well in this spot too. I generally go with very quiet, acoustic tracks for the last track, but that’s just my preference.

When you make enough of these, just putting together a group of good songs feels kind of boring. If this happens to you, there are things you can do to challenge yourself. For example, you could pick an incredibly upbeat song to be the first track and then choose a deeply, deeply depressing song as the final track all the while trying to connect them seamlessly. You could do a set where every track is from a different country, or all songs are from the same year but are completely different genres.

My last four suggestions are kind of self explanatory.

Because sharing is caring, and the mixtape is a courtship ritual for a reason. You can learn a lot about someone by what music they listen to.

Don’t get stuck in your own little rut and never leave it. The joy of discovery is part of the reason to do this in the first place. And with the Internet on the scene you can find mixtapes offered by artists you may already listen to such as Bradford Cox or other samplings assembled by music aficionados found on websites like Bandcamp, Soundcloud, and Spotify. I won’t even bother to link the last one. Spotify is good for keeping track of what your friends are digging these days and to share playlists, but unlike Bandcamp and Soundcloud, you aren’t going to come across a lot of nascent indie and underground material. Speaking of which, you can just go to Google and type in “mixtape” and find a shit ton of free streaming and downloading options. Check out The Obsessive Compulsive Music Disorder’s site if you need a place to start.

If you don’t like the post office or can’t afford postage, you can bring them to us in person. We are generally here between 10 a.m. and 3:00 p.m. Monday-Friday, unless we are out on assignment or eating. Drop us a line first at okcdotnet@gmail.com to make sure we’re in and when you drop it off you’re welcome to a cup of whatever Elemental Coffee we’re brewing that day. [True story: I once traded a mixtape for a mug of coffee at Grey Owl. As far as I know, the tape is still there. The other wonderful thing about trading a physical copy? Doodling art all over it!- Helen] 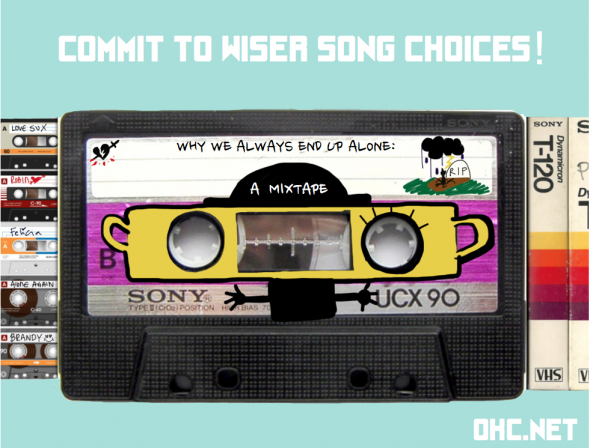 4 comments to “Mixtape Pro Tips from an Obsessive Curator”