The unemployment rate in Oklahoma is currently 5%.

The unemployment rate of blind and visually impaired people hovers around 68%.

Despite gains since the passage of the Americans with Disabilities act in 1993, it’s still harder for the blind to find permanent employment than almost any other group in America.

“Employers are required to provide reasonable accommodations, but most employers can’t imagine that a blind person could do the sort of work they need.” said Lauren Branch, President and CEO of NewView Oklahoma, “But then, most of them probably wouldn’t imagine that blind people can do the work we do here every day.” 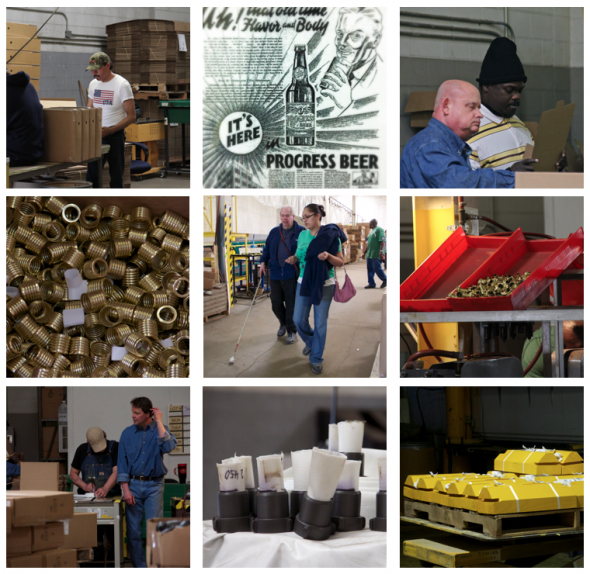 Sitting just southwest of downtown, the working class Metro Park neighborhood has been home over the years to the people who quite literally built Oklahoma City. Towering over the neighborhood is the Art Deco Progress Brewery building. “Oklahoma Makes Progress, and Progress Makes Beer” their ad copy proclaimed. But beer hasn’t been made here since the 1970s. Although the factory floor still buzzes with activity today. NewView, previously known as The League For the Blind, employs over 100 blind and visually impaired people, manufacturing items as diverse as First Aid kits, aircraft wheel chocks (the things you put behind their wheels to keep them from rolling away) , “abandon ship” rations and vinyl shower curtains for the military, and fire hoses for the Forest Service.

“When we have a bad fire season, we can barely make these fast enough.” said Thomas Larson, NewView’s Communications Director. He said nearly all of the work is performed by blind and visually impaired workers.

The most striking element of the manufacturing operation is how normal it is. If you were dropped into it without knowing where you were, you would see little evidence that there was anything different about this operation than any number of other small manufacturing operations around the country. Since they mostly fill government contracts, NewView has been insulated from the worst of the economic downturn, but a different crisis looms on the horizon.

“We’re all sort of holding our breath to see what happens with the sequester.” Branch said. “Departments have already been tightening their belts, and this will only make it worse. Luckily most of what we make are things they can’t do without. The forest service isn’t going to run out of fires to fight.” 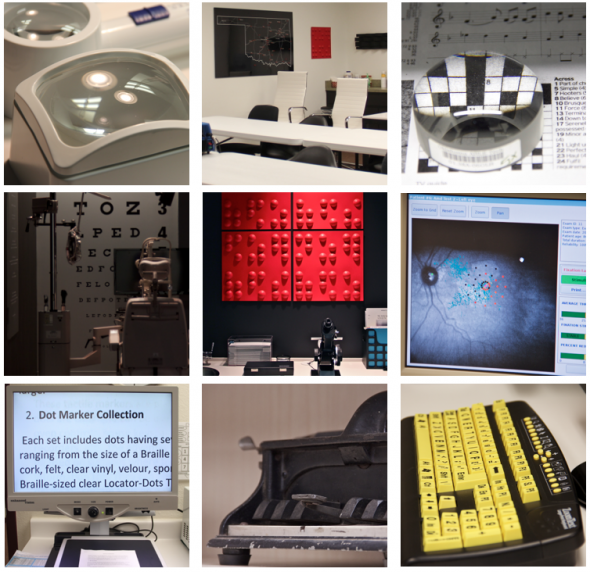 If NewView were only a workshop for blind and visually impaired craftsmen, it would be an interesting personal interest story, but the real impact of NewView in the community lies in the services they provide. “At some point, physicians get to where they have to tell their patients that there is nothing else they can do for them, and that’s when they refer them to us,” Larson said.

NewView specializes in providing assistance to those with low vision needs, from rehabilitation and mobility training to rowing teams and veterans groups to summer camps for visually impaired children. The message of NewView is that life doesn’t have to end with blindness, only change.

The NewView Limited Vision Clinic sits in a nondescript strip mall in Northwest OKC in the shadow of the construction cranes and affluence of the surrounding Nichols Hills neighborhood. This clinic is far more remarkable than it’s mundane exterior would suggest. The first thing you notice as you enter is the amount of attention paid to the physical environment of the clinic, designed by architect and local visionary Rand Elliot. Everything in the space is calibrated for maximum accessibility, from the width of the doorways to the high contrast art on the walls.

At the low vision clinic, patients undergo a detailed optometric exam by their in-house physician.Â After the low vision exam, patients receive home visits from an occupational therapist who can suggest lighting, magnification, and other adaptive devices and strategies to help the client live independently. “Home based therapy is an important part of what we do” said Cathy Holden, Director of Rehabilitation at the clinic. “It’s much more effective, not just because the patient is more comfortable in their home, but also because you can identify issues that you might not even think of in a clinical setting.”

As the only comprehensive agency dealing with vision impairment in Oklahoma, NewView hopes to bring clinics like the one in Oklahoma City to all regions of the state, beginning with Tulsa in the next year or so. “I would love to have one in every corner of the state” said Holden.

The challenges blind and visually impaired people face in Oklahoma are serious and they aren’t going away any time soon. “I wish I could say that people in Oklahoma City face fewer challenges than those in rural areas, but because of how the city is built and the lack of public transit, that isn’t the case.” said Holden. Finding money to keep the agency in operation is also a full time task, made easier by local philanthropy and public support. NewView never turns a patient away for financial reasons.

NewView can’t cure blindness, but they are doing their best to help people with limited vision not feel like they need a cure. To that end, they will continue to partner with those organizations and resources that aid them in this endeavor. One such example was Individual Artists of Oklahoma “Out of Sight” art show held a couple of years ago.

Sandy Wright, NewView Oklahoma’s Grants Coordinator, said “IAO approached NewView Oklahoma to partner and provide consulting as to making a show accessible to the visually impaired.Â  Michael Hoeffner at Elliott & Associates spearheaded the exhibit, along with Paul Medina.Â  Michael conferred with us prior to writing the artist prospectus to get a better understanding of what blind people â€œseeâ€ and the types of artwork that they would best be able to enjoy.”

Wrights says they offered interested artists the opporunity to visit the facility and learn more about blindness. They also produced Braille gallery cards and artist statements for the artwork. Â  She said the artist response was very strong. 40 artists total ended up exhibiting in the show with forms ranging in acrylic painting, sculpture, collage, furniture.

“In order to exhibit, the artist had to make their piece accessible through touch, smell, sound and use of contrast, light and form.” Wright said. “The exhibit opening was huge and well attended, including a number of blind and visually impaired individuals.Â  We took a number of our clients and employees to the exhibit and for many it was their firstÂ  trip to an art gallery.Â  As I understand, a number of pieces were sold and there was interest in doing another partnership at some point. ”

It also bears mentioning that NewView Oklahoma and the Oklahoma City Museum of Art will offer a month long art classes for blind and visually impaired children and youth. Students will explore a variety of art media and learn techniques to create their own finished artwork to take home. Some of the courses are in clay and mixed media. To learn more about these classes, employment opportunities, and other community resources check out NewView Oklahoma online or connect with on Facebook or Twitter. 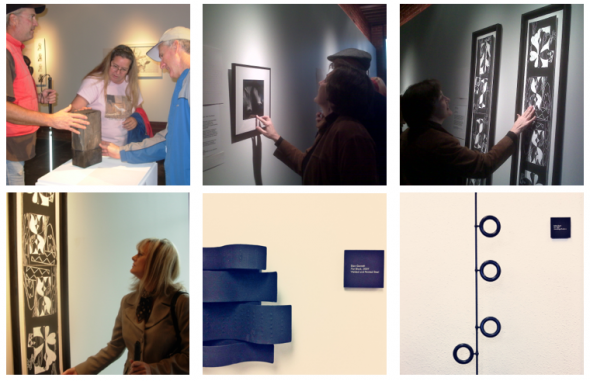 The first four pictures are of the “Out of Sight” art show at IAO Gallery. Image courtesy of NewView Oklahoma. The last two are of a metal sculpture by Dan Garrett and a mixed media sculpture by Helen Grant that were a part of the “Out of Sight” art show and later donated to NewView Oklahoma’s Low Vision Clinic where they are currently on display.

One comment to “NewView Oklahoma is an Agency With a Vision”