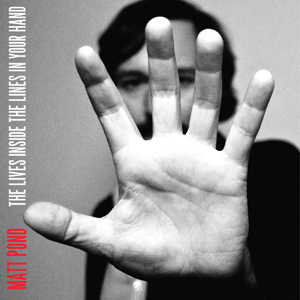 Matt Pond The Lives Inside The Lines Of Your Hand

Matt Pond makes the sort of music that I describe as Canada Rock. It’s not because Pond is Canadian, he isn’t,  but because his music is big-hearted, friendly, and utterly inoffensive, just like our neighbor to the north. Pond has been releasing music for the past decade and a half under the moniker of Matt Pond, PA with an ever rotating cast of supporting players. His newest record is his first without the “PA” following his name, but it’s basically the same thing as his last dozen records, which is to say that it’s soothing indie troubadour fare with a slight chamber pop lilt.

I haven’t been following Pond’s career closely, but I remember liking a couple of his records years ago. I listened to those again in conjunction with this review, and the most obvious difference between his new record and his earlier output is that, listening to “The Lives Inside The Lines Of Your Hand” feels like a smoothed down and denatured version of the same basic formula. This may be a bit unfair; Pond’s flavor of baroque indie pop has been imitated widely, by artists as diverse as Regina Spektor and Jack Johnson, which may account for the overwhelming feeling of familiarity on this album. Artists can’t be held responsible for the quality of their imitators. It’s not that this is an entirely unremarkable album.  “Hole In My Heart” and “When The Moon Brings The Silver,” evoke the best of 80s power pop, and the title track manages to push through the crystal clear gloss of over-production to make a genuine impact. My complaint is that this terrain has been tread before, and better, by any number of acts, including Matt Pond himself.

Lack of artistic growth doesn’t always bother me. Bruce Springsteen could keep putting out working class anthems and Pavement could keep writing quirky lo-fi pop forever as far as I’m concerned. What gets me is that Matt Pond, after so many records, hasn’t ventured to experiment at all, and has drifted more and more into radio-friendly territory over time. I don’t think I am the ideal audience for this record. This is college rock of the highest order, but I’m not in college anymore. I can imagine hearing this in a girls dorm room, and in this context his album makes perfect sense.

As Abe Lincoln is reputed to have said, “People who like this sort of thing, will find this the sort of thing they like.”

Watch Matt Pond talk about “The Lives Inside The Lines of Your Hand” if you’re curious about his creative process.