Where: NW 23rd Street from Western to Robinson

Cost: Free to attend, but bring some money for food and drinks.

No doubt if you follow us on 365 Things to do in OKC you’ve seen posts about the Open Streets OKC event coming up on Sunday March 30th. Here’s a little more background about the event.

Open Streets OKC is a little bit of a street fair, festival, activities event, foodie thing, and a whole lot of emphasis on health living and community building.

It might be surprising to some, but Ryan Baker, Special Programs Officer for Transportation and Planning with Association of Central Oklahoma Governments (AGOG), said 40% of car trips are under 2 miles. We all know that physical activity is key to leading a healthier life, but choosing to walk more isn’t made any easier when the transportation options in your city, your neighborhood, your work place are set up to favor one mode of transportation over another.

Enter Open Streets OKC. According their website, “Open Streets OKC is an opportunity to experience a new use of public space: a temporary reclamation of our streets for non-motorized activity. Open Streets OKC will create a long enough stretch of safe road that kids and adults can (at least for a few hours) get a good workout by jogging or cycling, moving between nodes of activity along the way.”

What are these “nodes of activity”?

Sufficed to say, you can expect to see activities from a rain gutter regatta, which will test your lung capacity since you’ll race boat in these rain gutters with only a drinking straw to power it, to the Regional Food Bankâ€™s bicycle blender, where they put their pedaling to good use blending delicious smoothies. Other activities, but not all, include: Tai Chi movements, inflatable soccer goals for a little street soccer action, skateboarding, seed bombs, kids bicycle helmet fitting and give away (for adults Spokies will be doing bike demos and a helmet giveaways too), there’s also a childrenâ€™s moon bounce and festival games including bean bag toss, ring toss and bowling.

The list goes on. But are you seeing a picture here? This could be the norm in a lot of business districts and neighborhoods. And quite frankly studies are showing that more and more of the public, especially in the millennial demographic, are in favor of mass transportation and other alternatives to car travel, like biking and walking. But it won’t just be millenials using these systems, Pew Research Center reports that 10,000 Baby Boomers will turn 65 everyday for the next 19 years. Income doesn’t usually go up for this group the older they get, and assuming they retire at 65, most are looking at fixed-incomes. Given that wealth inequality in the United States is widening, affordable transportation options are going to be important for this demographic too.

Simply put, get out to Open Streets OKC and join the movement of fellow Oklahomans who realize that change is coming. Speaking of that, I’m not a native Oklahoman. I’m a transplant, so I didn’t grow up here in 80s and 90s. From what I understand, those who did live in this area in that time said an event like this wouldn’t have been seen in the city. After 1995 that changed some. And no one with eyes can deny that events like Open Streets OKC are growing in popularity. Baker said they’ve been approached by other business districts in OKC to hold an Open Streets OKC event.

So, an event that promotes health, community, and benefits small business too? I’m thinking you’d have to be a curmudgeonly misanthrope to hate on this. Also food trucks will be at this shin dig.

Obviously the businesses of Uptown 23rd Street are welcoming this event with open arms. But for those of you who aren’t participating because life happens, this is the alternate route for driving around the area during Open Streets OKC from 10 a.m. to 6 p.m. 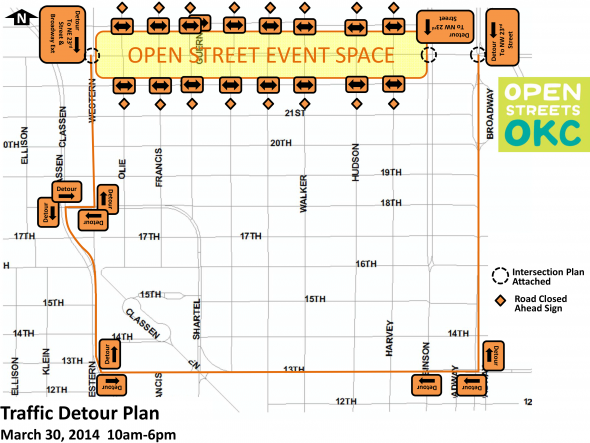 If you have to commute, as I’ll have to do since I work up here but live elsewhere, there is a parking option. They’ll have shuttles running to ferry you from the parking lots to the event. And because it bears repeating, here’s what they said on their website:

“We recognize the irony of planning for parking for an event celebrating active transportation. That being said, we have options should you need to drive to Open Streets OKC:

Should you decide to go rogue and take your chances on parking in the surrounding neighborhoods, please be very respectful of the fact that people live there, and may need access to their driveways, etc. The neighborhoods have been very supportive and we donâ€™t want to upset them. There will also likely be more people and pets of all ages on the neighborhood streets on Open Streets Day, walking, biking, skateboarding, etc, so drive slowly and carefully around our neighborhoods.”