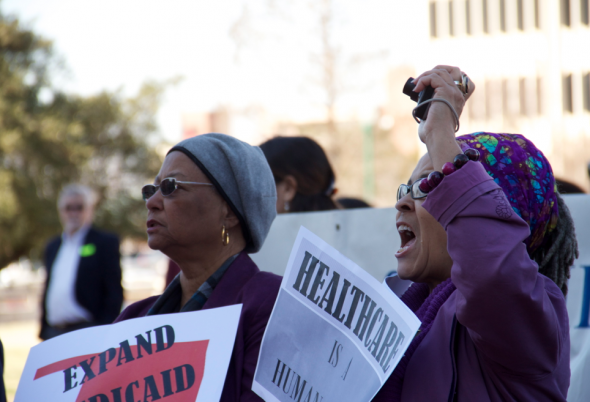 People from Tulsa, Oklahoma City and other parts of the state rally at the Capitol Tuesday afternoon to protest Governor Fallin’s decision to not expand on Medicaid benefits.

The crumbling facade of the Oklahoma State Capitol building is an apt metaphor for the state of public health in Oklahoma. Just as our friends in the legislature would rather work in a building that is literally collapsing around them then spend a dime of public money to fix it, they are content to watch thousands 0f Oklahomans suffer and die for want of health services rather than accept federal funds to help them. This is not only absurd and cruel, it is unnecessary. The much maligned Affordable Care Act, or Obamacare as it is popularly known, provides money for an expansion of Medicaid that would help to insure hundreds of thousands of uninsured working poor in Oklahoma. The current Medicaid system helps the truly indigent, but it leaves a lot of hard working people in the unenviable position of working hard every single day, sometimes at several jobs, and still not being able to afford or obtain medical coverage for themselves or their children.

The poisonous national political climate has made it uncomfortable for Republicans to sign-on to something that would clearly benefit plenty of people in their states. Governor Fallin, already unpopular with the extreme right wing of her party, may be seeking to fend off a possible primary challenge with this move. I don’t envy her position, but I wish she would show some backbone and stand up for what I’m sure she knows deep down is right.

Out at the Capitol today, a broad cross section of Oklahomans from every corner of the state came together to make the forceful argument to our elected leaders that, with Oklahoma consistently coming in near the bottom of any list of states based on health habits and outcomes, we cannot afford to turn down this money. The Governor has argued that the cost is unsustainable for the state, but this is a red herring. Consider for a moment the economic benefit of increased productivity from healthier workers, and of more jobs in health services. To suggest that the modest cost to Oklahoma 8 years from now is so onerous that we need to ignore the very real and very major positive impact the Medicaid expansion could have today is odd to say the least. It also bears asking why, if our state finances are so tight, we should also seek to eliminate the state income tax as Fallin has so famously tried to do. It seems to me that the Governor is trying to both enjoy her piece of austerity cake and have it too.

If our elected representatives really believe that accepting any federal money at all amounts to tyranny, they should say as much and start tearing up the checks they regularly cash. If instead they only object to government helping the poor, they should explain to us why subsidies for our billion dollar energy sector are more essential than subsidies for the least fortunate among us. Our friends on the right see Medicare and Medicaid as an unsustainable boondoggle, a handout to the lazy and undeserving. One local right wing think-tanker called Medicaid “the worst health plan in America.” I would dispute this. The worst health plan in America is the “Don’t Get Sick” plan, which is what most average working families currently have. The ER is for emergencies, not primary care, but it has become the first, second, and final line of defense against illness for far too many fellow citizens.

I was born with the degenerative eye disease Kerataconus. By the time I was 27 I was legally blind in both eyes. Because I married up and was able to get on my wife’s good public employee health plan, I was able to get a double cornea transplant and am able to see and work today. If I had not gotten married, neither my current status (self-employed) or my status at the time (cook and student) would have allowed me to get the operations I needed, which cost upwards of $30,000 per eye. I would probably be on disability for the rest of my life, which I guarantee you would eventually total more than the cost to the taxpayer had I been able to get the surgeries I needed through Medicaid. Plenty of our neighbors are in similar straits. As the old saying goes, an ounce of prevention is worth a pound of cure, but our political leaders would rather stand on principal against the poor and sick even if it costs more in the end. This is lunacy at its purest.

As conservative governors like Arizona Governor Jan Brewer and Ohio Governor John Kaisich have recognized, the duty of an elected representative is to promote the best interests of their constituents. I would like Mary Fallin to explain to Oklahomans how it is in their best interest to pass up what is essentially a large refund of money already paid into Medicaid that could at the very least reduce the burden on our overtaxed state health care system and reduce the suffering of hard-working yet low-income Oklahomans. We should make Governor Fallin and the politicians in the legislature aware that we won’t stand for it. 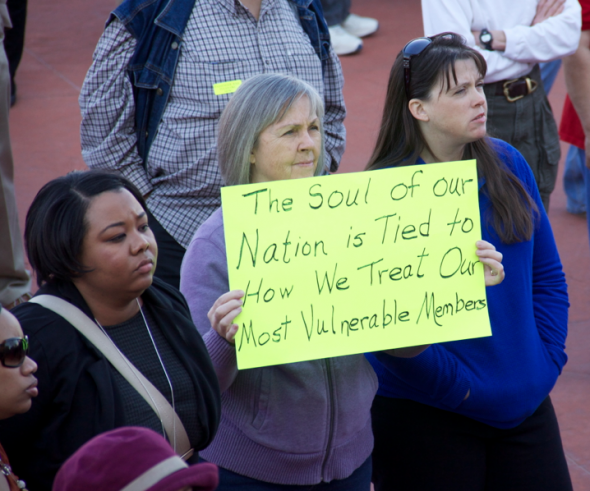 Many political signs were at this rally, but this one caught our eyes.