I’ve got to hand it to whomever is handling the promotion of Passion Pit’s Gossamer, be it their label French Kiss or someone else. Between NPR, Pitchfork, Soundplay, and the free-while-supplies-last 2-song promo that’s floating around music stores, such as Guestroom Records, it would be hard to miss Passion Pit’s sophomore album. Although, to be frank, when it comes to NPR’s music coverage lately, I can’t say that I was really paying attention to their updates as every review reads like it’s the best stuff ever, thus I missed catching Passion Pit’sÂ GossamerÂ on NPR’s “First Listen” because of my growing indifference for their starry-eyed take on everything. Aw, shucks!

So what really drew my attention toÂ Gossamer,Â of all things, was a computer game featuring the song “Take A Walk.” The production of this game is the combined effort of Pitchfork’s Soundplay and Panchinko Pictures. Other people were involved, such as fiscal sponsors, and you can watch their advertising should you play the game, but since okc.net doesn’t get any kickbacks from a certain computer company, I don’t see the point in giving them any extra publicity. At any rate, the song kicks off the action as you learn to pace your hopping and floating.Â  Is that a metaphor for the album? Who knows, but your ultimate objective is to eat as many stars and bubbles possible. Doing so also causes your little beetle to evolve into a frog, then a chicken, and so on. Essentially if you’re bored this is a good way to kill some time, like say when you’re waiting for an e-mail from one of your co-workers so you can finish the other half of a project or whatever. 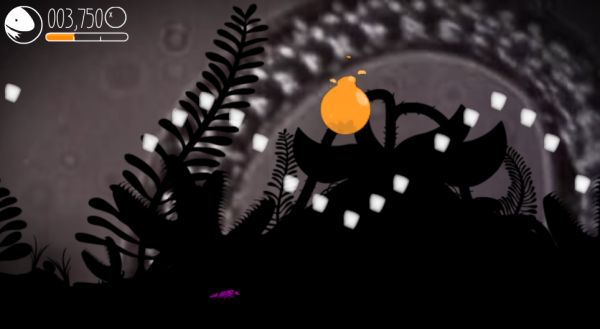 Pop up there little beetle! Know that points were lost in the pursuit of this screen capture.

Honestly, Gossamer is infectious indie eletro-pop. Those synth arrangements are so incredibly hooky, but the real catch is the dark subject matter. These aren’t jubilant empty-headed songs of inconsequential origin. It’s best to state now that Michael Angelakos, lead singer and mastermind, struggles with bipolar disorder and all that goes along with it.Â  Lyrically Gossamer is about neurosis, human frailty, and flat out dysfunction as layered in sweet, sweet damn near celebratory music. This might seem like a strange juxtaposition, but it’s probably pretty apt that it all plays out this way considering the source of Angelakos’ struggle. As a listener, the cognitive dissonance had in combining foreboding lyrics with manic upbeat melodies functions as a sort of reprieve from the severity of depression found throughout the entire album.

Angelakos sings in a falsetto range consistently from track to track, although this is not to ill effect. GossamerÂ is ear candy, sure, but I do think it’s about deep-seated psychological pressures and emotional honesty more than anything else. First there’s “Take A Walk,” which clearly has everything to do with a man trying to live up to his responsibilities as a husband and father during the current economic recession, and then immediately following the first track is “I’ll Be Alright.” The song’s opening lines ask “Can you remember ever having any fun?/ ‘Cause when all is said and done/I always believed we were/But now I’m not so sure” and then the skies continue to darken even if the music seems bright and shimmery.Â  If anything, the music gives these broody lyrics a bit of silver lining.

“Carried Away” reminds me of The Magnetic Fields, it’s quite snarky, but you really need to listen closely to catch it. This is true for the majority of the album too. “Constant Conversations” is the electro-pop approximation of a R&B song. There’s plenty of lusty tension as coupled with deliberately languid beats. It would only be too easy to dismiss “Constant Conversations” as a bit of sexy fluff were it not so lyrically weighty in its tale of alcohol abuse, co-dependence, and depression. There’s a lot of these vignettes on Gossamer, but around track 7, “On My Way,” the music and lyrics feel like they come close to matching mood. There’s a sort of weary resignation yet hopeful outlook that a messy love between two people can be rekindled if they only try hard enough to make it so. This story pairs well as it is set to Angelakos’ pleading falsetto as pensive strings arrangements eventually soar into a crescendo.

According to Pitchfork’s Feature Playlist interview, “He [Michael Angelakos] wrote and performed the album on his own, sharing co-production duties as well; while it’s certainly more expansive than its predecessor, Angelakos spends much of the album looking inward, focusing hard on his own personal traumas, of which there are quite a few. Depression, substance abuse, suicide, and familial strife are all present, topped off with mistrust towards love and others’ intentions. There’s hope, too, but it’s open-ended.” 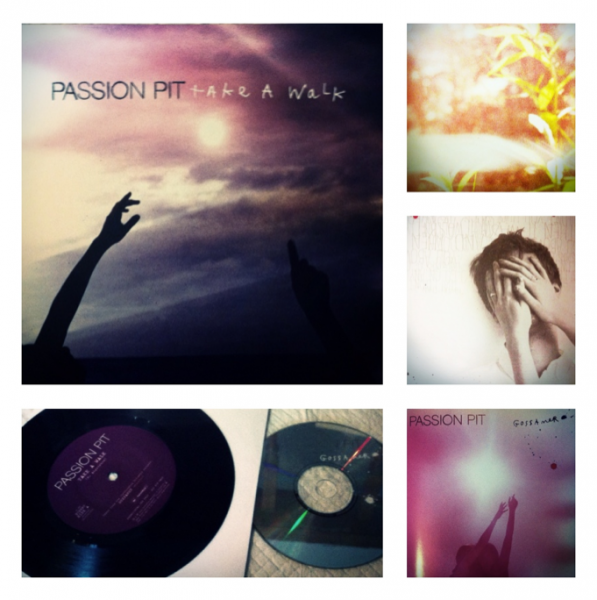 Some of the goodies to be found with the CD and the free-while-supplies-last Promo. A-side is “Take A Walk” and B-side is “Almost There.” Yeah, yeah, yeah, so I used Hipstamatic and Frametastic to put this together.

With that in mind, it’s not hard to see how songs like “On My Way” fit into the context of the whole album. “Hideaway,” “Two Veils To Hide My Face,” “Love is Greed,”Â  and “It’s Not My Fault I’m Happy” are all good and have notable qualities. But one of the best songs is the last one, “Where We Belong.” I feel a little bad for really liking what is essentially a song about Angelakos’ attempted suicide, and after reading some interviews where Angelakos expresses a pessimistic outlook on his lifespan, I kind of worry for the guy. All said, it does end hopefully. It’s best to listen for yourself.

While I greatly enjoyed Gossamer, be forewarned, this is not bubblegum electro-pop no matter what it sounds like. On the flip side, I don’t doubt some might think the lyrics come off as indulgent in their self-loathing just as there will be others who probably gloss over everything because they’re only attracted to the bombast of the music, but if you’re really listening there’s great depth in the constant fight to not succumb to that which would destroy us, again, echoed in lyrics that proclaim: “All theseÂ demons, I can beat them,”Â  which seems like a good thought to end on.