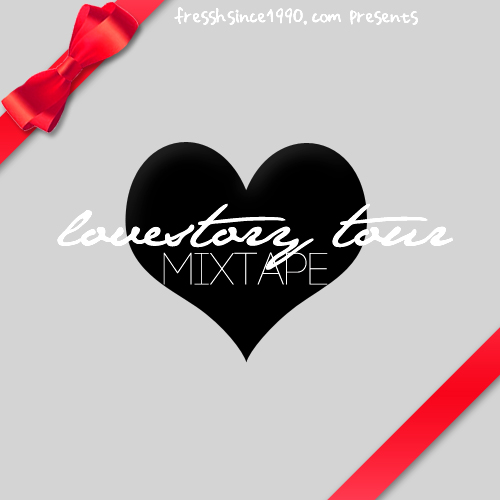 At okc.net we love all kinds of music, so it was decided that we’d write about a hip-hop mixtape called Lovestory Tour. This Friday writer Najah Amatullah will cover the OKC concert date at The Conservatory.

So who is responsible for the Lovestory tour mixtape?

Shannon Moham, who writes fresshsince1990.com, and Jabee Williams, OKC-based rapper, put together the mixtape. It features songs from rappers who are are on the permanent line-up, which includes: Shawn Chrystopher, El Prez, Sean Falyon, Raven Sorvino, and Hollywood Floss. Jabee said he’s both collaborated and done shows with the artists from Los Angeles and Atlanta, and that while he is booked for shows outside of Oklahoma, he will not be on The Lovestory tour throughout its duration. Even so, he’s got a few songs on this mixtape as well.

1. One of my Homies – Shawn Chrystopher

A few thoughts on the Lovestory tour mixtape:

Some artists that I liked were Hollywood Floss, Jabee, and El Prez. My taste in hip-hop skews towards striving-for-something-better type lyrics like the ones found on “Dream Killer” by Hollywood Floss and less towards the “I got diamonds on my chain, diamonds on my dick, smoking pounds of weed, smoking pounds of weed…” lyrics found on “Diamonds” by Shawn Chrystopher, which would be a comical song if it wasn’t delivered like it’s some kind of enviable lifestyle. I think that kind of goal is too superficial when it comes to mapping out one’s personal aspirations. However, this isn’t to say I didn’t like Chrystopher’s song about racial tensions in the romantic relationship described in “BlackandWhite.” I have an aversion to “bitches and hoes” and “playa” rap, but this particular song transcends some of my dislike for calling women “bitch” as it details the issues surrounding the couple. In the end, it’s really about two people with their own personal demons trying to find a meaningful connection. Another one of Chrystopher’s songs that had some weight to it was “One of my Homies.”

Raven Sorvino is the only female rapper in the bunch, but her lyrics and musical style are on par with her tour mates. Jabee’s contributions are pretty good too. I especially liked “Beautiful Day.” El Prez had another song that caught my attention called “LoveKills.” Overall, there are some standouts on this mixtape and likely there is something for everyone. You can download it here.

So, who is responsible for The Lovestory Tour?

That would be Shawn Chrystopher.

Moham said Chrystopher released a new mixtape titled Lovestory and then organized a tour to promote it so that people might have the chance to experience a variety of hip-hop artists from all over the country. She and Jabee helped to book the show at The Conservatory, 8911 N. Western, on Friday August 24th.Â  Tickets are $7 and doors open at 7 p.m. The show starts at 8 p.m. In addition to the featured artists that night, there will be a few local rappers performing as well: Beetyman, L.T.Z. GLC the Team, and Resista.Â  There’s also a “Meet and Greet” taking place at Fuzzy’s Taco Shop in Bricktown, which starts at 4 p.m.

“People should definitely come out and see the show.” Moham said, “Even those who are not familiar with some of these artists or even hip-hop music should come. You might hear or see something you like that you never would have otherwise.” 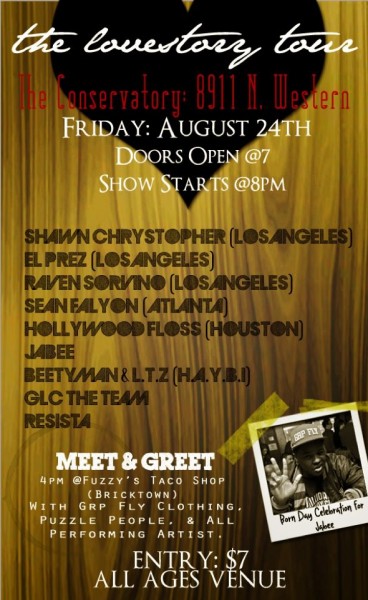