The poems that tend to interest me most are often witty, observational, contemplative, humorous, confessional, fictional, vivid, or some blend of these elements and more. With that in mind, these are all qualities found in Lauren Zuniga’s poetry. Full disclosure: I’ve seen her perform on several occasions. But even if I hadn’t had this prior experience, her phrasing keeps the cadence as lively on the page as it does during a performance.

It is likely that many progressives across the country may be familiar with at least one poem published in this book. A ready candidate for recognition is â€œTo The Oklahoma Law Makers Who Passed SB 1878 Requiring Women To Receive an Ultrasound Prior To An Abortion.â€ This poem garnered the attention of Moveon.org and continues to be widely promoted. But there are a few poems that have also had some notable circulation such asÂ  â€œTo The Oklahoma Progressives Plotting Mass Exodus,â€ and â€œWomen Behind Bars.â€ OKC.NET recently filmed a previously unrecorded poem entitled “Boston Marriage.”

The poems that comprise Zuniga’s new collection The Smell of Good Mud are stylistically cohesive, and her imagery is brimming with life. I had to ask Zuniga about the title of her book as I wasnâ€™t sure how it applied to the entire collection. Sure, there are a lot of earthy, metaphors about the messiness of love, life, and everything in between, but I had a feeling there was more to it than that.

Zuniga said the title is derived from a line in Clarissa Pinkola Estesâ€™s book â€œWomen Who Run With The Wolves“:

“She is ideas, feelings, urges and memory. She has been lost and half forgotten for a long, long time. She is the source, the light, the night, the dark, and daybreak. She is the smell of good mud and the back leg of the fox. The birds, which tell us secrets, belong to her. She is the voice that says, ‘This way, this way’.”

Given the style and subject matter found in Zunigaâ€™s poetry, it seems perfectly natural that she would draw inspiration from this passage.Â  Her poems often lead you on a journey where youâ€™re never quite sure what youâ€™ll encounter next be it politics, the people she’s encountered, motherhood, her commitment to writing and performing poetry, community, and the nature of sexuality. 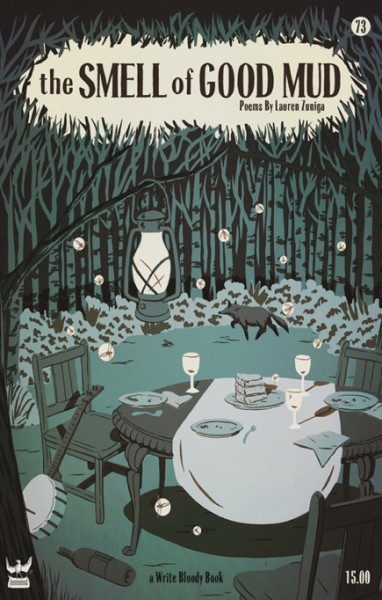 Illustrator Gary Musgrave said Write Bloody Publishing requested a fox be drawn on the bookâ€™s cover. I think its placement is perfect. It’s as if the viewer is being teased into following that fox into the forest.

The majority of Zuniga’s poems appealed to me for various reasons. â€œTally of Queerdom [In No Particular Order]â€ has a line that I find wryly amusing. Most would consider themselves happiest with the security promised in a monogamous marriage. Although, it’s always good to know where you stand, monogamous or not. She writes:

â€œI am more terrified of monogamy/commitment/entrapment than I am of lesbian/bisexual/wild woman/queer. Wedding rings look like handcuffs. I do not want a circle drive or a master bedroom. I donâ€™t care what the neighbors thinkâ€¦â€

Although as a woman with two rings on her left hand, one a white gold wedding band and the other a silver claddagh, I do have to admit that I love drumming on random objects while listening to them clink along with the beat. That, or fist bumping my rings with my husband’s as we simultaneously say, “Wonder Twins powers activate!” But thatâ€™s the lovely thing about this book, thereâ€™s no judgment against the ‘norm,’ whatever that is, as this is about Zuniga expressing her individuality and making no excuses for who she is either. There’s also a sense of searching for acceptance too, because while she isn’t interested in a traditional marriage, she expresses outrage with a society intent on legislating all relationships with one brand of religion. Even so, Zuniga doesnâ€™t bash her neighbors as I’m pretty sure she recommends tracking down and hugging some Republican friends at one point. Her plea to progressives: “Show them how to love someone you don’t understand.” So there are many poems about the value of acceptance and diversity.

â€œStormchaser,â€ written for her sister Kait, is a prime example. In this poem readers get a glimpse into Zuniga’s family dynamics. Sisterly love is offered even if the familial ties are sometimes just as tempestuous as anything else encountered in the world at large.Â  Another humorous but sincere poem is “Prayer for the Snobby.” In this one Zuniga admits to judging people for their bad taste in hair styles, their lack of knowledge about a trivial fact important to only a select few, or their general awkwardness, but in turn she asks for “the kind of humility that casually fashions mountains and oceans,” so that she may come to know “…The quiet smirk of redwoods. The silent hum of stars.”

Some of Zuniga’s poetry is clearly autobiographical, but there are a few poems that blend elements of fact and fiction. This presentation reminds me of another poet who once lived and taught in Oklahoma. Ai, whose book “Vice” had been gifted to me over a decade ago, used a first person narrative to examine morality in America. Ai’s characters related fictional accounts even if the historical events and people she used were real. I mention Ai’s poetic style because when OKC.NET interviewed Zuniga at her home this past May, I noticed she had a copy of this book too. “Women Behind Bars” isn’t exactly like one of Ai’s character monologues in part because Zuniga doesn’t shy away from recounting her past encounters with the law. However, half-way through “Women Behind Bars” Zuniga adopts Sylvia’s persona. Sylvia’s life history is a composite of commonalities shared by the types of disadvantaged women who end up serving time in Oklahoma’s prison system. Oklahoma incarcerates more women per capita than anywhere else in United States. These two life histories, one factual and one fictional, highlight inequities within the justice system and catalogs contributing factors that have led to Oklahoma’s troubling statistics.

With Zunigaâ€™s permission to reproduce a poem in full, I choose to end with â€œCircle Drive.” It is not the last poem listed in the book, but it has a collection of motifs that consistently appear in her work, for example there is: love, acceptance, morality, sexuality, the governmentâ€™s role in people’s lives, and relational ties between families and communities.

My neighbor just came out to her husband. They have been married for 15 years and have three daughters. She has been in love with the same woman for five years but never once touched her skin. Never had the courage to explore the terrain of her sex. Terrified of what the neighbors would think.

Her neighbors are a rowdy house of queer women. They light bonfires and erect giant maypoles to celebrate the fertility of spring. They occasionally kiss each other. They sleep on the roof. They want a chicken coop but roosters are noisy and illegal in the city. The neighbors might call the code enforcers.

His parents are retired and enjoy gardening and horseback riding. Recently, the mother has been wearing leopard print aprons and lace panties when she cooks. His father likes to have sex with her against the stove. She wants to scream until her grandmotherâ€™s china shatters in the cabinet. She doesnâ€™t. Terrified of what the neighbors will think.

One last addition, if you noticed that all of Zuniga’s “Top 10 Favorite Books” happened to be the exact ones listed in Write Bloody Publishing’s 2012 line up, it’s because of an editing error. No one’s perfect, that’s why we have editions. Still I was amused and intrigued, so I asked if she’d like to list her “Top 10 Favorite Books.” Zuniga said “IN THIS EXACT MOMENTâ€ they are:

Feminism is for Everybody- Bell Hooks

Live for a Living- Buddy Wakefield