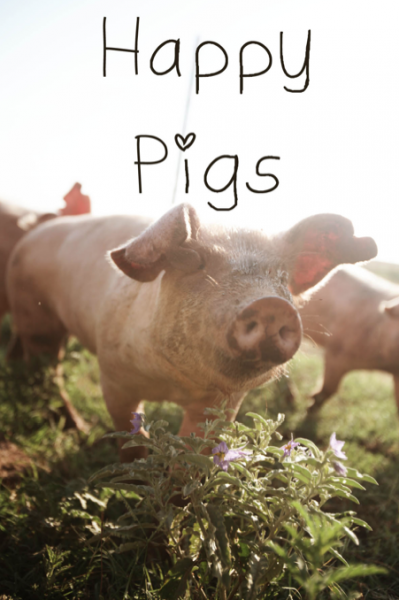 That they were. Photo provided by Samantha Lamb.

Last July, if you had visited Early Bird Acres at any given point, you would have surely seen me checking on my three Chester pigs at various times of day. They would have been happily submerged in one of their many mud pits or scratching themselves upon one of the abundant hickory trees that abided in that particular pasture. I fondly named these three hams Monroe, Holcomb, and Stanley.

These three little pigs were not my first attempt at raising fine quality pork. I’ve finished out two other heritage breed pigs, and successfully completed a full year of rotational grazing. Rotational grazing is when you let the animals on your farm graze across a section of acreage to reach max potential in land use and yield. In the past I’ve let cows use the land, followed by the pigs, then my chickens have a go at the same plot turning over everything the cows and pigs have left behind, then I’ve planted a lovely garden in the same spot and after it’s been harvested I sow a mix of sweet grass and alfalfa. Then the cycle starts all over again. Besides all the technical and stewardship talk, I really did love my pigs. Of course I use the past tense, since I ate them and sold various cuts to ecologically-minded families. Goodness gracious was I happy with the results. Delicious pork finished out on a diet of black walnuts, pumpkins, alfalfa, and prairie pasture.

It is with this in mind, that I would like to create for you, readers, two scenes featuring two people working and living in the same location, but at two different times in history. So imagine if you will a newly built redwood-framed tin barn. On one side of the barn is a corral made of fallen oaks and elm, it shelters four cream-laden Holstein milking cows. On another side of the barn is a smaller corral that leads out to a bit of pastureland, and there abides three large black American Mulefoot sows, and one large boar of the same breed. The year is 1913 and my Great Grandmother is yelling into the pasture: â€œRoot hog, or die!!!â€.

This old phrase would have commonly been used by many a settler of the South. It would have been peppered in many Civil War ballads in a folk sense, and upon the lips of families that attained a hog fresh off the boat. The pig, if possessed by a wagon family on their way to the great wide West, would be lead along the trail by children, a halter made of rope tied around its small form.Â  Then when it was larger it would be tethered to a supply cart or loaded into a make shift crate upon one of the wagons. The hog was then expected to root out its own food amid the rolling hills and thick forests as the families rested for the evening. The phrase was as sure as the dawn back in these days. If the pig did not root, it would most certainly perish. Some of my favorite wagon trains images are the ones that picture a half-grown pig tethered with rope as it stood amongst the frontiersmen. Crouched down next to this happy hog, this future bacon, is usually a group of children who must sustain their cuddly pet needs.

Now, flash forward nearly 100 years. Before you is the same tin barn, only well worn but still very sturdy. The corral’s fencing retains a few lingering pieces of the original oak and elm, but it has also been fortified with cattle panels. Instead of the Holstein bossies roaming the barn, I have chosen Jersey cows to roam inside this enclosure. Then, look into the pasture and you will see the very same breed of black American Mulefoot pigs roaming the land, but today before them stands a braided, dirt-covered meadow girl who would more likely yell into the distance, after a nearly finished picnic with her animals,â€œEat this leftover apple pie, or I will be very sad!!!”

Yes, times have changed, but hearts have not.

Passion for the land and good stewardship are core qualities in a successful farmer. This is what my ancestors practiced and what I strive for, and in my three years of being a farmer I have brought this life of farming full circle in a few notable ways. Unlike my great grandparents, I am not starting from scratch. However I restored their farm, unkempt and overgrown from years of neglect, back to its former glory. My Great-Grandmother Annieâ€™s words might be different, but our hearts I believe are the same. I just tend to be more Disney-like with my farming techniques.

So, I will leave you with some perspective on the phrase “Root hog, or die!” – but just know a piece of apple pie, like thoughtful acts of kindness, doesnâ€™t hurt either. 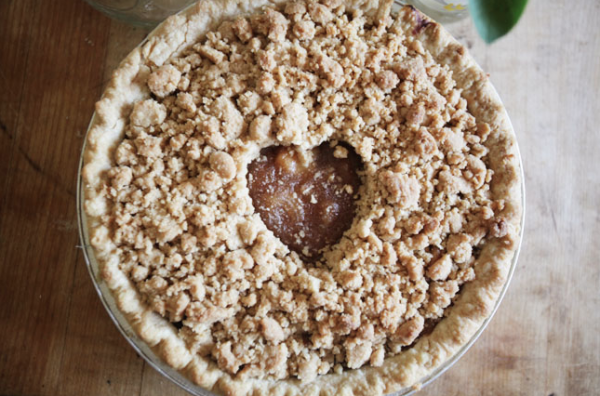