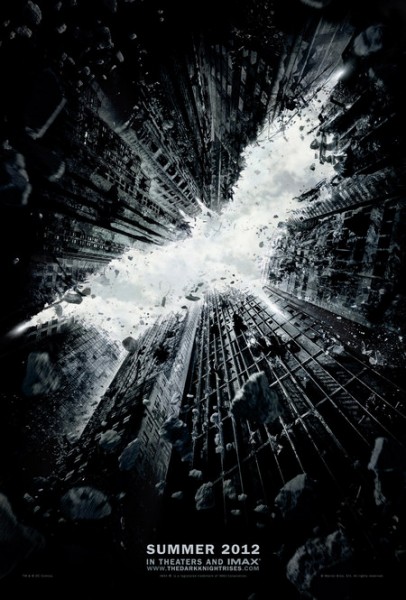 As of Friday, there is only one week until the most anticipated movie of the last ten years is released: The Dark Knight Rises. After the massive hype that led up to its predecessor in 2008 (and the the subsequent yes-it-really-is-that-good meta-hype about Heath Ledger‘s legendary take on the Joker), The Dark Knight Rises has a lot to live up to. Contrast this with 2005’s Batman Begins, which had so little to live up to in the wake of Joel Schumacher’s Gotham City-themed train wrecks that it really didn’t have to be much better than mediocre for fans to embrace it.

Talk about overkill; Christopher Nolan‘s two entries in the Batman franchise are probably the two best comic book movies ever, and The Dark Knight is arguably the best thriller of the 2000’s. In honor of the conclusion to Christian Bale’s time as Bruce Wayne, I wanted to take a look at how we got here by remembering all the past film incarnations of BatmanÂ leading up to the current film trilogy.

Batman (1989), dir. Tim Burton- The first time the Caped Crusader had been taken seriously on-screen, Batman (1989) had everything a fan of the comics would want in a Batman movie-excitement, a dark, brooding tone, cool gadgets, a great cast…it seems ironic now that the movie that wrote the book on how to make a comic book movie was made a a director who vocally dislikes comic books. 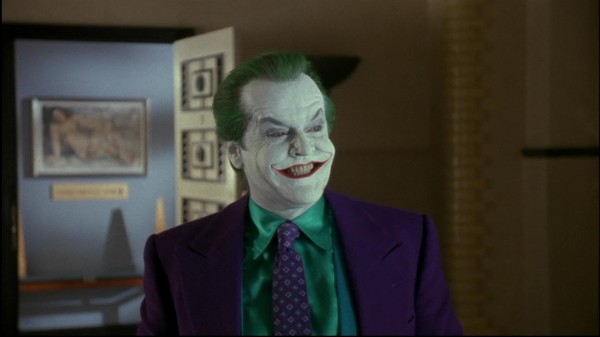 Who thought back in 1989 that, thanks to botox, every trophy wife over the age of 35 would one day look like this?

Michael Keaton’s casting was initially very controversial, with Warner Bros. upset that someone with more experience as an action star wasn’t cast as Batman. Keaton’s wry humor as Bruce Wayne and monotone seriousness as the Dark Knight won audiences and critics, over, though, and Batman was ultimately a huge success.

Something interesting about the watching the film now is how slow it is; the pacing and actions scenes seem almost boring compared to other action films of the era (Die Hard, for example). Batman‘s pacing isn’t necessarily a bad thing, though; it’s always nice to see a film take its time. Batman Begins isn’t wall-to-wall action, though, either; it plays more like a character drama.

There’s also the regrettable Prince song “Bat-Dance” to consider. Remember the days when every single movie and tv show had a song that went with it? I miss those days; the best songs were the ones that explained the plot of the movie/show. 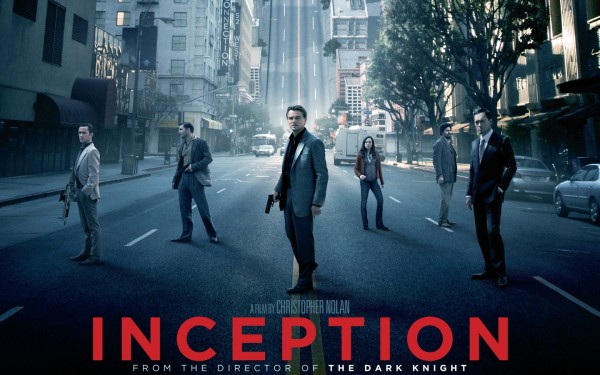 Can you imagine if they still did this?

Batman Returns (1992), dir. Tim Burton- The follow-up to Tim Burton’s first outing at the Batman helm, Batman Returns is much darker, more exciting, and tells a much larger-scale story than the first film. It’s also a better movie; the plot is more hackneyed, the dialogue is (somehow) cheesier, but somehow it still manages to be more watchable. The most striking elements that set it apart from the the first one are the action set-pieces and the music; Danny Elfman’s brooding organ-laden score is incredible. Also, there’s no theme song by Prince, which goes a long way.

Danny Devito is probably the perfect choice to play the Penguin; his unique physicality and capacity for both subtle and broad humor makes him an even better foil to Keaton’s Batman that Jack Nicholson’s take on the Joker (which I always thought Jack phoned in). I never really got the whole Michelle Pfeiffer as Catwoman thing, though; I would argue she looks better in literally every other movie she’s in, because she’s a gorgeous woman who isn’t wearing a mask the entire time. Maybe I’m just not attracted to women who look like crazy cat ladies [which is patently false, because I’ve always thought Helena Bonham Carter was hot in a weird sort of way]. 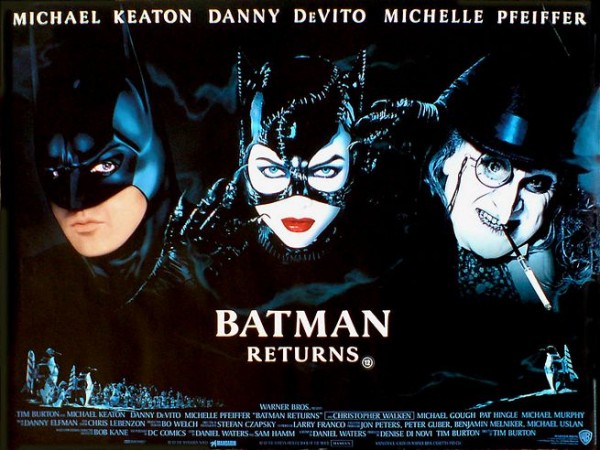 This was the coolest poster I owned until Taco Bell started including Episode I posters with their value meals.

Batman Forever (1995), dir. Joel Schumacher- The best part about Batman Forever by far is that it’s the only Batman movie Val Kilmer is in. Val Kilmer isn’t a terrible actor, but he seems almost as bored by his performance as the audience is. The scenes where he’s talking to his psychiatrist (played by an indifferent Nicole Kidman) about his feelings are excruciating; it seems he’d rather be doing anything else but saying his lines at any given moment in the movie.

I actually understand the casting of Val Kilmer; he was one of Hollywood’s bad-asses at the time, and is pretty talented (he’s great opposite Robert De Niro in Heat, which came out the same year as Batman Forever). The problem is, while I could see Val Kilmer being good in a more serious Bat-film, Batman Forever is a cartoon. The incredibly uneven casting of serious actors such as Kilmer, Nicole Kidman, and Tommy Lee Jones alongside Jim Carrey combined with the campy, comedic tone of the script results in a mess of Adam West-ian proportions. 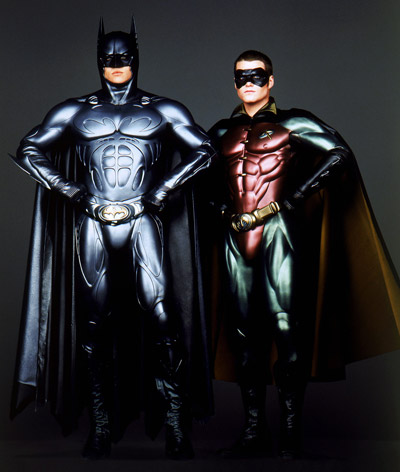 That is some seriously prominent crotch armor.

Probably the most memorable part ofÂ BatmanÂ Forever‘s legacy is the hit song by Seal;Â Kiss from a Rose still gets plenty of radio play. Most of the people that like the song now probably don’t even know what movie it’s from, just likeÂ All-Star by Smash Mouth [bonus points to anyone who knows what movie soundtrack it originally appeared on]. 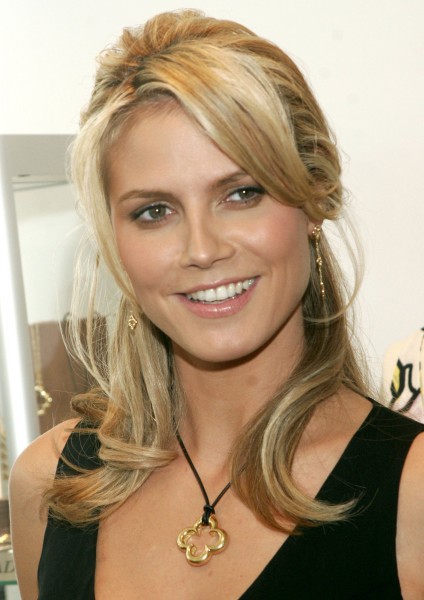 Seal’s ex-wife Heidi Klum. Because any time you can include a completely extraneous picture of a supermodel in a Batman article, you have to do it, right?

I’ll always have a special place in my heart forÂ Batman Forever; it was the first Batman movie I saw that really made me like Batman. After I saw it, I was onboard; I got the Batcave, the Batmobile, and countless action figures. This was around the same time in the mid-90’s that the sequel toÂ Jurassic Park came out, and so there were a lot of dinosaurs and assorted other toys mixed in for measure; Jeff Goldblum had an oddly prominent place in Gotham City adventures around this time.

Batman andÂ Robin (1998), dir. Joel Schumacher- And here we come to the low point. What do you say about a movie that’s widely panned as one of the worst of all time? Well, first of all, you could say that it’s inaccurately named; based on the superhero line-up, it should be calledÂ Batman and Robin and Batgirl. You could also say it was a compelling argument against Joel Schumacher making any more movies. But that would have been a crime, right? Because then we would have missed out on classics likeÂ The Number 23 starring Jim Carrey.

Don’t get me wrong, I lovedÂ Batman and Robin when it came out; I had just seenÂ Terminator 2 andÂ Conan the Barbarian on cable, and was a huge Arnold Schwarzenegger fan. Add to that my nascent interest in the opposite sex in the form of Alicia Silverstone and Uma Thurman, thinking Coolio (who has a not-so-memorable cameo) was, well, cool, and the fact that I liked anything with explosions, andÂ Batman and Robin was a perfect storm. 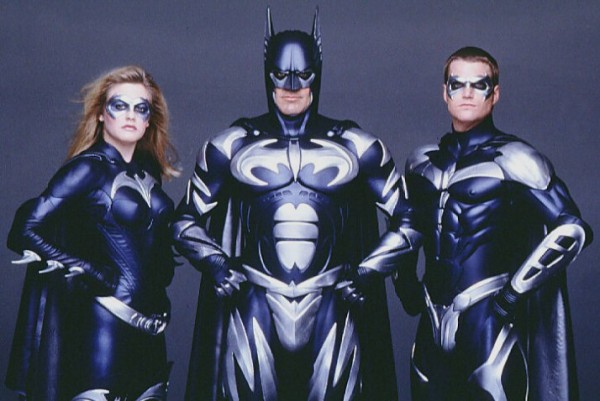 Needless to say, I’m excited aboutÂ The Dark Knight Rises; I’m getting a little bit burned out on the superhero movie thing, but considering thatÂ The Dark Knight was the last truly great comic book movie to come out, I’m optimistic about it. I’m not expecting the new film to be as good as the last one was (I think it would be very difficult), but it still looks like an epic, fitting conclusion to Christopher Nolan’s series. The Batman series has had so many different faces, it will be interesting to see what the next one is. We might not have to wait too long to find out, even; the new Spider-man movie came out only five years afterÂ Spider-Man 3. In the interest of respecting the work done on the last three films, though, I hope Warner Bros. gives Batman a little longer break than that.

At any rate, time to get pumped for the new Superman movie. 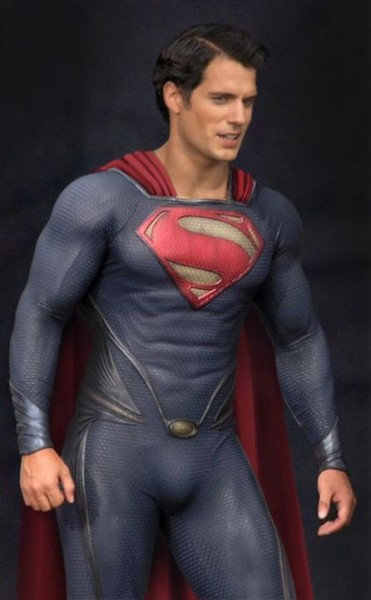