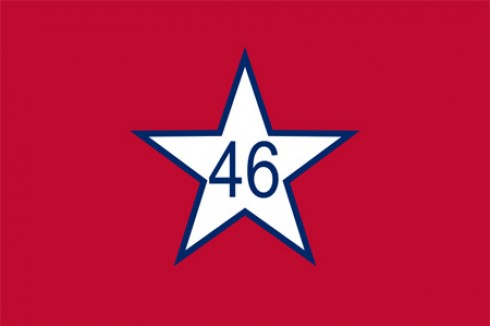 The first flag of Oklahoma, long a symbol of progressivism in the sooner state.

An art professor once told me that the biggest mistake a person can make is to believe their own hype.

As an artist, you spend so much time self-promoting, so much time extolling the virtues of yourself and your unique talent that you can lose sight of your flaws, stop working on yourself, and get lazy.

â€œThe tension between those two selves – the one you present to the world and the one you keep to yourself -Â  is where art lives.â€

I’ve never forgotten that, and should you ever be convinced by my arrogance and self-aggrandizement that I am a narcissistic tool, please know that my actual self-estimation is far more harsh than anything you have in mind.

It occurs to me that the same danger exists in cities and states on a wider level. We have seen in my lifetime a major sea change in Oklahoma and OKC in particular. When I was growing up, OKC was a place we all were, not a place we wanted to be. The expectation, at least in my middle class neighborhood, was that you go off to college, either out-of-state or at OU or OSU, and then you find the next available exit, be it to Dallas or Houston or Kansas City or points beyond. Oklahoma City was a way station between birth and greatness; the sort of boring Midwestern city that provides the â€œlocal colorâ€ in any number of insufferable off-Broadway plays.

Our â€œrenaissanceâ€ relative to where we were, has been breathtaking. We are no longer a place to escape. With our low unemployment and friendly people and good bar-b-que, we are actually a destination now, at least for a certain unpretentious working class upwardly mobile type; I have met more people from the industrial Midwest in the last 6 months than my whole life previously. People go where the jobs are, and the jobs are apparently here. I can’t service airplanes, so I’m screwed, but as one guy told me â€œit’s not that different from building cars.â€

I feel pretty good about OKC. We’re on the right track. We will continue to grow, continue to build. Our boom/bust cycle seems to finally have given way to a period of stable growth not dependent so much on the fossil fuel industry. At the Myriad Gardens recently, watching my son play in the fountain, watching families and students and crusty jugglers enjoy the park, I was struck by something: here was a project (the Myriad Gardens renovation) that was exactly as good as initially advertised. The city government (and their corporate overlords) promised us something really great, and they delivered. That’s the sort of thing that builds credibility and trust. That’s the sort of thing that makes me not pissed about Project 180 or the new Central Park. I’m a cynic by nature, but I’m bullishly optimistic about OKC.

Oklahoma is another matter.

I would lay down my life for the powder blue flag of Oklahoma, I know the Oklahoma Pledge of Allegiance (â€œI pledge allegiance to the flag of the state of Oklahoma, its symbols of peace unite all peoplesâ€) and I would not live anywhere else if I had a choice…which I do.

Oklahoma is home, it’s a place I defend rigorously against outsiders, a truly lovely land of rolling hills and purple lakes, a land “resembling an unkempt English park” as a monk in central Oklahoma pre-statehood said, a land of small farms and quirky art colonies. I love this place.

Between you and me? Us locals? It needs some work.

Oklahoma should never be held to the standards of other parts of America, because we are different. We are a land of refugees, political and economic. From the Trial of Tears to the Fall of Saigon, Oklahoma is what you do when all else fails. Our cultural DNA is progressive, or rather, Populist. Many of our â€œfinest familiesâ€ were solid socialists back in the day. I won’t embarrass them here. I know it’s important to keep up appearances for the Country Club.

We best resemble an eastern European nation, complete with a showpiece capitol thick with pot-bellied bureaucrats and cynical industrialists (our dear Oklahoma City), a historic cultural enclave where the rich can live sequestered from the common folk (Tulsa), quaint University towns where future ex-pats stop off prior to their research fellowships (Norman, Stillwater, et all), an army town full of people who miss their homes in the civilized world (Lawton), and disaffected agrarian peasantry all between. All that’s keeping us from being Poland is the castles.

And we are facing a positively Poland-esque cultural dilemma, as the countryside becomes more conservative and the cities become more liberal. Which one is the “real” Oklahoma? It is safe to say that Oklahoma City is a blue city in a purple county in a deep red state. A house divided cannot stand; either OKC and Tulsa will force their will on the surrounding lands (as we see in Pennsylvania and Ohio) or the hinterlands will hold our leftist enclaves hostage (as in Texas, South Carolina, Arizona, etc). Would it be more healthy if all the liberals stayed in their communities instead of moving to OKC/Norman/Tulsa? Sure. It would be better for all of us, but I can’t in good conscience ask for the people of Meeker to stay and “Fight the Good Fight.” It’s easier in OKC. It really is.

It doesn’t have to be like this. These social wedge issues that have torn us asunder are not our destiny; Oklahoma is still a poor state, and we should cast our lot with the poor. Jesus would want that anyway. Southeastern Oklahoma is one of the â€œpersistent poverty regionsâ€ of the US, it is a place where the majority of the people have been below the poverty line for the past 30 years. For those people to vote for a man like Mitt Romney – whose dressage horse Rafalca will soon prance in the Olympics – is complete lunacy. Money speaks for money, the devil for his own.

I know that at least 33% of our readership resides in Austin or Dallas. I say to you: move home. Come back to us, Whatever opportunities you chased, they are here now. Oklahoma is a smaller state, you can have more of an impact here. Come home and help us build something great. All you expats in other states, remember that you will always be Okies in California, Oregon, Washington, Texas, New York. Here you can be Oklahomans. Hold your heads high, quit denying your roots. Come back and help us do extraordinary things.

I read a recent article by an out of town sportswriter (those of us who have worked in journalism know that sportswriters are the true assholes of the newsroom) wondering why the people of OKC stand by Russell Westbrook, whose shots are sometimes so questionable. I think it’s because we know what it’s like to try and fail, because we know what it’s like to face unfair criticism, and because we believe that true greatness comes to those who work for it, sweat for it, ache for it.

Remember: â€œThe tension between those two selves – the one you present to the world and the one you keep to yourself – is where art lives.â€