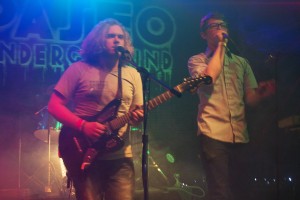 Dylan Eubanks (left) and Travis Brazeal of WeKilledtheLastSuperhero, perform at Paseo Underground on April 6, 2012. The group is a space-rock outfit of Tulsa transplants to Oklahoma City. (photo by Brittany Dalton)

This Saturday, June 23, local entertainment venue Paseo Underground, located at 23rd and Walker, will close its doors after hosting one last show.

It is with this in mind that I’d like to address the owners of Paseo Underground, as well as the guests and bands that have frequented the venue in the last 5 years.

Dear old Paseo Underground, I remember when you were young; seems like only yesterday.

They called you Bora Bora back then, painted tropical colors and pimped out with portraits of rock stars on the north wall. I used to wonder about these: who painted Elvis, Bob, Janis and “Jimmy” Hendrix? How often did concertgoers point out the obvious misspelling?

It was Bora Bora where my concert v-card was punched, though for a delayed show on a late Friday night. Instead, I spent two hours talking in the parking lot with Classy San Diego and waiting for more guests to arrive. There weren’t many people out that night, and I found myself sitting with one of my ex-boys on one of the couches lining the footpath to the stage.

Needless to say, after three hours of social mishap with a boy I once tangled tongues to Sufjan Stevens with, I swore off Bora Bora for good. I’d like to say that at the time, this decision seemed reasonable.

But in that time a year passed – what once was Bora Bora became the Paseo Underground most people know. I tried to remain noncommittal and distant.

“Subterranean Sundays? Stand-up comedy nights? What fresh hell is this?” I often wondered aloud, though my conviction wore thin as time passed. Despite my initial reluctance, I’d like to take the time now to share some of my favorite concerts at Paseo to date.

Friday the 13th dawned before I decided to give the venue another go, this time to see a friend’s band for the first time. I saw only two of the three bands slated to perform, hiding on a stool near the bar. Smoke swirled in spirals above my head as girls in tight black dresses and spiky heels staggered to the counter.

Between bear hugs and shouts of praise in lanky hipster boys’ ears, I fought my way back out the front door to ride my pumpkin carriage back home before midnight, lest the spell of the night be broken. 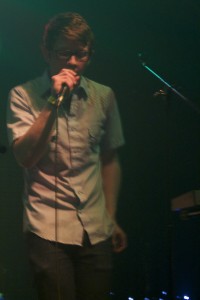 Okay, whatever. One good experience does not a devoted patron make.

A little-known fact about myself? I never show up late to shows. “Fashionably late” (fashionably anything, for that matter) isn’t a term I’m familiar with. It’s lucky I came early, though, because only the pre-show festivities place this night on top.

I whiled away 30-odd minutes talking with “the girlfriends,” two girls identical in stature, style and stance, each holding a cigarette lazily in their right hand. From there, I learned how to play pool with these girls. Er, I mean – I got schooled.

In other news, I also experienced my first real “musician diss” at this show. Lads and ladies, it’s never a good sign when a guy includes you in a sweeping gesture as “the band and some friends.”

If you ever find yourself wondering whether it’s worth the under-21 entry fee just to try to flirt with a musician – probably not. Save your money. 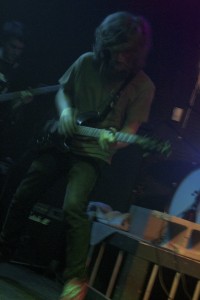 The show that almost wasn’t. Friday the 13th, round two.

Tornadoes touched down in Norman this night, and by 5 p.m. school sports, church dinners, and other events across the metro had canceled. It was into the pinkish-orange post-storms sunset I drove, to practically the only event still on for the night.

This show, of all my visits to Paseo Underground, ranks highest.

I sat with the opening band in a smoke-filled corner, watching the bassist chain-smoke Camels and chuckle at Regular Show. Cartoon Network gave way to a foreign film that had to do with racist slapstick, and general tomfoolery. The show itself started a half-hour late, and from the get-go the night seemed to be working against me. While snapping pictures of the Hitt Boyz set, my camera gave a beep-beep and shut off. No room on the SD card, no spare. And no battery.

Paseo, I’d like to thank you for this night above the others because it reaffirmed my passions at a crucial point in my life. “The scene” isn’t about how much more “mainstream” you think this band’s album was or whether you “heard them before anyone else.”

Sometimes, it’s about smoking cigarettes and swigging beers with a band, laughing at your own supplied dialogue for the movies playing silently on the big screen. Sometimes it’s about getting in free because of the time you gave the keyboard player a ride to his family dinner. And sometimes, maybe it’s about sitting on the curb outside and watching drunk girls bare their bare ass in the parking lot.

So, Paseo Underground, here’s to you. And here’s to the nights you have given us “scene kids,” we who endured slurs yelled by “bros” in Tapout shirts as they sped by in their BMWs. Here’s to the nights we laughed in the face of Mother Nature just to start the weekend right.

4 comments to “An Open Letter to Paseo Underground”