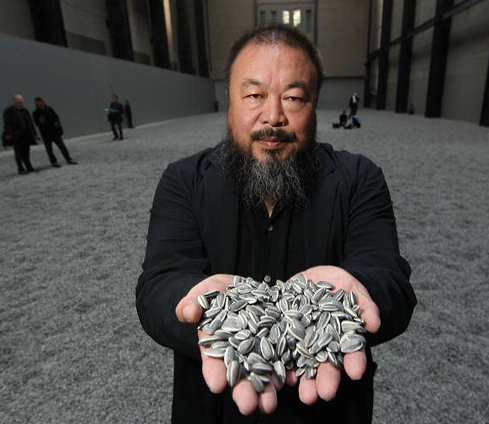 It looks like you could eat these, but no.

The curatorial commentators tell us that Ai Weiweiâ€™s dissenting voice is a lonely one in China today. This loneliness culminates in Weiweiâ€™s being detained for over 2 months after much Twitter activity in which he criticized the Chinese government while calling for more transparency. For the duration of this detainment, U.S. Secretary of State Hillary Clinton called China’s actions a disgrace to global human rights.

In Alison Klaymanâ€™s first documentary, the footage reveals Weiwei walking into the night upon his release from detainment.Â  He declines to say a word to reporters who are asking for a comment, any comment, and for the first time in the film Weiwei does not stir the pot.

But there is a faint Buddha smile on this portly artistâ€™s face. A Cheshire catâ€™s playful grin (and indeed this man could be described as cat-like, for the Weiwei art compound houses many cats). When he studied abroad in New York he was known for humorous installations and mixed media projects; to-date the raincoat with a condom remains the most vivid example to come to mind. This light streak of mischief is Weiweiâ€™s contribution to a pop culture phenomenon surging through the inquisitive and unsatisfied circles of China (thereâ€™s t-shirts, pop art posters, Twitter followers by the thousands). It all marches on in Weiweiâ€™s name. And as these things grow, the viewer is placed in an odd position. A New York reporter nervously asks him questions about his baby, and the mother of the baby, as if painfully realizing that one of the lone dissidents, and thus a hero, in Communist China is in fact as fallible as you or me, capable of sleeping around.

And this is a point my friend Lanita makes to me when Iâ€™m expressing some exasperation with the angle chosen by the film-makers, that of dutifully following the subject around in reverence.

â€œDude doesnâ€™t want to be worshipped, look at him,â€ she says to me. 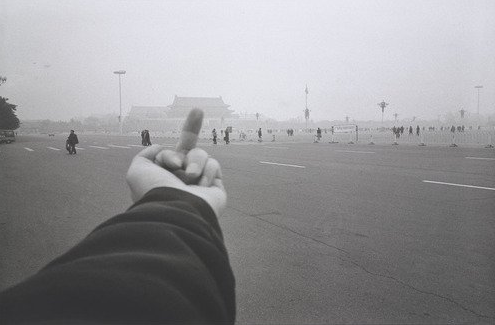 Expressing more dissent with one finger towards his government than some will dare to do in their entire lifetimes.

And indeed Weiwei may not. The most moving example of this humility of spirit is in Weiweiâ€™s obsessive effort to record all the names of the 5,000 students who were lost in the 2008 Sichuan earthquake. The government was willing to let the names go unacknowledged. But on the walls of Weiweiâ€™s compound hang rows and rows of names, in sober black ink. Heâ€™s also blogging and twittering about his findings as he goes. The artist has become the activist. The belief that each life is dignified and sacred has always been at the pinnacle of human expression. These are the strongest scenes of the movie.

A belief in the importance of each individual, and indeed a humanistic stance that embraces the individual is Weiweiâ€™s contribution to the discourse in China, and one he bravely keeps alive. Any of his fans who know him well were delighted, not surprised, when he disowned the giant birdâ€™s nest he designed for the Beijing Olympics when finding out that folks were displaced from their homes to make the giant sporting event happen.

But at other moments of the documentary this concern for the people is not presented with the impact that it could have been. There is news footage of crying women being pushed away from their homes. We see the list Weiwei has acquired, and a James Agee/Walker Evans style book of photography is mentioned, but these moments happen on-screen as quick as fluttering wings. What the filmmakers seem to find most filmable in Weiweiâ€™s life are pictures of him flipping off landmarks. Or saying â€œfuck you motherlandâ€ to a camera video, soon uploaded online. Or his tireless effort to take his case to court (he was unjustly beaten by police) in a scene recorded on audio. He records the bureaucratic tangles with consistency. He celebrates small victories by meeting fans and followers at his favorite noodle place. In public, agents are recording his every move. The audience laughs when one of Weiweiâ€™s personal photographers starts recording the agents who record Weiwei.

For me, this picture within a picture scene, cameras turned on cameras, is to experience severe media vertigo–to experience an unsettling slice of Orwellian reality. We are an age of the quick video, and the more I saw Weiweiâ€™s focus tend toward this kind of gesture, the less artistic I viewed this vaunted artist to be. Itâ€™s mostly the difference between the hardcore painter and the Dadaist gesture, when it boils down to it. If you are Chinese, and longing for a voice, that picture of the middle finger will stir you to action perhaps. But if you are an American, and have witnessed the unfocused, self-pitying and unsuccessful efforts of young artists and activists for decade after decade, then you are a bit less impressed with the art of quick camera protest. The target audience for Klaymanâ€™s film are no doubt progressive Americans looking to learn about styles of radical dissent; it may serve to only re-enforce their most self indulgent habits.

This is a time that calls for words and thought that take longer to develop than a TwitPic.Â  I went to a few Occupy events and found mostly egos and chaos, and squabbles over control. Not in those movements, and not in Ai Weiwei: Never Sorry did I meet a scene as striking as that of the one depicted in Spike Leeâ€™s Malcolm X, where lines of disciplined men full of temporary belief in themselves march in front of a hospital to make sure that one of their own is taken care of, after the victim suffered unjust blows from police officers. They had a genuine, fearless leader. Free speech is something worth fighting for, and Weiwei somewhat does that with his gestures, often made on a computer from his artistâ€™s compound, but ultimately, itâ€™s going to take more than an artist, and certainly more than looking to an artist for answers.

So for me, the message to glean from Weiweiâ€™s work is in his tireless championing of individuality. For he surely is an individual. The last big project we see was commissioned by the Tate Modern art gallery in London. There sits the work of millions of porcelain sunflower seeds that have been painted, each different, and each a symbol of the variety of life the world doesnâ€™t get to know about China.

I figured it was best to ask a Chinese person what he thought of the film before I sat down to write about it, so I went (well, I was there anyway) to Coffee Slingers to find that nice guy who works the counter who usually has good advice. He is a small fountain of clean water kinda guy. He was sitting behind me at the film. At the coffee counter his jovial disposition grew more severe after I asked him what he thought of the film.

â€œI feel like I havenâ€™t been strong enough,â€ he said. â€œThe film upset me. I lived there for 21 years. â€¦ Unless youâ€™ve lived there, you do not know.â€

So with that I concede I can only vouch for my impression of Weiweiâ€™sÂ  art. My own conviction that being a provocateur has limits, and people who are primarily such should face more skepticism. For the young Chinese man, Weiwei is a fighter and he has spoken up, something many youths have failed to do. The film was very close to home for him. And the only reason itâ€™s not as close to home for me is probably because a successful shield of pacifying pleasures has kept me from knowing what my own corporate environment has done to the land and people all around me.

Writers in the past have said that totalitarianism first seeks to flatten a peopleâ€™s mood, to erase mood entirely, the ability to feel and care. If the plague of our potentially political or artistic people is apathy, then the word totalitarianism might not just be reserved for â€œoppressedâ€ lands across our seas. If anyone feels indifferent to Weiweiâ€™s struggle it might be because our world is growing closer to Weiweiâ€™s than we might like to think.