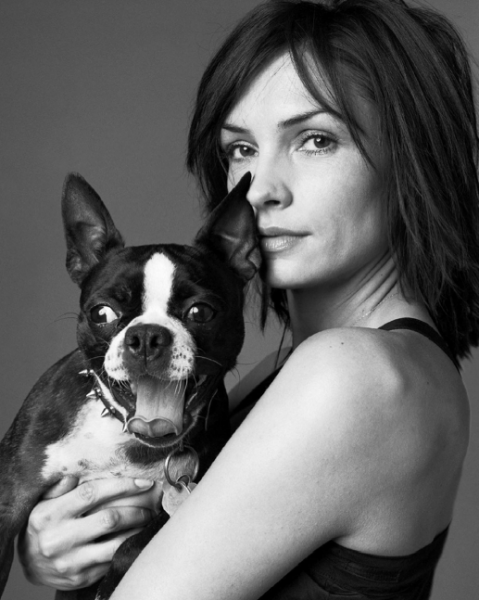 Can you guess which one goes by Licorice?

As I sit and enjoy my free beer, with a Puritanical outlook that nothing is really free, I ask myself if deadCENTER has â€œgrown?” This is one of the festival’s annual goals. And if it has grown, what does that mean? I was at deadCENTER last year and enjoyed the mix: promising short films from film students across the U.S., enjoyable shorts from Oklahomans, and a jury prize winner about an atheist who meets a fundamentalist and shows her “the way,” which is a comfortable message for artsy types who have abandoned the fickle religious dogmas of their hometowns. We also had the obligatory â€œmessageâ€ movie about the decline of solid journalism, but none of its makers seemed to encourage the kind of social commentary that I think it would take to give deadCENTER more cultural and artistic clout.

Even so, I’ve found there are plenty of solid, edgy, films being offered this year. I was challenged by Sarah Polly’s “Take This Waltz” and was sad to miss the Odyssey-themed “Keyhole,” with thought-provoking director Guy Maddin at the helm. And yet as I glance around from people bedecked in traditional African garb, to eye-splitting plaid and designer shoes, to the obligatory gold bracelets and the heavily made-up society maidens of the OKC money crowd, I find there is no real philosophical debate going on at this â€œartsâ€ exhibit. Compelled by what I see, I half-jokingly say to Cinema Six director Mark Potts that â€œOklahoma just isnâ€™t ready for culture.â€ He laughed, not wholeheartedly agreeing, but saying deadCENTER has felt the same the past three years. His partner in crime and him then engaged in a guessing game. How much did Chris Kattan get paid to do â€œJust Crazy Enough?â€ 250K is the settled guess.

This is perhaps what it means for a festival to get bigger, to grow. My fellow college journalist, Potts, now talks of figures for actors; it’s the kind of language you must learn if you are to survive in the always growing and ever-competitive entertainment business.

If itâ€™s grown, then there are still a few elements that look the same to me. Last year we press people interviewed a first-time film director who followed the Kings of Leon out while they got drunk in the country. In the Kings of Leon documentary, “Talihina Sky,” the climax comes when the Kings pull up to the then Ford Center. At the screening a backyard-style crowd of thousands howled in triumph. At the time it felt like a defining moment for a major league city.

This year at the opening night screening the experience of getting drunk in the country (Talihina Sky) was substituted for a second best option: a documentary about Bob Marley, which was akin to getting a vicarious high in the Beta house. In both cases, these ended up feeling like a heavy sandblast to the natural, native, beautiful human intellect. However, there is something quite powerful about being in this atmosphere; it causes you to stop thinking and to just admire things plainly, call it the spell of fame. This year, again, we bring in another line up of celebrities to watch like exotic birds, and actually later when I see Famke Janssen in person, it turns out movie stars are really like that, from her height, straight-backed supernatural poise, the dog she takes with her everywhere, the dress, and the green smoothies an assistant rushes to her after the press interviews – I find myself sucked into this world. But this is the lure of deadCenter, is it not? I am pleasantly restored to reality when my date bends over and starts petting Janssen’s dog, which as it turns out is an approachable Boston terrier. This confuses the press girls working at the media table. My date asks Janssen the dogâ€™s name, which we’re told is Licorice, and says affectionately, â€œhe sure knows who you are!â€ when the dog leaps out from under the table to join Janssen after the interviews.

Jannssen told the press corps that she shot “Bring Up Bobby ” in Oklahoma because of movies like Bonnie and Clyde, and because the region had a kind of innocence to it. It truly is an interesting sight to see the mix of artists, actors, etc. with the new big money folks who benignly look on and enjoy themselves. You donâ€™t really know whatâ€™s on everyoneâ€™s minds. One minute, during the first cocktail party, Iâ€™m talking to some amiable ad reps from This Land press, and they tell me that this cowboy-hatted man, who stood alone and stern faced, is trying to get in the business of streaming movies online. When did it occur to this quiet man in a brown jacket to get into this business? I pivot away politely and notice a whole New York crew from a feature film wants to meet me, and my friend/ â€œphotographerâ€ Joe Cappa. I never tire of watching the entertainment world descend upon our still somewhat innocent one (if only innocent in how much we choose to know about the business side of these things, or how much we freak out at the site of a celeb, or both). After a good natured conversation Iâ€™m handed a business card: on the front this pretty brunette looks all business. Producer and Actress, it reads. On the back side of the business card is a picture of her in less attire, lying on her bed, looking at the camera delicately. With wry amusement, I wonder which side of this card do I contact if I give the film a good review?

Oklahoma City is growing, that much cannot be denied, we are in the NBA finals with a team of humble bearing that probably puts to shame this entire artsy-fartsy parade. And it looks like we want it all and the high art culture too. deadCENTER is a step, and has some engaging films that I can’t wait to dig into for you. Iâ€™m glad we have deadCENTER. But the riff-raft of the bunch speaks of a little cityâ€™s attempt to mix movies â€œwith a messageâ€ (“Ai WeiWei: Never Sorry“), student films, along with movies that celebrities made here. deadCENTER and its party atmosphere in some ways frantically caters to any type of Hollywood personality it can find. And while you are looking around for some semblance of high art credibility itâ€™s hard to focus on what standards it would take to host a more â€œserious festival.â€ Maybe it requires you to stand around and look like you know what you are doing until â€œHollywood,” whatever that is, comes to you. For me the benchmarks for a growing a serious film festival are: story, heart, soul, good casting, subtle music which acknowledges the spirit of the story while not getting too much in the way, a level of seriousness, smart comedy, complexity, and ballsy decisions, when appropriate. It means showing movies that were made because the filmmakers wanted their vision to be expressed in a very particular way. These battling visions and voices of intention are still among us, right here at this festival, and it is this kind of mix that keeps deadCenter interesting for all the varying potential viewers and sponsors. I’ll let you know if by the end of it if I think it has grown by leaps and bounds.