No one likes a full beard on a singing banjo player better than I, and happily this is the kind of scene that opens the Future Films Production entitled â€œBeauty Is Embarrassing.” – Samantha Lamb

WalkingÂ  onto a cluttered stage, amidst a collection of paintings and puppets, arrives a man who appears fresh from the mountains. Banjo in hand, he picks out a little ditty while smiling. And how can anyone not share in his delight? During the next hour and a half I had no idea that I would be falling in love with not only an individual and a family of artists from California, but with the mind-set of self-confessing uninhibited beauty.

This is not my first brush with the artworks of the fervently talented and beyond hard-working artist Wayne White, but it was the first time I’d paired his name with the font of art he has written into my life book, for these ideas and art swirl within my well-spring of creativity too. The film delves into Whiteâ€™s days as not only one of the creative directors, chief set-designers, and voice talent of Pee-Weeâ€™s Play House, but examines his role as creative director and drawing talent for a few of my favorite music videos such as â€œTonight, Tonightâ€ by the Smashing Pumpkins. Director Neil Berkeley does a seamless job of piecing together White’s life story as White advances from a young child whose reach stretches beyond thick tablets of paper to evolving his visual tangents and style, and wraps up with White’s current work as a gallery artist who shows across the world. 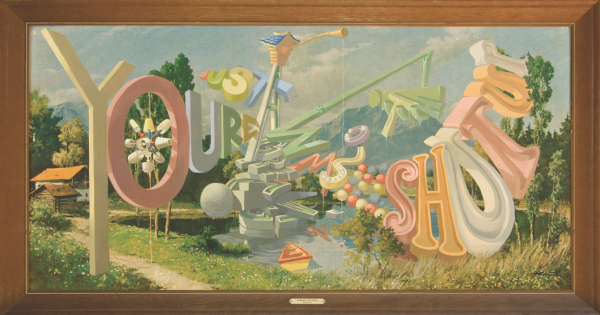 An example of White’s “word” paintings. Image courtesy of the artist.

Scattered perfectly, like vivid wild-flowers across a panoramic field, you encounter the many fanciful people in Wayneâ€™s life, including his two kids, Lulu & Woodrow, and his always supportive wife, Mimi. In her own right, Mimi is a wonderful artist. She creates a very endearing and humorous comic strip portrayal that depicts how she and Wayne met at one of his puppet shows, and how she eventually led him down a path destined to end in true love using only kitchen amenities and home cooking. Wayne and Mimi themselves narrate this utterly enchanting tale. This is the kind of family you wish you could invite over for dinner. I’ve no doubt there would be not only a feast of food, but conversation too, as their jokes and stories would be so funny you’d probably pee your pants (or dress).

Another one of my favorite characters presented in the film is Wayne’s good friend, and once college partner in crime, Mike Quinn. Mike is the kind of guy who would be the most obvious choice to dance a jig through any open pasture as long as Wayne was playing. These are the personalities you find throughout this whole film, because every person in Whiteâ€™s life has wonderfully warm and humorous side. Whether it is creating an impromptu over sized-head of L.B.J, which White dons while marching comically across L.A., or taking a hilly ride with Quinn through the mountains of Tennessee in a topless van, it is clear White acts on his inspiration and the things that make him laugh.Â  â€œI think humor is sacred.” Wayne passionately states on stage; there’s a banjo in his hands. He’s giving a speech surrounded by his renowned word paintings, “I think humor is the most important thing was have as human beings, even though it is thought of as a lesser quality.â€

If you support the notion that an individual should stay true to not only their identity, but also their ideas, then you should go to this movie. You will probably walk away all the better for it, because when I came away from this film, I felt I understood the thesis behind the title. More or less, I love what White is ultimately saying, which is that he’s been trying to create beauty his whole life, and that is not embarrassing in and of itself as long as you stay true to your art, and go do what you love.