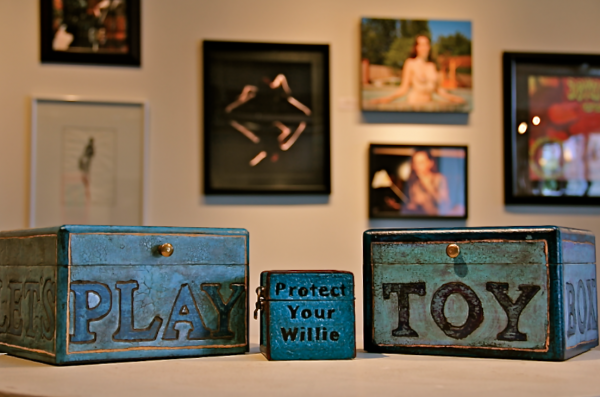 Sure, the annual erotic art show in downtown OKC is called Biting the Apple, but I took some time Wednesday afternoon to preview the art work that will be on display this weekend, and Â Ooo-la-la, is there a lot more loin fruit than seen in previous years. The theme for the 2012 show is “Glam”, which doesn’t necessarily cause fruit to spring to mind. However, according IAO‘s website, “Glam” is the notion that an object can appear vastly more desirable than it is, and that this magical way of thinking has spread beyond the silver screen to every facet of pop culture. 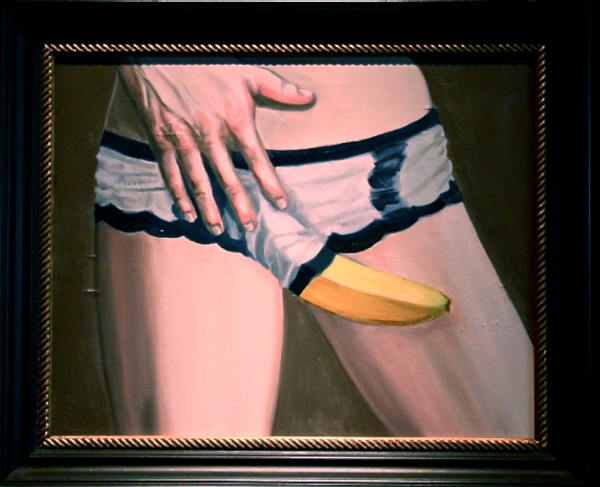 Executive Director of the gallery Clint Stone said the response from the community has been pretty good this year and that jurorsÂ Mike Wimmer, Marilyn Artus, and J Michelle Martin Coyne selected a fairly diverse group of artists. Having looked over most of the entries, I’d say the art ranges from traditional art mediums to mix media. A lot of it doesn’t strike me as overtly glamorous, but I think that’s kind of the point. The wide variety of art that is on display this year is playfully provocative and it’s nice that there is more dick in this show than you can shake, well….a dick at.

“Wait,” you might be thinking, “how is that a good thing? Penises are silly-looking, and testicles are like hard-boiled eggs tucked inside hackey sacks.”

Allow me to offer a rebuttal. The pervasive tendency in the portrayal of sexuality and gender in mass media (and culture at large) is the fetishization of the female body, but as for male members?Â  Not so much. Boobs sell, but manly bits are only good for low-brow comedy. Not that dick jokes aren’t funny, but still, it’s sort of a shame, really, to treat male genitalia primarily as an object of ridicule. So the inclusion of more phallo-centric art Â was a refreshing twist to observe at this year’s Biting the Apple. It’s nice to see the concept of “Glam” extending to the often lampooned penis. 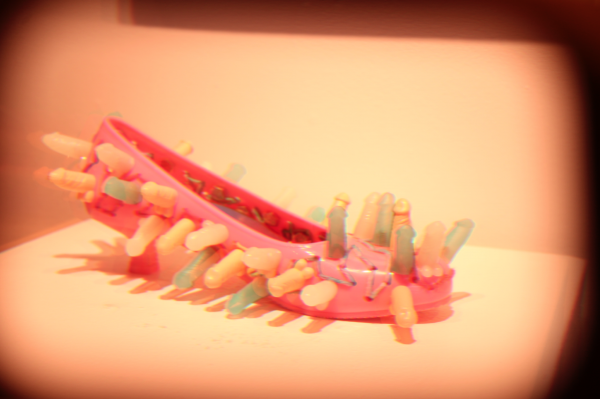 Claudia Wylir created 3-D shoes entitled "Lucky Pecker." This is but a sample of the effect, but to really see it pop, you'll have to put on 3-D glasses (provided at the show) and view the pair of shoes in person. For the record, do not Google "dick shoe". You will be most likely be sorry to see what comes up in the image search, as one of our editors found out yesterday. Photo by Helen Grant.

Alicia Smith is one of the new artists whose work has been accepted this year. Smith has known about “Biting the Apple” for a few years now, but this was the first year she felt as though she had something relevant to contribute in regard to the theme. Smith said she has always been fascinated by fetishes and pinups, and that as an artist she has struggled to find a way to express herself in sex positive ways. To aid in her research, she had read many blogs, looked at “tons” of porn, and examined aesthetically strong images. She said when the research phase was over she was inspired to create a collage.

“It’s kind of celebrating what I like sexually and making a visual stand that I won’t let anyone else ever shame me for what I like.” Smith said, “We need to smash those horrible constructs we have about how people should or should not have sex. Just because it’s not your flavor doesn’t mean it’s wrong. As long as it’s between CONSENTING parties, no sex is bad sex.” 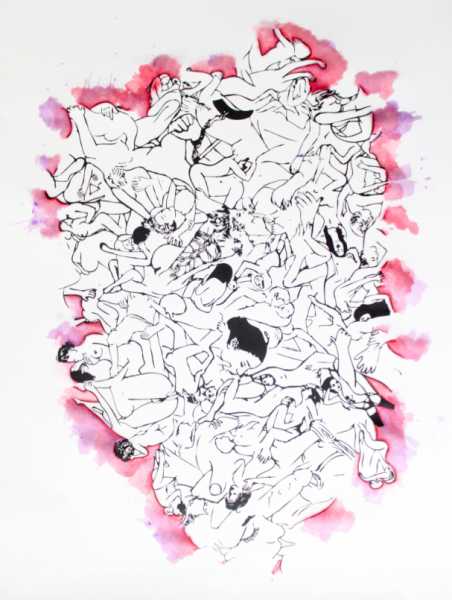 "Clusterfuck" by Alicia Smith. If you look really hard, you'll spot the penis. This is one of two variations that will be on display April 13-14th. Photo by Helen Grant.

All said, this juried art show will only be on display for two nights before IAO pulls it down to prep for their next art exhibit. If you’ve never been before, Friday night, aka “Opening Night,” has a charged atmosphere where the performance artists are just as much on display as the audience. Not that you have to dress up, but expect to see both guests and artists as a nearly indistinguishable group.

Tickets get you in and catering is provided by:
Picasso on Paseo
The Roadside Chef
Joey’s Pizzeria
Flip’s
Jazmo’s Burbon Street
The cash bar will be run by Picasso on Paseo.

There will performances by:
TNT Burlesque
Jabee Williams
Balthazar
Perpetual Motion Dance
The Ladies Of The Boom
7 Deadly Sins
2XLP

Ever seen live painting? No? Well you should. Marcus Muse & Co will be treating to you a fun show.

Tickets: $25 or $35 for both nights. You can purchase them at the door or online at Ticketstorm.

Think midnight is too early to end a party?

There’s an after party at Saint’s on the Plaza.

The IAO gallery is located at 706 West Sheridian Ave. in downtown Oklahoma City, in the Historic Film District.

2 comments to “Biting the Banana: Apples Not The Centerpeice This Year”