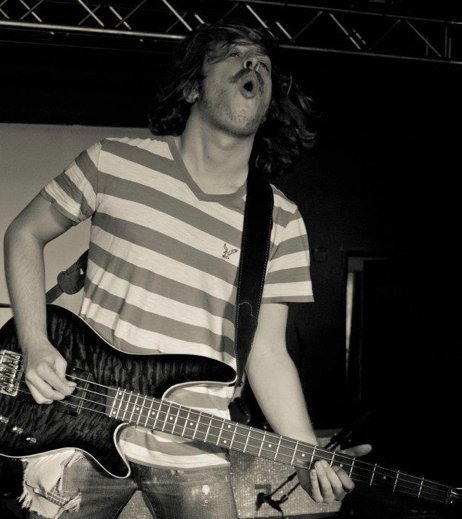 Guitarist Adam Thornbrugh of The Hitt Boyz. Photo courtesy of the artist.

There’s a Hitt Boy #4, 7 and 28. So what happened to all the others? Well, that’s for them to know, and for you to figure out. The Hitt Boyz are a post-rock, math rock outfit based in Oklahoma City. They play instrumental music listeners can groove to and songs aboutâ€¦your grandparents?

“Think about your grandpas,” guitarist and Hitt Boy #7 William Ogletree tells a group crowded around the stage at a March 7 performance. “Think about the best grandpa you ever had, guys. This is the ‘Grandpa Song.'”

The ‘Hitt’ List
Ogletree, along with fellow guitarist Adam Thornbrugh and bassist Brandon Schreiner, formed the Hitt Boyz as students at the ACM@UCO. Thornbrugh doubles as Hitt Boy #4 in the lineup, and Schreiner is #28.

All three are currently in their third semester as performance majors, and credit ACM@UCO for being a common link that binds them together. Although each member hails from the Tulsa area, they all pursued other things before deciding on ACM@UCO.

“I’ve been playing music in some form since I was seven,” Thornbrugh said. “I got into college and was still playing in bands, but then I decided to take a year off. Then I came here [to ACM@UCO]. I was going to go my freshman year of college, but there was this weird stigma about being at a school for musicians.”

The three met through their classes, Thornbrugh and Ogletree writing music together for a time before inviting Schreiner into the band. Schreiner says the two had already written a lot of what he calls “pretty rock” before he joined the lineup.

“We started with the idea of being like At the Drive-In, very energetic,” Ogletree says. “We kept that idea, but we don’t write music that’s necessarily similar to theirs.”

“It’s closer to Sparta – a lot closer,” Thornbrugh cuts in, explaining their music is greatly influenced by math-rock and math-pop. “Sometimes it hits me”

But what exactly is math-rock, or math-pop for that matter?

“Math rock is basically a lot of complex time signatures, where math pop works more to make that sound even more accessible,” Thornbrugh says. “It’s condensing the music into a product people can enjoy.”

They compare themselves to Japanese instrumental band Toe, a band for whom each member is inspired their sound. Thornbrugh and Schreiner also cite Modest Mouse, Explosions in the Sky, and Sigur Ros as influences too.

Ogletree says that he often finds his influences from listening to a variety of music. Much like Toe or their other influences, their music has no lyrics, but Ogletree says they’re still memorable. When asked if he thinks the absence of lyrics makes it harder for fans to connect to the music, he disagrees.

“It’s different, in a way, because there aren’t lyrics to stick out in people’s minds – but people still come up to us telling us their favorite song is this, or that,” he said. “We actually have a lot of people tell us their favorite is probably the ‘Grandpa Song,’ just because it’s so catchy-sounding. People like the way certain songs sound, it sticks out to them.”

Scratch that, though – some of their songs do have lyrics.

“Oh wait, there are lyrics in ‘Fast Boy,'” Ogletree corrects himself. “They’re like dun-un-unâ€¦WOOOO!”

“We yell in that one,” Thornbrugh adds. “That’s as close as we get to lyrics.”

“The New Thing”
The boys play local venues frequently, at times playing two or three shows in a single week. Most recently, they’ve played at Bad Granny’s Bazaar and at McSalty’s Pizza in midtown Oklahoma City. They frequent Bad Granny’s, playing there in January and returning for a show with fellow ACM@UCO bands WeKilledtheLastSuperhero and Carousel Revolt on March 16. They’ll also play at Sauced the night before, on Thursday, March 15.

Since their formation in November 2011, the boys have also gone through a handful of lineup changes, replacing both a bassist and drummer in only a few months’ time. A month into their most recent reincarnation, they’ve picked up Giraffe Massacre drummer Nick Morgan to drum in their band as well. They cite changes in their lineup to the busy schedule that comes with being a musician, something they all agree is “like a job in its own way.”

Despite these changes, they keep a focus on what’s important.

“We take our music seriously, but we definitely don’t take ourselves ‘too seriously,'” Thornbrugh says. “We have a lot of fun.”
And they do – with show flyers that showcase corgis in business suits, a habit of playing certain songs in their set shirtless, and even a few dance moves during sets.

“We’re working on our dancing,” Thornbrugh said. “Right now there’s just lots of jumps and kicks. But I think jumps are the new thing.”

A matter of perspective as with any creative endeavor, though, each member has also encountered their fair share of criticism, for their choice of careers and a variety of other things. All three cite encounters with people who have been critical, or who have tried to box the group into a specific genre. Ogletree and Thornbrugh explain that some people hold a misconception that certain genres are not for everyone to enjoy.

“I hate that, though,” Thornbrugh says. “Art is for whoever wants it.” 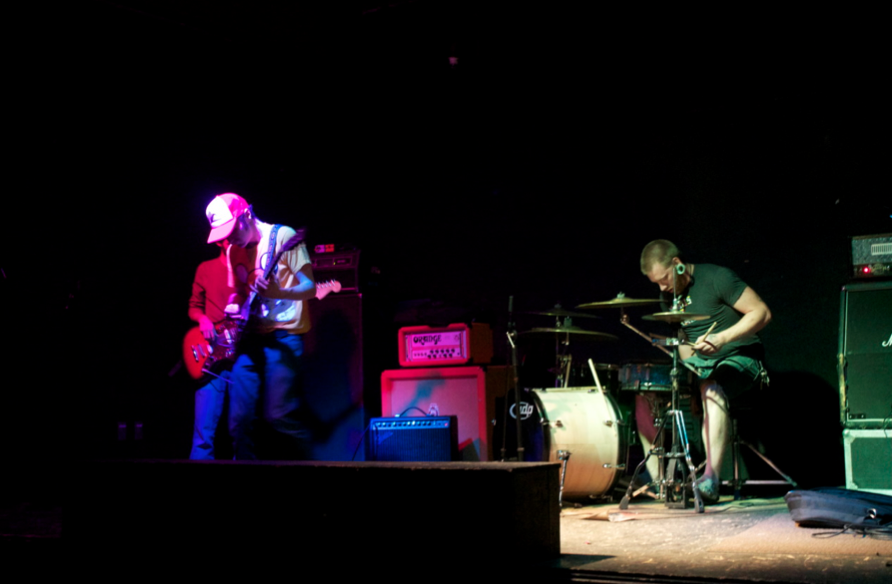 Right to left: Ogletree on guitar and Morgan on drums. This performance took place on March 7 at McSalty's pizza. Photo by Brittany Dalton.

And that’s their goal – to make music that not only do they enjoy playing, but that other people can enjoy as well. Thornbrugh says it’s a matter of perspective, and taking criticisms with a grain of salt.

“I’ve found that people tend to not like in other people, that which they really don’t like in themselves,” he said. “I try to always be humble. But at the same time, when someone says they like your music, obviously you’re gonna be like, ‘oh, cool!'”

Ogletree says that while it demands as much of the boys’ time as a regular job without paying, it pays in different ways. He says one of the most important things for himself and the band is to stay grounded.

“I think we all know this, but being nice gets you a long way,” Ogletree said. “It’s about just being friendly to people, and supporting them.”
Although they say it’s great to have fans that continue to come back to their shows, they say at the end of the day it is about more than the number of fans or the time they spend practicing and performing.

“It’s Just What We Love”
And it certainly isn’t just for the money.

“We were talking in our performance production class about this, but your music is a connection you’re creating between yourself and the listener,” Thornbrugh adds. “We play our music for people because we think our songs are awesome and we want to share that with people who will listen. Playing a show where people are having a good time and listening to stuff you’ve written, it’s really just the best.”
“Yeah, we’re proud of what we’ve done,” Ogletree adds. “It’s pretty fulfilling, really. But it’s just what we love.” 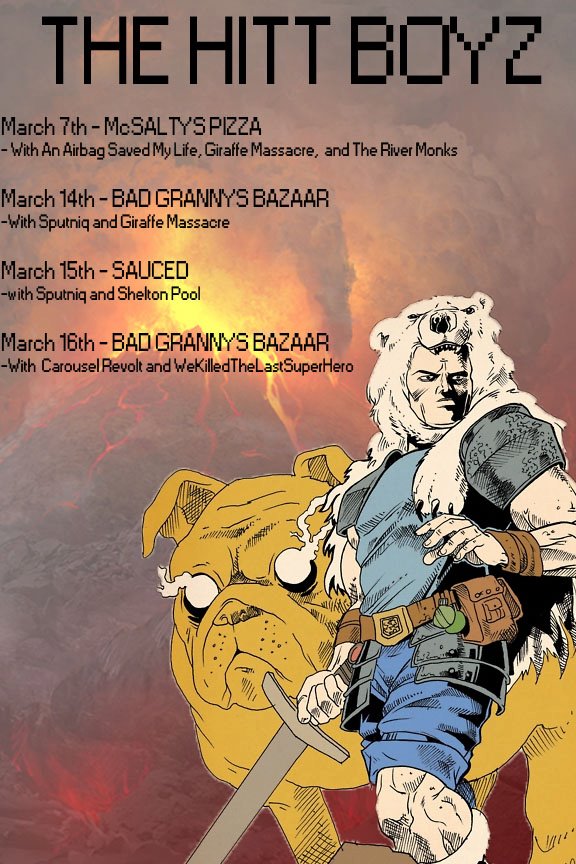 I don't know what the hell is going on in this poster. It's like Mordor meets He-Man meets the scarier version of McGruff the crime fighting dog, except, mercifully, without the trench coat. Poster art courtesy of The Hittz Boys Facebook page.