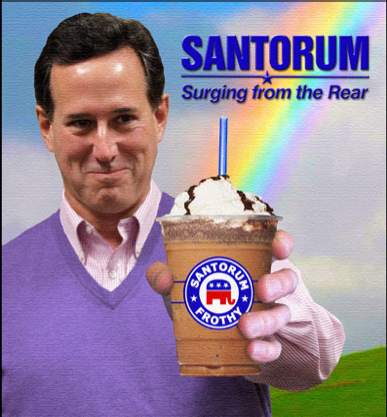 Super Tuesday has come and gone, and Oklahomans have finally gotten to weigh in on who they want to be the GOP nominee. By virtue of you reading this article, I would assume you have internet access and probably have already heard who won. On the off chance youâ€™ve been living under a rock (which I guess has WiFi) and OKC.net is your homepage, a plurality of Oklahoma GOP voters who bothered to vote in the primary endorsed former Pennsylvania senator and sweater vest spokesmodel Rick Santorum.

To those of us who have kept up with this stateâ€™s recent electoral history (or at least Googled it), this decision is quite predictable. Oklahomans ultimately favored the hyper-conservative, personhood begins at or possibly before conception, anti-contraceptive, and anti-womenâ€™s rights candidate over the slightly more reasonable candidates Mitt Romney and Newt Gingrich (no, Ron Paul is not a reasonable candidate). Even though Santorumâ€™s budget would actually increase the deficit, Oklahomans decided he is the man to fix our economy. One wonders who is going to employ all of those zygotes.

Santorum has made it his strategy to take the states which allocate the fewest delegates. Romney can win Ohio, Florida, California, New York and Michigan, but Santorum will respond with Iowa, Tennessee, North Dakota, Missouri, and of course, Oklahoma. Santorum was in Oklahoma this past week and claimed this state was â€œground zeroâ€ for his campaign. Given that Oklahoma is rarely â€œground zeroâ€ for anything other than fried pies and teenage pregnancy, that is probably not a winning strategy.

With Oklahoma having lost its â€œmost conservativeâ€ rating following the â€™08 election, this primary indicates a possible comeback. Not only did the moderate-yet-self-proclaimed-â€œseverely conservativeâ€ Romney lose, but he virtually tied Gingrich for second. Everywhere else in the country, Gingrich and Santorum have been splitting the conservative vote against Mitt. Not here though. In Oklahoma, we have enough conservative votes for both of them.

Some may say that our conservative neighbors are motivated primarily by fear (of brown people, the Rapture, Iran, whatever) pathos, and Fox News. I whole-heartedly disagree. Republicans in this state are in fact ingenious political masterminds with extra helpings of cunning. Unlike the rest of the GOP, they think strategically.

Oklahomans apparently are paying attention to general election matchup poll numbers. Romney is doing the best against Obama, only losing by a few percentage points. Oklahoma Republicans have clearly accepted the reality that with the economy improving every month, Obamaâ€™s re-election is all but inevitable. If Romney is the nominee, the GOP will have plenty of false hope to throw behind him, along with a few hundred million for his campaign. If Santorum is the nominee, even the GOP isnâ€™t dumb enough to back that horse, and will abandon the race immediately. Like an expensive flop released direct-to-video, the Republican establishment will have to cut their losses. Without the burden of a presidential campaign, the GOP will be free to finance plenty of Senate and House bids. Santorum will ultimately perform a Christ like sacrificial role to help the Republican party maintain their presence in Washington, simply because he has no shot at beating Obama in the general election.

Donâ€™t underestimate the Republican base. They just made a shrewd and savvy political move.