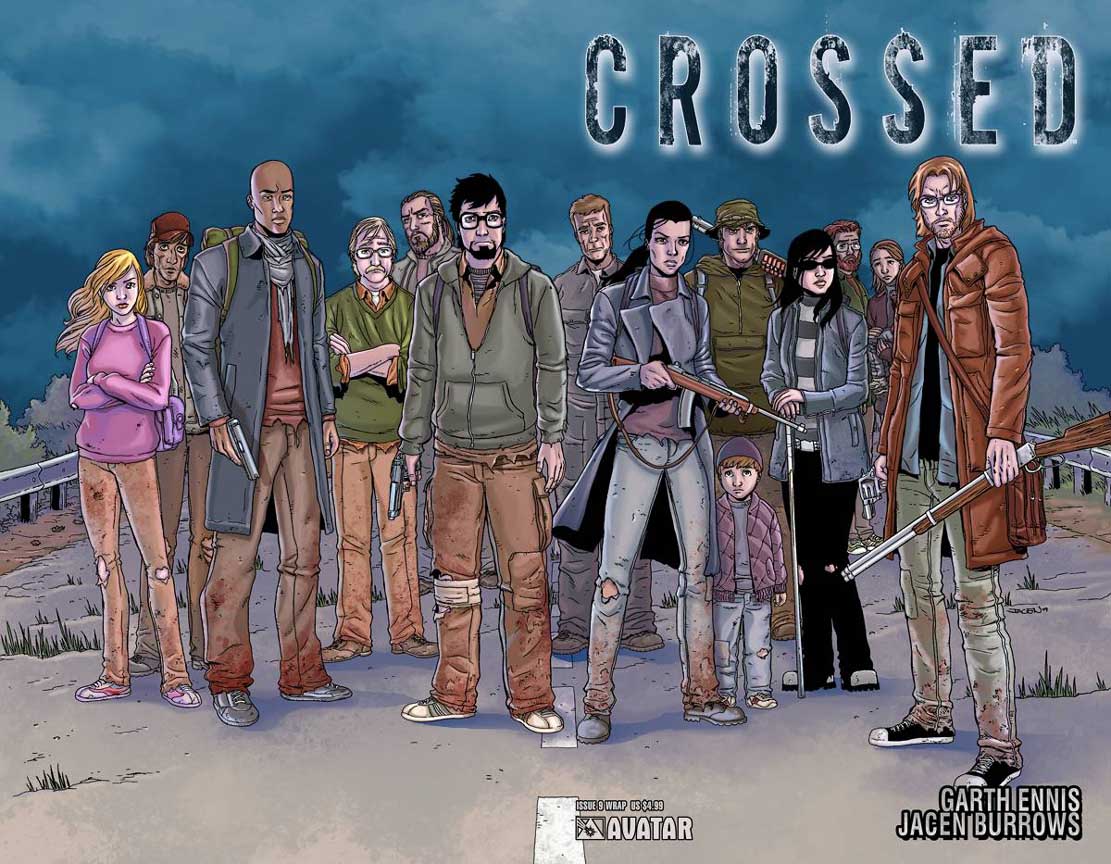 The only art from Crossed that can be printed without an “NSFW” warning. Art by Jacen Burrows.

Note: Let me just say at the beginning that a lot of the comics I read and enjoy are violent, even graphically so. Some of them use violence to offer a commentary on the nature of violence and its ramifications, but some of them are just super-cool and happen to have blood splattering everywhere.

Violence is nothing new to comic books. You might even say it’s intrinsic to the medium; after all, Superman and Batman didn’t start fighting crime in the 1930’s with sit-ins and hunger strikes. They were fighting crime, not politely asking crime to stop for the good of society. Except for the implementation of the Comics Code Authority and and the downfall of EC Comics in the mid-50’s, comic books have always had some level of violence. As a side note, the CCA led to unfortunate things in the 1950’s such as issue #241 of Action Comics (1958),Â wherein the Man of Steel attempts to figure out who broke into the Fortress of Solitude, only to discover that it was Batman, who was surprising Superman to celebrate the anniversary of him arriving on Earth. That’s a real thing.Â Check it out. 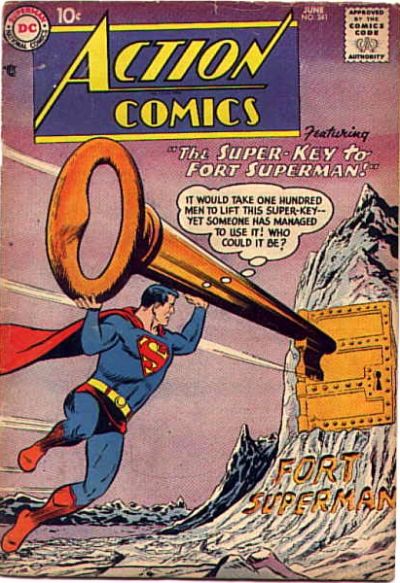 But I digress. Violence, for better or worse, is something that is ever-present in comics. It may be surprising to think through this, considering the fact that comics were originally marketed to children (and still are; it was particularly upsetting to read Batman: Detective Comics #1 last fall and see ads for Legos in an issue that ends with the Joker having his face flayed off and nailed to a wall). 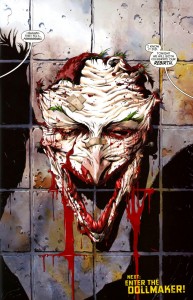 That’s pretty damn gruesome. There are Lego ads in the same issue as the above, implying that DC knows that A). edgy violence sells issues, and B). children will read this. IÂ don’t necessarily take issue with the violence itself (that’s one of the more interesting cliffhangers of all of the New 52), but I do take issue with seemingly marketing this to children.Â Keep in mind, this happens in a comic that follows the same character who surprised his best friend Superman with a lively scavenger hunt 50 years ago. It’s safe to say comics have come a long way in the last 50 years.

So I’m ok with violence in comics. But recently, that was tested. I read something based on the recommendation of my good friend Preston. It’s the first story arc of an “extreme horror” comic called Crossed, written by the always edgy Garth Ennis, drawn by Jacen Burrows, and published by Avatar Press. Crossed follows an increasingly small group of Â survivors of a (sort of) zombie apocalypse.Â Â As a big fan of horror movies, I have a pretty strong stomach when it comes to gore , but I was not prepared for Crossed. I’m not sure anyone is. 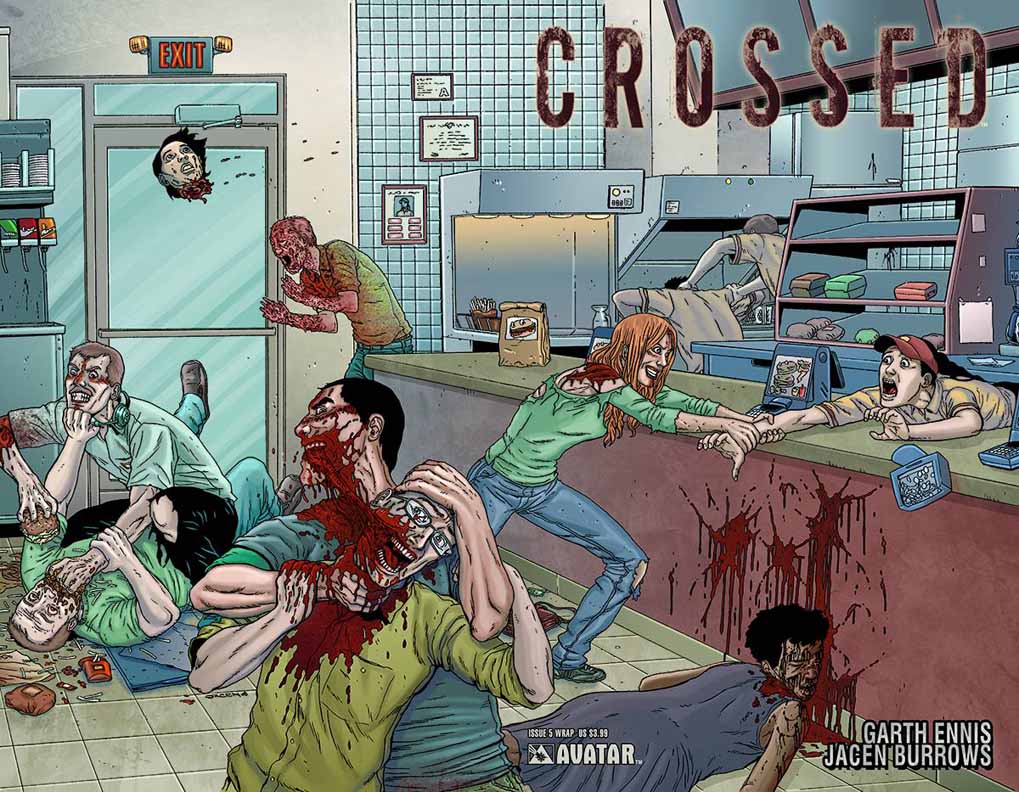 Sorry about that. Like I said, you probably weren’t prepared for that. That’s actually one of the tamer covers. If you Google Crossed (and please don’t do this at work), you will find all the art depicting awful things I didn’t feel comfortable posting.Â I read about half the first issue, then shut the trade paperback and turned on Family Feud. Five minutes or so later, I picked it back up and ultimately read the entire thing in one sitting. And you know what? I liked it (perhaps against my better judgement).Â Crossed is prefaced by a monologue from the protagonist about how our society can no longer be shocked, and that no one believed the first footage of the zombie apocalypse was real. So Crossed has a question at its core: if the hypothesis that society can no longer be shocked holds true, how will readers react to the extreme violence that’s coming? I think the way this thesis works at the beginning of the first issue makes the violence, if not more palatable, at least more within the context of the work as a whole. Additionally, I also really appreciated the surprisingly sentimental note on which it ends, leaving readers with a sense of hope (which almost seems to undermine the tagline of Crossed: “there is no one here to save you”). All this being said, I can’t in good conscience recommend something like Crossed, especially considering that once it was handed off to David Lapham and Javier Barreno, the series has descended into something so foul it’s not fit for human consumption. But, whatever it says about me, I liked Garth Ennis’s Crossed. Dammit, I liked it. As a side note, the original creative team of Ennis and Burrows is apparently returning with a new story-line in March. Hopefully that will be less foul and more readable than Lapham’s work. It wouldn’t take much.

Whether you have the stomach for rape zombie comics, or you prefer your comics a little less littered with mangled bodies and human entrails, the next time you read something, think about the violence in it, and whether it contextually belongs or is there as window dressing for a weak story or an attempt to sell comics based on shock value. But don’t feel too bad if it’s one of the latter and not the former, because everyone has their guilty pleasures. I personally love DC’s newÂ Suicide Squad , which is unapologetically violent and sensationalistic, but also one of the most fun reads in the New 52.

But no matter what comics you end up picking up, above all, always support your local comic book stores. They’re owned by great people, and you’ll have a great time talking about what you’re reading with them.

Supurbia #1, Grace Randolph and Russell Dauterman: Supurbia, which launches today to all sorts of hype, is being billed as a Desperate Housewives take on the Justice League. It follows the spouses of superhumans living in an upscale gated community somewhere. It looks pretty funny. 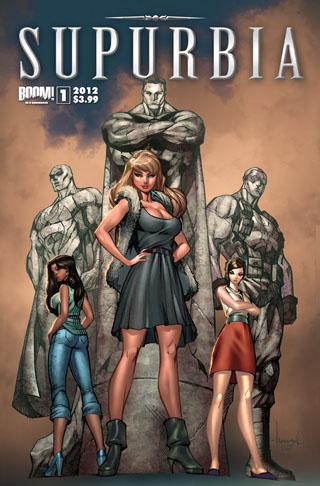 Fatale #3, Ed Brubaker and Sean Phillips: If you’re not familiar with the previous collaborations of Brubaker and Phillips, go buy the trade paperback ofÂ Criminal, Vol. 1. Go ahead. I’ll wait. Ok, so now read it and have your mind blown by how intelligent and masterful it is. Fatale has the same gritty-yet-humanist approach to storytelling as Criminal, but with an added wrinkle: there’s a bizarre Lovecraftian horror element to it, making it a genre-bending masterpiece in the making. Read it. In fact, read everything by Ed Brubaker. He’s that good. Full disclosure: I was unaware of Brubaker and his brilliance until Grace Gordon and Brandon Stauffer from the SNIKT! podcast told me I HAD to read something by him. I am now a convert. Thank you, Grace and Brandon.

Catwoman, Vol. 1: Trail of the Catwoman, Ed Brubaker and Darwyn Cooke: Just to continue my love-fest for Ed Brubaker, his excellent run on Catwoman from the early 2000’s is finally back in print. I actually found all 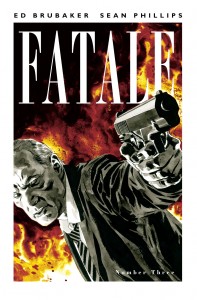 How can you not want to read this? Cover art by Sean Phillips.

four trade paperbacks online for fairly cheap when they were out of print, so if you don’t want to shell out $29.99 for the collection, you might look into that. Wait, no; support your local comic book store and buy the back issues, which are widely available for not very much. Either way, Brubaker’s Catwoman raises the ubiquitous Gotham figure from being a sex object (as she is so often portrayed) to being a real, thinking, feeling, strong character. The first few issues have a wonderful story arc where Catwoman goes on the hunt for a killer who’s murdering prostitutes in Gotham’s East End; Batman isn’t concerned, because in his black and white worldview the criminal element is weeding itself out. Catwoman goes on the case, deciding that no matter who the victims are, they have a right to live. It’s this sort of subtle depth and commentary on not only Selina Kyle but also Batman’s moral code that makes Brubaker such a talented writer. Read him. 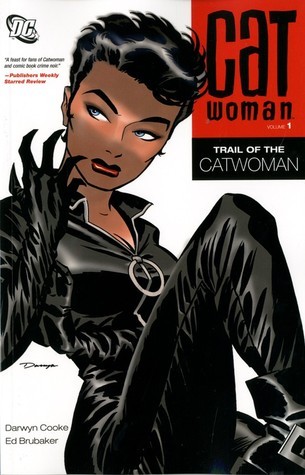