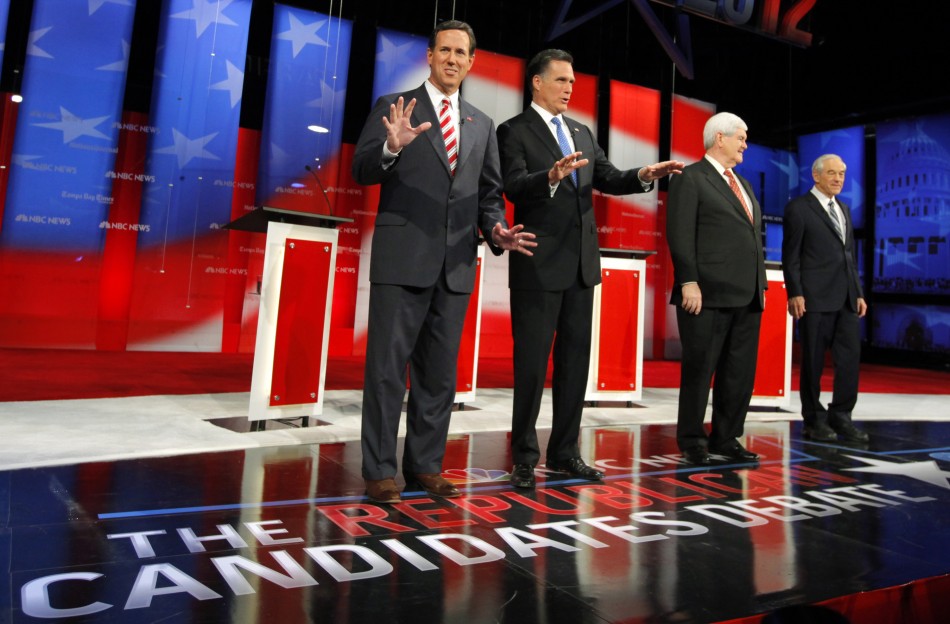 If youâ€™re planning on voting on March 6th in the GOP primary, it might be nice to know a little about each candidate.Â  Hereâ€™s a quick overview of the four men seeking the Republican nomination.

Mitt Romney: Former Massachusetts Governor, former head of Bain Capital.Â  Mitt has maintained his front-runner status for the majority of this election.Â  His secret: having the most funding of any of the other candidates, as well as the biggest Super-PAC.Â  He has come out and said all the things you would expect of a candidate seeking conservative votes.Â  However, his record does have some more moderate or even liberal (gasp) entries.Â  He oversaw a health plan in Massachusetts which is similar to Obamacare and has also run as a pro-choice (or at least anti-pro-life) candidate in the past.Â  His focus is primarily on creating jobs, reducing spending, and cutting taxes on the â€œjob creatorsâ€.Â  Like the others, repealing Obamacare is at the top of his to-do list.

Strengths: The basis of his campaign is that he can beat Obama in November.Â  He is a moderate Republican, which will help him reach across the aisle for some much needed liberal votes.Â  His true strength is in his financial backings.Â  Money is what wins campaigns (Obamaâ€™s in â€™08 did top a billion dollars), and that certainly wonâ€™t be a problem for him in the general election.

Weaknesses: The downsides to Mitt are his inability to indentify with the middle class and his penchant for not improvising well.Â  In his time as head of Bain Capital he oversaw plenty of shrewd business moves which often lead to massive layoffs.Â  He has made some poor comments about him not caring about the poor because they have a â€œsafety netâ€.Â  That, plus his attempt to bet Gov. Rick Perry $10k at a GOP debate has left Mitt with an aura of elitism.

Rick Santorum: Former Senator from Pennsylvania.Â  The Iowa caucus winner (maybe), Sen. Santorumâ€™s ideals are much more conservative than the others.Â  As one would expect, he holds the Republican core values of securing borders, repealing Obamacare, and cutting taxes.Â  In line with the Tea Partyâ€™s views, he has emphasized his desire to slash $1 trillion from the deficit by cutting spending.Â  As the most conservative of the four, he favors a pro-family, evangelical approach to social issues.Â  He came out not only anti-abortion, but also anti-contraceptive prevention.Â  Without the consideration of who can beat Obama, Santorum would be the likely GOP nominee.Â  This is apparently true, as he has recently surged in the polls and looks poised to take down Mitt Romney.

Strengths: He is a true, evangelical conservative.Â  Aside from switching to an anti-earmark stance, he has been consistently in line with core Republican views.Â  His sheer hard work meeting his constituency face-to-face is what has kept him in the race.

Weaknesses: He has no moolah.Â  He doesnâ€™t have Romney-sized Super-PAC willing to spread Santorum on the airwaves.Â  His proposed tax cuts have also been criticized for raising the deficit $1.3 trillion.Â  As ideal as he is to conservative voters, his nomination would give Obama an almost certain re-election.Â  His overly conservative social values will make it very hard to get any moderate votes come November.

Newt Gingrich: Former Speaker of the House.Â  After sweeping South Carolina following a monumental debate win, Newtâ€™s campaign has really fizzled out.Â  His attempts to win over the Evangelical vote have taken a hit because of his two divorces after affairs and then remarriages to the mistresses involved.Â  On top of that, he was the first Speaker to ever be reprimanded on ethics charges.Â  Besides having the core conservative values, he has run his campaign on him being a non-Washington insider (although he was Speaker) who wants a smaller government.Â  He has also made it a priority that America does nothing to undermine national security in the way of budget cuts.Â  Newt has a very strong base, but has lost the money war against Mitt, and is trailing in a distant third in most polling data.

Strengths: Whether or not he is a Washington insider, he does have experience in the Capitol.Â  He also has a record of being more consistently conservative than Gov. Romney.Â  Unlike Mitt, he does do well on his feet, as seen by his stellar debate performances.

Weaknesses: His morals are definitely questionable, which make most voters see him as un-trustworthy.Â  His promise to immediately repeal Obamacare was in no way unique, but his promise to build a moon base by the end of his second term was.Â  Although he does well on his feet, his plan for a lunar State indicates his policies might not always be well thought-out.

Ron Paul: Sitting Representative from Texas.Â  Ron Paul was at one time a physician before his five-decade-spanning political career began.Â  As a Libertarian, Ron Paulâ€™s views arenâ€™t quite in line with Republican ideals.Â  He was the only Republican to vote against the Iraq war in 2002.Â  His social views tend to be more liberal (but he is pro-life).Â  He prefers a strict interpretation of the constitution.Â  He wants the smallest government of the four and to lower costs of healthcare by deregulating the insurance industry, hoping competition will bring down prices.Â  His economic views focus on reducing inflation, possibly by going back to the gold standard.Â  His views on government involvement are considered to be the basis of the Tea Party movement.

Strengths: Rep. Paul is very economically savvy.Â  He is definitely the most intellectual of the candidates.Â  He explains his values in a straightforward manner, really breaking down the issues in a manner that adds little spin.

Weaknesses: Rep. Paulâ€™s problem is he isnâ€™t really Republican.Â  Even though he wants to shrink government the most, his views are usually considered too radical to be taken seriously.Â  There is a growing feeling that his campaign is focusing on pushing the Libertarian movement instead of winning the election.Â  Candidates often want to â€œshake up Washingtonâ€, but Paul really seems to overdo it.Â  Without the big-time backers and rarely being taken seriously, Ron Paul efforts to get nominated seem to be in vain.